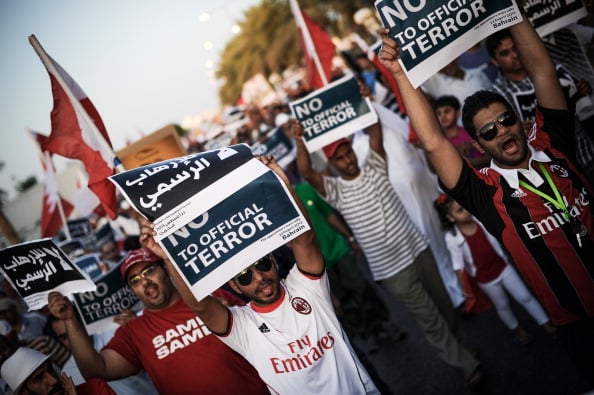 Thousands of Bahrainis were allowed to march peacefully outside Manama calling for democratic reforms on Friday, 10 days after police cracked down on scattered protests organised by an online group inspired by recent demonstrations in Egypt.

“We are here … because we want freedom. We are used to oppression, and teargas and beatings,” said Hayat al-Abbar, a 38-year-old secretary who joined the march.

Bahrain, which hosts the U.S. Fifth Fleet, has been buffeted by bouts of unrest since February 2011 when an uprising led by the Shi’ite majority demanded the Sunni al-Khalifa dynasty give up power.

The authorities crushed the revolt, killing at least 35 people, but small-scale protests and clashes have persisted, putting Bahrain on the front line of a tussle for regional influence between Shi’ite Iran and Sunni Saudi Arabia.

“We seek our freedom and dignity and will never forget those who sacrificed their lives,” Friday’s protesters chanted.

Police stayed away from the march, which was organised by the country’s main opposition parties and took place west of the capital.

The Bahrain government in July passed a law banning all protests in the capital Manama. King Hamad also toughened penalties in anti-terrorism laws.

On Aug. 14, the authorities fired tear gas and birdshot to disperse demonstrators responding to an online call for street action by a new activist group calling itself Tamarrod, according to witnesses.

The group was inspired by the movement of the same name that helped muster massive protests against Egyptian President Mohamed Mursi before the military removed him on July 3.

The Bahrain opposition demands a constitutional monarchy with a government chosen from within a democratically-elected parliament. It complains of discrimination against majority Shi’ites in areas such as employment and public services, which the government denies.

“Where are the jobs? … We will not bow to anyone but god. We are not scared of anyone and I’m ready to die for my country,” said Abdelghani al-Marzouq, a 51-year-old engineer who was at the demonstration.