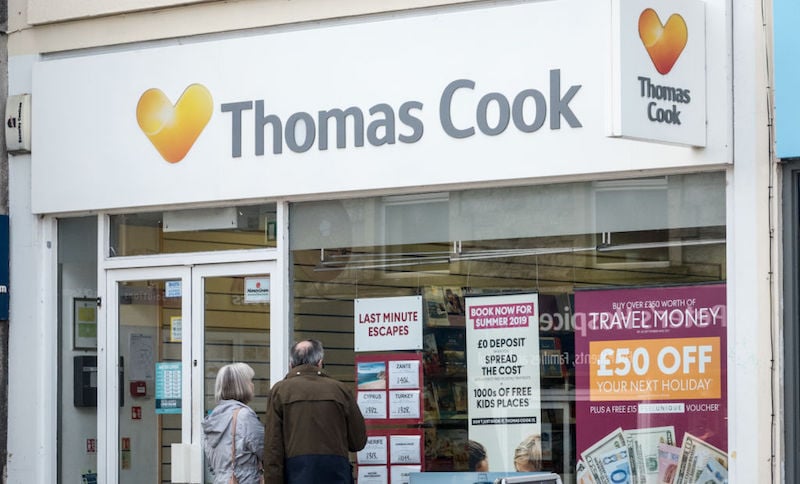 Thomas Cook Group Plc collapsed under a pile of debt after talks with creditors failed, forcing the British government to hire charter planes to bring thousands of the 178-year-old U.K. travel provider’s customers back home.

The company filed for administration early Monday after eleventh-hour negotiations to raise additional funding failed to result in a deal. The move saw all bookings, flights and holidays with Thomas Cook canceled, sparking panic online among travelers. In what it called the “largest repatriation in peacetime history,” the government said it would work to return all those booked to come back to the UK over the next two weeks free of cost.

The collapse spells the demise of what is one of the the UK’s best-known brands, and caps months of talks with Thomas Cook’s investors, led by Fosun Tourism Group. The Chinese firm, which owns the Club Med resort chain, proposed a $1.1bn bailout in exchange for control of Thomas Cook’s tour operations and a minority stake in its airline. Last week, the London-based company said it needed 200m pounds ($250m) more, leading to the rapid unraveling of its rescue prospects.

“Although a deal had been largely agreed, an additional facility requested in the last few days of negotiations presented a challenge that ultimately proved insurmountable,” said CEO Peter Fankhauser.

The company is one of the most high-profile casualties of the travel business’ decades-long shift online and the malaise affecting the European holiday market. For decades, tour operators such Thomas Cook and Germany’s TUI AG thrived by offering package holidays to sun-starved Europeans. But the rise of discount airlines and web distribution have squeezed profits in an industry that is highly seasonal and prone to shocks from terrorism to political turmoil.

Some 150,000 British citizens have been left stranded overseas, while another 350,000 foreign nationals are also abroad on Thomas Cook vacations, according to the Financial Times.

Travelers on Thomas Cook vacation packages and flights were advised by the British government not to cut short their trips, with the civil aviation regulator planning to repatriate customers as close as possible to their booked return date. The government will also cover the cost of accommodation for Thomas Cook customers.

The collapse deals another blow to the European travel sector, just months after the bankruptcy of Icelandic budget airline, Wow Air. The carrier shut down its operations in March due to lack of financing, leaving 2,700 fliers stranded and hurting the country’s economy.

Thomas Cook filed for administration early Monday at the High Court in London. AlixPartners LLP was named an adviser and will work with the aviation authority to bring customers back to the U.K.

Fosun Tourism Group said in a statement Monday that it was “disappointed” Thomas Cook was unable to find a solution.

“Fosun confirms that its position remained unchanged throughout the process, but unfortunately other factors have changed,” the company said. “We extend our deepest sympathy to all those affected.”

Shares of Fosun Tourism Group dropped as much as 5.5 per cent in Hong Kong on Monday before paring losses.

The last-ditch rescue bid proposed swapping existing debt into shares, leaving Fosun holding the majority of Thomas Cook’s tour-operating business while creditors would have controlled its airlines. The company had debt of almost 2bn pounds as of March 31, according to data compiled by Bloomberg.

But the challenges eventually proved insurmountable. A group of hedge funds began to organise to block the plan because it would stop them from cashing in on holdings of credit-default swaps that pay out when a company defaults. There was also concern customers would stop buying vacations and flights from Thomas Cook for fear the company wouldn’t be around to honor their bookings.

The UK government pushed back Sunday against suggestions it should step in to rescue the company, with Foreign Secretary Dominic Raab saying there was no strategic national interest for doing so.

Prime Minister Boris Johnson defended the decision to refuse a government bailout that he said had been requested, worth about 150m pounds.

“That’s a lot of taxpayers’ money,” he told reporters on his way to New York for the United Nations General Assembly. “It sets up a moral hazard.”

Johnson Zeroes in on Directors’ Role After Thomas Cook Failure

Founded in the 1840s by a Victorian entrepreneur of the same name, Thomas Cook started out by running train trips through the English Midlands. The business expanded as Britain’s growing middle class discovered they had more time — and money — to discover the delights of Europe.

Briefly absorbed into the state rail company soon after World War II, the company got its biggest boost in the 1970s and 1980s as Britons sought the sun on a cheap budget. The ad slogan “Don’t just book it, Thomas Cook it” entered the national psyche.

But Thomas Cook labored under its large debt burden and the costs associated with maintaining a high-profile presence in Britain’s provincial towns. Nimbler online rivals ate into the company’s core business and a succession of turnaround plans failed to stick, while the sluggish European vacation market and uncertainty over the economic impact of Brexit also more recently crimped demand.

The slowing global economy and signs of a pullback in Chinese tourist travel may have prevented Fosun Tourism from upping its bailout package. The company, which bought into Thomas Cook in 2015, “is probably concerned about spending too much to get too little on their investment,” said Andrew Collier, managing director of Orient Capital Research in Hong Kong.

“This marks a deeply sad day for the company which pioneered package holidays and made travel possible for millions of people around the world,” CEO Fankhauser said Monday.