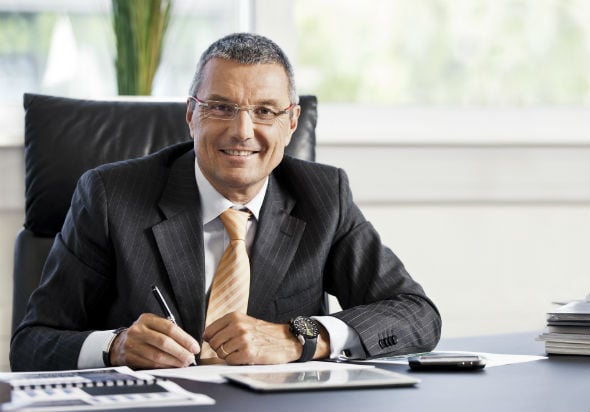 “My mother drove me to the airport and was very frantic as I was only 16 going backpacking alone in Greece and, to make sure I would come back, she brought me this Timex mechanical watch. She reset the date herself and would say ‘Rewind it every day so that you don’t miss your return flight’ – because it was a manual watch back then. And believe it or not I still have it and it’s still working.”

Jean-Christophe Babin chuckles warmly as he describes to me how he came to own his first watch – the beginning of his love affair with timepieces.

Babin has come a very long way from the 16 year old reliant on a wind-up watch to ensure his safe return. He’s now president and CEO of TAG Heuer – one of the world’s most established and respected watch makers; a luxury global brand.

Babin, or ‘JCB’ as his staff affectionately refer to him, has worked his way up the corporate ladder including senior positions at Procter and Gamble and Boston Consulting Group among others, before landing his current role at TAG 12 years ago, and it’s hard to imagine a global boss who appears happier.

“Every morning when you wake up not only do you think how exciting the brand is to the outside but how exciting it is to the inside to be stimulated all day long with so different people, so creative, so innovative,” Babin says, as I ask him what it’s like to be the head of such an aspirational brand.

“On the one hand it’s a very knowledgeable company but at the same time it’s a very Silicon Valley driven company – we have a lot of young talent, men and women alike from the best universities, watch-making schools and engineers’ research centres. So it’s an incredible melting pot of young talent who are all obsessed by trying to push forward and further timing and chronometry.”

With its 150 year history weighing on Babin’s shoulders, TAG Heuer has a reputation as a reputable business to uphold as well as being a glamorous brand to be seen wearing. According to the man who wears a TAG on each wrist, the books are healthy.

“After nine months we are again well ahead of our targets and if that continues over Q4, once again we’ll break our sales and profits records, which is very positive,” said Babin.

“Last year we had a record year in terms of sales and profits and the fact that this year we are capable to repeat a quite similar gross rate in a tough environment says a lot about the brand’s attractiveness.”

Indeed it does. As the rest of the world recovers from the financial downturn, it’s testament to the brand that TAG Heuer’s clients – both old and new – continue to keep the Swiss timekeeper in pocket.

So what of TAG Heuer in the GCC and its cities which love a luxury brand? Surely a breeding ground for TAG’s watches, smart phones and glasses?

“The Middle East has this year so far been one of the driving regions,” said Babin. “Dubai remains our largest country in the Middle East for sure, but also we have very good sales in Qatar, Kuwait, Saudi Arabia and Iran is doing quite well despite all the political tension.

“We’re opening in Tehran our largest flagship in the Middle East so we keep innovating not only in terms of product but in terms of retail, having in mind not a short term strategy but a long term.”

Is Babin really expecting huge growth in Iran? “Maybe not in the coming months because with the embargo it makes life tougher,” he admitted. “But in luxury and in watches in particular you always have to look at the longer term perspective. Sitting now for sure will mean a big harvest in a few years down the road, compared to brands which are shying away right now.”

TAG Heuer also has on its books a short but elite list of a few of the world’s most notable achievers to count on as celebrity ambassadors – one of the many developments credited to Babin’s reign.

Leonardo DiCaprio, Cameron Diaz, Anna Kournikova and Lewis Hamilton are some of the names from the Hollywood and sporting worlds who wear their TAG Heuers with as much pride as it is their duty.

At the time of meeting however, Babin wasn’t 100 per cent sure Hamilton would still be on that exclusive list next year.

The British Formula 1 driver recently announced a switch from his lifelong McLaren team to Mercedes and Babin is yet to decide if that will affect the TAG Heuer relationship.

“We’ll see you know, understand that I’ve had no time yet to discuss with him as this was announced last week,” Babin said at the time of meeting. “I met with him 10 days ago in Singapore but it was not announced yet, so I knew it was 50/50. Now it is clear, he goes to Mercedes.

“I don’t know yet [if Hamilton will still be a TAG Heuer ambassador in 2013]. I don’t exclude it but I still have to think about it also.”

Going against the famous saying, the sky is not quite the limit for this seemingly flawless company as a trip into space is next on the agenda, though it will be a revisit rather than a debut voyage.

TAG Heuer lays claim to being the first watchmaker to send a watch into orbit on the wrist of astronaut John Glenn aboard the Mercury Atlas 6 in 1962 and the company is preparing to repeat the feat later this year, launching a re-model of the watch Glenn took on-board.

It’s extremely unlikely though that space will be the final frontier for TAG Heuer. With ‘JCB’ at the helm, more gravity-defying feats are surely a matter of time.