The Other Vienna - Gulf Business 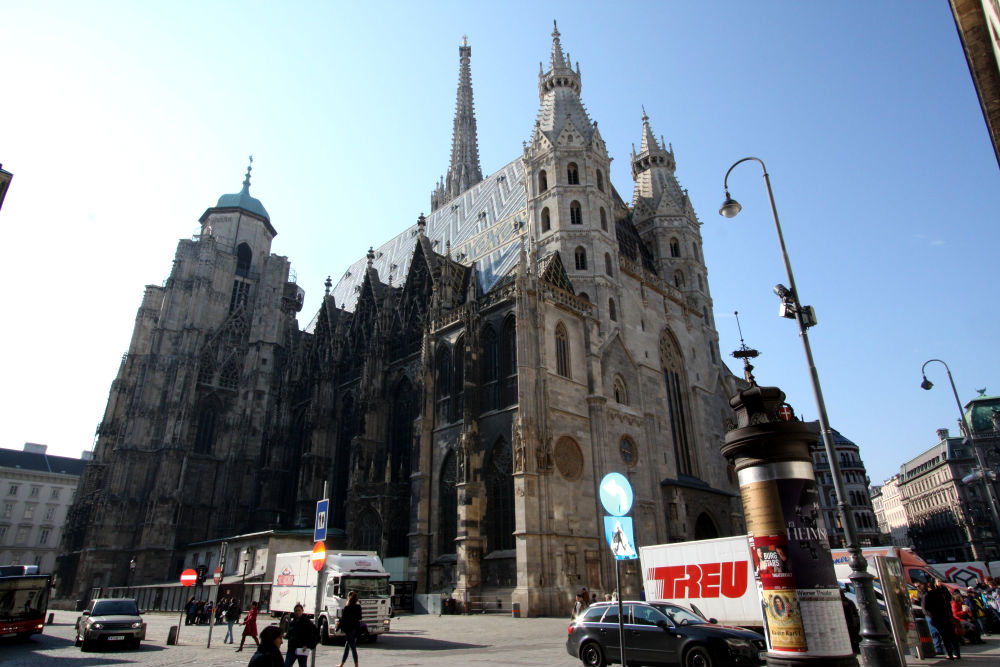 “Before I retired, I travelled lots on business,” said my elderly taxi driver as we drove towards Schonbrunn Palace. “I’ve visited every major city in the world, but none of them come close to Vienna.” “What’s so special about Vienna?” “Well,” he said, “It’s a beautiful city, but it’s also the people. Plus we have a good lifestyle – music, culture, food, history, nature. Vienna has everything.” He wasn’t the first to tell me that during my stay in Vienna, nor would he be the last.

Now before you conclude that the Viennese need an attitude adjustment, consider the following. For three consecutive years (2009-2011), the human-resource-consulting firm Mercer ranked Vienna first in its annual ‘Quality of Living’ survey of hundreds of cities. The Economist Intelligence Unit ranked Vienna first (in a tie with Vancouver, Canada) for quality of life in 2005, and last year Vienna came in second, behind Melbourne. The Innovation Cities Index, who’s scoring system covers culture, infrastructure and markets, ranked Vienna first in 2007 and 2008, and second in 2009. Plus the five million tourists who visit Vienna annually can’t all be wrong.

Just in case you’re wondering, because I did, it is quite common for Viennese pensioners to drive taxis two afternoons or so a week. My taxi driver told me he did it “to break the monotony of retirement, have some fun and to meet people.” He assured me he didn’t do it for the money, which would have made his business travel story rather suspect.

But let’s get back to quality living. The previous day I had checked into the Hotel Topazz, strategically located in the historic 1st district and a stone’s throw away from the imposing Stephansdom (St Stephens Cathedral). This 31-room, design hotel pays homage to Vienna’s artistic heritage of the late 19th and early 20th century. The exterior is something to marvel at with its large oval windows, while the interior is equally tastefully done.

But however alluring the hotel room is, you won’t be spending much time in it – not with 60 museums, cathedrals, luxury shopping, music venues, dining and famous coffee houses all within easy reach.

Sauntering through Dubai malls I’m always struck by how repetitive the shops are. Vienna is the opposite – especially when you are walking along the ‘Golden U’, which consists of Kärntner Straße, Graben and Kohlmarkt. This central shopping area is seriously bad for one’s cash flow. The wide, pedestrianised cobbled streets house everything from the standard high-street brands to high-end brands. But the most interesting shops are the ones you’ll only find in Vienna. A case in point is the Österreichische Werkstätten in Kärntner Straße that was founded by Josef Hoffman and remains true to art nouveau styles. A handbag for my wife lightened my wallet by E300, but then you can only buy it in Vienna or online.

Another Vienna institution is Lobmeyr, a shop famed for its crystal chandeliers and glassware since 1823. Andreas Rath, the affable managing partner, explained the history and processes behind their works of art. For example, the Lobmeyr chandelier workshop has over 10,000 cast models, which allows for the authentic recreation of every style of chandelier plus creating endless possibilities for new ideas. An interesting Middle East connection is that you will find Lobmeyr-supplied chandeliers in many mosques, including the Holy Mosque in Mecca. The items in the shop are as beautiful as they are pricey, with the smallest chandelier starting at five figures. A more affordable option for crystal-lovers is Swarovski’s Vienna headquarter in in Kärntner Straße.

One thing I love about continental Europe is the bakeries and delicatessen that entice you with great smells and amazing window displays. It’s one thing getting a great cup of coffee and a freshly-made sandwich at seven in the morning. It’s quite another to be served by a wide awake and friendly Viennese shopkeeper. But the granddaddy of all delicatessens has to be Julius Meinl am Graben, an epicentre of epicurean delights that stretches over three floors and offers more than 16,000 delicacies. Meinl’s Restaurant, on the first floor, is one of Austria’s top five restaurants and offers tables with unique views down Graben and Kohlmarkt streets.

Another gourmet establishment with a view is the DO & CO Restaurant in the hotel of the same name on Stephansplatz. For an absolute treat you can reserve the glass-walled VIP section right on the roof with a stunning 360-degree panorama of Vienna. We were there at sunset, the perfect time to see Vienna’s rich architecture and the Stephansdom turn orange before fading into dusk.

After dark, Vienna remains lively and cosmopolitan. Now we all know about Vienna’s great balls and the famed Vienna State Opera, but there’s much more going on. A case in point is the Albertina Passage, a sophisticated dinner club situated in a former pedestrian underpass. The dishes are a mix of international and Viennese cuisine, but the daily special is live jazz. This is the place where Vienna’s beautiful people come to play, and I’ve never seen so many tall, stunning and chic women in one place. In many cities this could equal to pretentious snobbery, but not in Vienna. As always, everybody is warm and friendly and the mood is upbeat. Later in the evening, when the DJ takes over, the Albertina Passage becomes a happening nightclub.

During my wanderings I had come across the famed Loos American Bar that has been in business since 1908 and is famed for its minimalist interior and maximum atmosphere. This small, crowded place counts George Clooney and Brad Pitt among its patrons, so it seemed the perfect spot for a nightcap. This is a place where you just squeeze in wherever there’s space, and you’ll end up making new friends until the early hours.

Vienna, up to this point, had been solely explored on foot. But my Vienna Tourism hosts had a surprise in store for us the next evening when two 1958 Rolls-Royces pulled up in front of the hotel. These two classic beauties belonged to Dr Jakob Barnea, who started his car collection as a medical student. Driving our ‘Princess-Royal’ was none other than the good doctor himself, a jovial man who clearly was enjoying himself. As we drove along the Ringstrasse the Viennese rush hour commuters looked at the car fondly, but totally ignored the occupants.

The same was true when we stopped at the huge Hofburg Palace that has housed some of the most powerful people in European and Austrian history. People were clicking away at the cars, while we enjoyed the sunset. Then it was off to the vineyards for a typically laidback dinner in a traditional Austrian ‘Weinstube’. Here the ethos is to eat and drink at leisure, this being as much a social event as about food.

Vienna has no shortage of historical figures, ranging from the Habsburgs to Johan Strauss and Dr Siegmund Freud. But one person who is seemingly unavoidable is Gustav Klimt, a prominent member of the Vienna Secession movement. After seeing Klimt exhibitions advertised all over town, I decided to head to the Belvedere Museum to view his most famous work ‘The Kiss’. The Belvedere Museum is housed in one of two Baroque palaces and has plenty of other artworks. But if art isn’t your strong suite, the architecture and the palace gardens are worth the trip.

For something more down to earth the Naschmarkt is highly recommended. This market, which has been around since the 16th century, has more than 120 stands that offer everything from vegetables to cheese and seafood. But it also has some pretty unique Viennese touches, such as the stand that specialises in vinegars and salad dressings. I write plural for vinegars as there is an astounding array sequestered in the small wooden barrels. The stall owner is more than happy to dispense advice and let you have a taste. Inevitably, you will buy something.

Naturally, there are also plenty of restaurants there, many with sunny outside terraces. We stopped at Orient & Occident, which whips up Turkish cuisine with an international twist. But there are plenty of other alternatives. On Saturdays there’s also a fleamarket next door that sells everything under the sun.

There was one more ‘must do’ tourist attraction on my agenda, and that was Schonbrunn Palace. This former 1,441-room Rococo Palace is set in beautiful parklands, and everything is on such a grandiose scale that not even the numerous tour groups can fill it up. To do true justice to Schonbrunn Palace you need at least half a day, so I only got a taster during my one hour there. Definitely worth another visit.

Actually, Vienna is definitely worth another visit. In four days and armed with the excellent planning of Austrian Tourism I still felt like I’d just scratched the surface. After two full days I had seen plenty of the 1st district, but by no means had I exhausted its possibilities. For one, I didn’t manage to scratch the famed Sachertorte off my to do list. In fact, I didn’t even visit one of Vienna’s coffeehouses, a sad oversight on my part.

But the lasting impression – and perhaps the city’s main attraction – is the people. Everything seems to work in a laidback and fairly egalitarian way not what you’d expect from a former Imperial city.

One late evening we were standing opposite the Vienna State Opera at what may perhaps be the best-frequented ‘Wurstbude’ (sausage stand) in the city. The patrons were a curious mix of city suits, clubbers, tourists, old and young. When the opera comes out, men in evening suits and ladies in all their finery join the queue for a snack while dissecting the evening’s performance. You won’t find that in any other city, which brings me back to my taxi driver. He knew what he was talking about.