The Other Face Of Nepal | UAE News 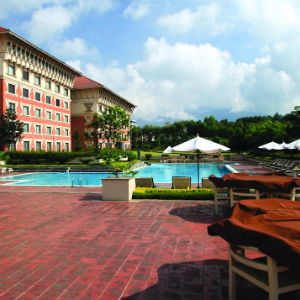 The Nepalese capital has long been known as a backpacker’s paradise. Scruffy tourists fresh from Himalayan treks are easy to spot in Kathmandu. But if you set off the patchouli-scented path, a more luxurious respite can be had in the city.

Our first taste of Nepali luxury came at the grande dame of the capital’s hotels, Dwarika’s. Hidden by brick walls from the city’s streets, the hotel is a cluster of brick buildings of various sizes scattered across a tree-filled compound. Originally built in 1952 as the family home of its founder, Dwarika Das Shrestha, the hotel has expanded over the decades. Today, Dwarika’s is a living experiment in preserving Nepali heritage, especially its architecture.

In 1952, Shrestha saw carpenters sawing off the intricately carved window and door coverings for firewood. Alarmed, he created a workshop on his property that would not only house these carvings and others he bought throughout the valley, but also the master craftsmen of this dying art so that they could teach others.

The end result is a secluded mini-village in the middle of bustling Kathmandu that provides guests a serene spot to relax and rejuvenate. We especially enjoyed meals outside in the sun-dappled courtyard where the resident dogs and cats would come around and beg playfully. On Friday nights, Dwarika’s holds its weekly barbecue, now a Kathmandu tradition, which features grilled meats from beef to boar and a wide selection of both western style and Nepali vegetable preparations.

But for us, Dwarika’s signature culinary experience is that at Krishnarpan, its Newari cuisine restaurant, which offers diners the chance to sample traditional Nepali hospitality in sumptuous surroundings.
So if Dwarika’s is the yin of Newari hospitality, the Hyatt Regency Kathmandu represents the yang. The american hotel chain built its property here as a “city resort” stretched over 37 acres and looks like it might have been an old Nepali plantation home.

What appeals about the Hyatt is its familiar luxury. After a day immersing all five of our senses along the streets of Kathmandu, the hotel was a tranquil home to which to return. While Hyatt has infused the property with indigenous touches with the herbal bath products and a Nepali-style front lounge, the hotel has kept faithful to the look and feel of premier Hyatt rooms worldwide. “The room looks like a Hyatt room,” my travel companion said. “There’s something nice about knowing exactly how everything will be.”

The Hyatt is conveniently located just a few kilometres from the Kathmandu international airport, making it an ideal stop for the start of a Nepal trip, or an end to one, as it was for us. The day before our evening departure, we took another quick trip to the Boudhanath stupa – the most holy of Tibetan Buddhist shrines outside Tibet and also a UNESCO World heritage site only a 10-minute walk away.

Families will find the hotel especially appealing as a place to relax and unwind amidst the himalayas. The “backyard” contains two pools, one reserved for children, three tennis courts and a 1,600-metre jogging track around the hotel grounds.

During our stay there, a monsoon pounded its way through the city, so we stayed in and enjoyed a cozy dinner at Rox Restaurant and Bar. And we got the chance to savour a rare but welcome luxury for Dubai-dwellers: rain.