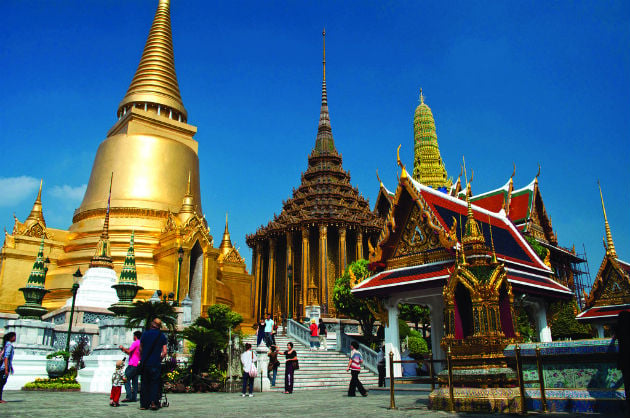 The golden palace featured in The King and I is nowhere near as crowded as the real palace where King Mongkut employed Anna Leonowens. If Yul Brynner’s king were to see so many visitors crowding into Bangkok’s premiere tourist attraction today he’d probably sack all the royal guards, if not chop off their heads. But there’s no doubting that the Grand Palace has to be visited.

The palace was built in 1782 and is a showcase for the red roofs, gold-tipped finials and elaborately carved serpent guardians of Thai architecture, while also offering an eclectic mix of styles. as you enter there are long, green nineteenth century lawns that resemble an oxford college and the chakri Maha prasat, built by chulalongkorn, son of King Mongkut looks like a French town hall. When it was constructed in 1882 there was an outcry that the king had gone too far in his admiration of Western architecture and so a gold, multi-layered roof, typical of Thai temple architecture, was added.

My personal tour guide, Jeed, leads me on a tour to what is called the Upper Terrace, which is where the most distinctive buildings are grouped. here we see the Phra Siratana Chedi, a glittering gold-tiled stupa that is said to contain the remains of the Buddha. next to that is the lofty Phra Mondop, a library for Buddhist scriptures guarded by fierce golden demons with goggle eyes and tusks. This marble terrace also houses the red and green Royal pantheon where the kings of Thailand are commemorated. Sadly the Temple of the Emerald Buddha is closed to visitors but we do see a cement scale model of Angkor Wat. This was commissioned in the nineteenth century after this famous world heritage site was lost to Cambodia.

There is so much to see in the palace grounds that it’s tempting to stay too long out in the sun, dodging between shadows to get the best photos. Jeed and I take refuge in a very long gallery called Hor Phra Ganfharrat decorated with exquisite scenes from Thai legend. as far as I can tell tusky demons seemed to be forever abducting Thai maidens. This brought us out to Amarindra Winitchai, the audience hall where the king would sit on a golden boat-shaped throne to receive guests.

It only a short step from the palace to the river Chao Phraya but Jeed insists we take the air-conditioned car. At the shoreline we embark on to one of the many ferries that work this busy river and cross to Wat Arun and the low whitewashed fort that guards it. This Temple Of The Dawn was built in 1767 when the Thai kings were fleeing the destruction of their old capital. The Thai court fled south and founded a new capital here at Wat Arun. The temple’s central tower is cleverly decorated in broken crockery and if you climb the steep steps to the top there is a stunning vista over the temples, stupas and palace of Bangkok.