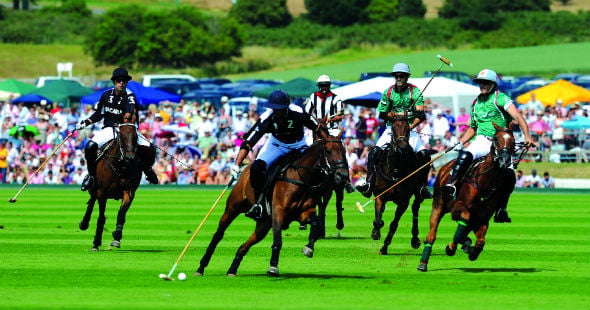 Pacing up and down the beautiful polo field at Cowdray Park in Sussex, south England, tossing a polo ball from hand to hand with increasing force, and shaking his head in frustration is Ron Wahid.

The polo team sponsored by his company, RJI Capital, have just conceded a goal that seals a dramatic 11-10 defeat at the hands of La Bamba de Areco in the Veuve Cliquot Gold Cup. It seems La Bamba’s star player Gonzalito Pieres has done the damage, scoring eight of his team’s goals. Ron wanders over, shrugs and slaps me on the shoulder. “We couldn’t stop him,” he sighs. “But we move on to the next game.”

Rather than watch the match from the luxurious marquee where waiters offer canapés and cocktails, Ron prefers to watch from the sidelines on the opposite side of the field near the holding pen for the 60-plus horses belonging to the two teams. There’s a snack truck and a toilet shed, and instead of champagne, the only liquid being sprayed here is water from hosepipes to cool down the sweltering polo ponies.

“From here, you can see the power, the speed and the beauty of polo,” explains Ron. He’s not wrong. You can also see a good deal of sweat, spit and the contents of players’ nostrils being expelled onto the pristine grass with a forceful snort.

I bet Kate Middleton’s never seen this side of polo.

Ron, the chairman and CEO of RJI, who “came to America from Bangladesh as a 13-year-old with $100 in my pocket and a one way ticket”, takes his polo seriously. He used to be a keen amateur player until a knee injury seven years ago forced him to quit. He’s due for his fourth surgery soon.

If he can’t be in the saddle, the next best thing for Ron is supporting the Enigma team with his passion, his polo nous – and his money. The one-year sponsorship deal, which began in May, is the fruition of being introduced to the team’s patron and amateur player, Jérôme Wirth, two years ago by a mutual polo player friend. Ron and Jérôme quickly found they shared a love of polo and winning, both on the field and in the office.

As we wander back to the marquee for afternoon tea, Ron explains why RJI, a boutique merchant bank set up in 1996 with offices worldwide, partnered with Enigma. “I’m doing this for the love of polo and for the success of Enigma. It’s not about RJI getting something in return.” After a pause, he adds, “I was talking to a banker earlier today and he asked me what I was gaining from this sponsorship. Not much, I told him.

“They call polo the king of sports and it is. But what we want to change is the perception that it’s a sport only for kings to watch.”

“I couldn’t care less about business today. I didn’t even bring my business cards with me. You saw me when I was watching the match, my mind was nowhere else but here. Not one person here today is a potential client.”

So why do it? “One day, when Enigma becomes a professional team, maybe there’ll be a pay off. For now, we just try our best and if we fail, we fail while trying daringly.”

A fully professional polo league in the mould of Formula One is the dream for Ron and Jérôme, a software entrepreneur who played today and is clutching his thigh and wincing. Just behind him, celebrity chef Wolfgang Puck sips red wine while supermodel Petra Nemcova negotiates the grass on skyscraper heels.

Rupert Murdoch and tennis star Maria Sharapova are rumoured to be arriving later – separately we presume. A reporter from British newspaper The Mail on Sunday is sniffing out gossip while a guy from Esquire magazine flags down another Pimm’s.

“Champagne and beautiful people do not reflect what polo is about,” says Jérôme, as a very attractive woman struts past holding a glass of champagne.

“Ron and I were fed up with the image of polo and how it is seen only from the social side.

Polo is a proper sport and a huge industry. The next step is to go fully professional with eight or 10 teams in a world league and sell the TV rights. Ron loved the idea and gave us his support. Running a polo team is expensive and I can’t do it on my own. It’s good to find a partner like Ron who shares my passion.”

Ron is adamant that polo will become a popular TV sport. “They call polo the king of sports and it is. But what we want to change is the perception that it’s a sport only for kings to watch. It’s sport for everybody. I want to see polo on TV.

I don’t know when, but I’d like to see it while I’m alive. We will push for it. Look where Formula One was and look at it now. You can compare polo to Formula One actually: the car and the driver, the horse and the player, two things working together in harmony.

The difference, of course, is that in polo it’s two living things – a horse doesn’t come with a gear stick!” Sport and business have long gone hand in hand. Tune into any major sport on TV today and you’ll be bombarded with logos, branding and billboards. Ron, 44, believes there are many parallels between the two arenas.

“Polo requires strategy, agility, vision, speed, teamwork and daring, and the ultimate goal is winning. My business is exactly the same.”

“Polo requires strategy, agility, vision, speed, teamwork and daring, and the ultimate goal is winning. My business is exactly the same.” What about luck? He smiles. “Luck is five per cent aspiration, 95 per cent perspiration,” Ron says, tweaking Thomas Edison’s famous quote.

Is he a bad loser? “Well, nobody likes losing. But at least we gave our hearts to it. Teddy Roosevelt once said something along the lines of, ‘Credit belongs to the man who is in the arena, not the spectators. Even if he loses, his soul will never be among the weak and the timid’. I believe that.”

While Ron left his business cards in the office today, Jérôme concedes that work does rear its head on days like these. “I won’t hide the fact that polo is a fantastic way to get into business relationships.

Inviting top people to a nice environment like Cowdray Park, sitting at the same table and talking is way better than having a meeting in a room.

Sport in general is a great way for business people to meet because it generates enthusiasm and starts a relationship on a good level.” Sport, after all, is what brought him and Ron together and Jérôme says they are now working together on several projects away from the polo field.

For Ron, emerging markets in the Middle East are taking up more and more of his working life, reflected in the opening of RJI Capital’s first Dubai office in March this year. “Economically and geopolitically, the Middle East is very interesting,” he says. “Look at the progress Abu Dhabi and Qatar have made. Abu Dhabi has emerged as a modern state and is doing things the right way. It’s a shining example.”

He can’t raise the same enthusiasm about his adopted homeland. “America’s main strength lies in its economy and right now our economy is not in the best position,” says Ron, a Republican who calls Ronald Reagan “America’s last great President” and a personal hero. “We have a tremendous national debt we need to get rid of and we have a leadership crisis, from the President to Congress. There’s no movement.”

With the sun dipping behind the trees, Lord and Lady Cowdray make their excuses and leave as the afternoon tea is cleared away and the last of the champagne is poured. Rupert Murdoch and Maria Sharapova never showed up, much to the disappointment of the Mail on Sunday hack.

Ron and Jérôme dissect the defeat with the exhausted Enigma team who have wandered over to the marquee to grab a sandwich and pose for the photographer from the society pages.

One last question for Ron. What’s better: scoring a goal on the polo field or clinching a business deal? “Each is a different buzz, but the spirit is the same.” He grins. “What I can tell you is that I’m much calmer when I’m doing a deal than I am when I’m watching polo.”