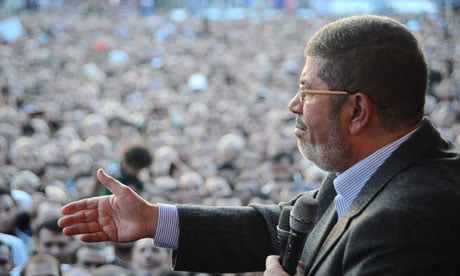 After a fight for democracy, it seems that Egypt’s second fight for economic stability will be an even tougher one.

President Mursi’s decree that his decisions would not be subject to judicial oversight, sparked civil unrest and overshadowed the recent announcement that Egypt had reached a preliminary agreement with the IMF on the terms of a $4.8 bn loan.

Even though President Mursi has sought to reassure Egypt’s judiciary that new powers will be limited in scope to ‘sovereign matters’ designed to protect institutions, and that he is committed to find ‘common ground’ with other parties, this ongoing political instability is contributing to deteriorating economic conditions. This was evident when the Egyptian EGX 30 index plunged by 9.6 per cent this Sunday, following losses of 3.9 per cent last week, making it the worst performing regional market.

“These events will put a crimp on near-term support of Egypt as an investment destination. The demonstrations and violence do nothing to help a tourism industry that’s already taken a beating,” said Ian Bremmer, president, Eurasia Group.

Due to the revolution, Egypt’s tourism industry has already collapsed, reportedly wiping out $8-10 billion of foreign reserves. The unemployment levels at more than 12 per cent are alarming, resulting in higher poverty levels and income inequality. Egypt also holds the title of net food importer, including being the world’s biggest wheat importer, for which there is no restitution, considering that it’s the most populous Arab country with a population of over 80 million.

In July this year noted economist and author, David Goldman, had stated that with diminishing liquid reserves (from $20 billion in May 2011 to $8 billion in May 2012), and rising imports, the Egyptian economy was on the edge of a collapse. Goldman was quoted as saying that Egypt is “the world’s most dysfunctional economy” heading “into chaos.”

Therefore, the IMF loan is important for Egypt. The Stand By Arrangement (SBA) contains measures to gradually reduce Egypt’s budget deficit through both tax increases and expenditure cuts, improved management and transparency of public sector finances, as well as structural reforms to improve the business environment and encourage FDI. Monetary and exchange rate policies will aim to both contain inflation over the medium term as well as ‘enhance Egypt’s international competitiveness’ and ‘increase international reserves’.

According to Emirates NBD, this language suggests some room for further managed depreciation of the EGP. The IMF statement also mentions that $14.5bn in ‘loans and deposits on favourable terms from a range of bilateral and multilateral partners’ will ensure sufficient external financing to allow a gradual adjustment of the economy, and reduce Egypt’s financing costs.

The agreement on the terms of the loan with the IMF underlines the new government’s willingness to tackle the daunting economic and fiscal challenges facing the country post-revolution in a market-friendly way. However, implementation of the program will be challenging in an environment of high unemployment and high expectations for the new government to improve living standards and incomes. Politically sensitive issues such as energy subsidy reform are likely to prove particularly challenging and the IMF has recognised that in order for the SBA to be successfully completed, it must have broad-based domestic support.

“If President Mursi and the Muslim Brotherhood show they can consolidate the government and start making sensible economic policy, the money will follow,” said Bremmer. “Since Egypt is a pretty small market there’s not much impact outside the Middle East, and there’s no oil impact. But long term, investors are looking for stability.”

A successful transition to democracy can be facilitated only by a sound economy and the economic wellbeing of citizens, which, in Egypt’s current scenario, seems like a far stretch.