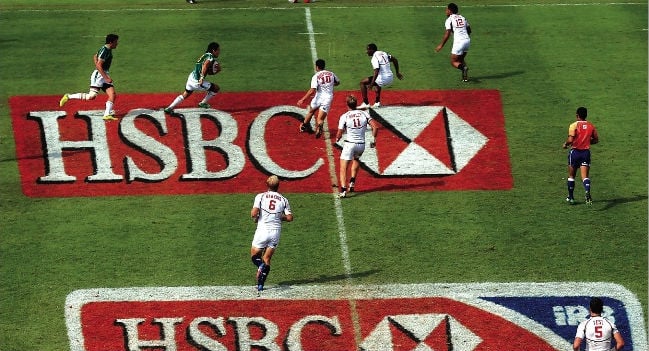 For a leading, global company in today’s business world, sponsorship – which increasingly means sports sponsorship – has become a key asset in a group’s portfolio.

What looks like a basic brand recognition exercise on the exterior, the concept of a business funding and putting its name behind a popular public event has become the norm, not least of all in the UAE with Emirates and Etihad in particular sponsoring a plethora of events, stadia and teams the world over.

In the finance sector, HSBC owns a burgeoning portfolio of sponsorship events – the annual Dubai Rugby 7s and Abu Dhabi Golf Championship among its GCC stable – establishing itself as a frontrunner in the ‘business of sponsorship’ sub-sector.

“There are always two bodies involved, there is a sponsor and there is a rights holder; they need each other,” says Andrea de Vincentiis, head of rugby sponsorship at HSBC.

Though sport sponsorship isn’t new, the theory behind it – putting a company’s name behind an event and subsequently seeing increased footfall – is still one which remains tough to measure, though as de Vincentiis explains, there’s more to it than being an income source.

“Our primary objective is from a customer engagement point of view. Yes, we see our branding on the pitch [at the Dubai Rugby 7s] and the perimeter board and that’s great, and we will measure that in terms of PR value and media exposure. But actually it’s inviting people to our hospitality, our customers, it’s giving them access to our premiere suites with free drinks and Q&As with our [celebrity] ambassadors.

“It’s a way of rewarding our customers. That is the primary way we measure it.”

HSBC has already made a large footprint in the Middle East and Asia with several branding and sponsorship deals from grassroots and developing events to globally recognised tournaments.

One thing that remains constant however is the sports: rugby and golf.

Though undeniably popular, the two aren’t necessarily the most global, glitzy or accessible – soccer, Formula One or the Olympic Games would take those titles.

But de Vicenentiis says matching the sport’s location to the company’s long-term plans has a heavy influence. As he explained, “it’s a very strategic decision”.

“Both sports [rugby and golf] are growing in the markets where we’re growing, namely the Middle East and Latin America, where we’re an international emerging bank – that is where the growth is.”

Growth markets aside, de Vicenentiis was quick to note that HSBC’s sponsorship choices are made with their customers in mind too.

“The values of both those sports are incredibly important to us because our values of integrity, team work and fair play are mirrored by the value of the actual sports.

“Football for example, although massive in Asia and Latin America and our customers like it, doesn’t have the same value set. As a business we would have to spend a lot more money to sponsor the Premier League and actually there would be a lot of wastage because it is a mass sponsorship. That’s why we go a bit more targeted.”

More ‘targeted’ also reduces the risk that comes as part of a sponsorship deal. HSBC tends to sponsor events and tournaments rather than individuals and teams – the exception being the British and Irish Lions, who tour Australia this summer.

“Our view is that it is much safer and actually better to sponsor a tournament or an event because there is less risk associated to it. You do not rely on the performance, you rely on the quality of the event; it doesn’t matter who does well it’s just the actual sport.”