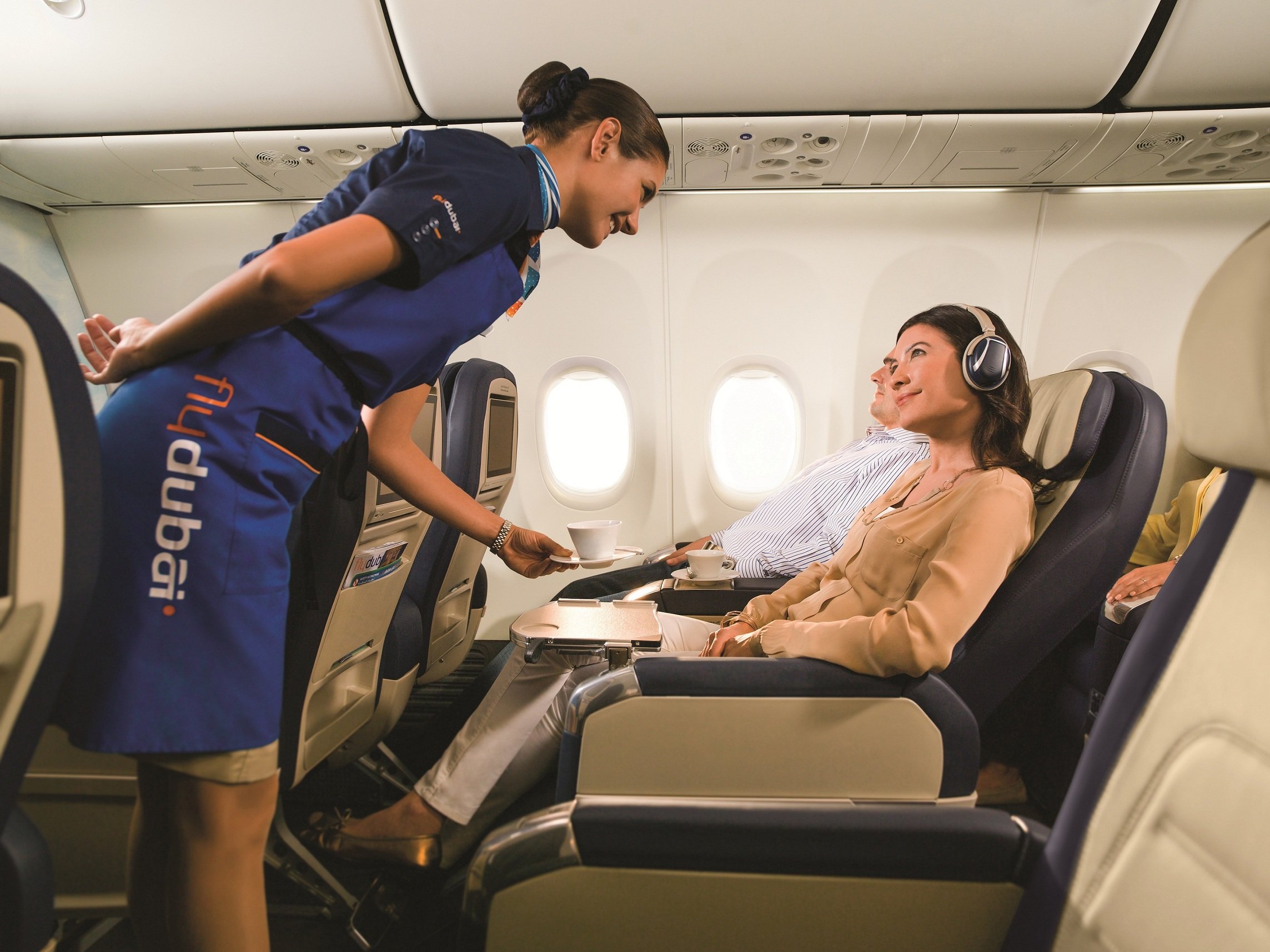 Middle East premium airlines are investing hundreds of millions of dollars on luxury services as they bet on rising demand for business class, while even low-cost carriers are cashing in on their wealthier passengers.

Although it’s been a tough few years for the aviation industry, the Middle East is leading a global revival for the sector, especially in business and first-class traffic.

With improvements in business, investor and customer confidence, and expected increases in oil production and non-oil sector projects, business travel is expected to pick up momentum in the Middle East.

In comparison to a global average RPK increase of 5.5 per cent year-on-year, the strong growth trend is likely to continue, with European airline manufacturer Airbus predicting that Middle East airlines will buy 1,000 of its aircraft, worth $124 billion, over the next ten years.

Much of this growth will come from affluent travellers in business class. Premium airlines are known to earn about 40 per cent of passenger revenue from the high-margin segment. With yields per premium passenger typically around four to five times higher than those for economy class.

Given this, aviation bosses are keen to keep their high flyers sweet and are pouring money on amenities that range from in-flight fine dining to chauffeur service at airports.

Emirates Airline, Etihad Airways and Qatar Airways are investing heavily to attract travellers with fleet upgrades, extensive networks and new perks. Qatar Airways’ Richard Oliver, UK and Ireland Country Manager, says: “Customers are seeking higher and higher quality and airlines have to respond to this constantly. We are carrying premium customers who want an extensive route network, excellent connectivity, warm hospitality and service in lounges and in the air, and world-class cuisine.

“Our five-star service is attracting more and more passengers around the world from more destinations than ever before.”

Qatar Airways is known for its luxurious lounges at airports around the world including full shower facilities, as seen at London Heathrow Terminal 4. It added
a premium terminal in Doha enabling faster check-in and exclusive duty-free shopping, although it has of course been held back by long overdue Hamad International Airport.

Business class passengers are offered in-flight menu options from some of the world’s finest chefs, for instance from Japanese restaurant Nobu, plus the airline’s flagship ticket office can be found in Harrods in London.

But perhaps most significant is its recent decision to join the Oneworld Alliance – the first of the ‘big three’ Gulf carriers to do so – which enables passengers to access more destinations around the world while earning points. Qatar Airways joins twelve other carriers and integrates their 130 destinations into the nearly 1000 served by Oneworld members across the world.

“In order to stand out from the crowd, airline companies are increasingly focussing on providing wider coverage of destinations and better in-flight facilities for its passengers,” says Bharath M, Frost & Sullivan’s research analyst for business and financial services covering the Middle East, North Africa and South Asia.

“Etihad, for instance, has been pursuing a strategy of inorganic growth through acquisitions, in order to compete with its larger rival, Emirates. Code- sharing agreements and airline alliances are becoming the norm as airline carriers try to decrease costs, reduce excess capacity and increase their presence in a wider geography.”

Earlier this year, Dubai’s Emirates Airline hinted that it is working on a two-class configuration variant for its Airbus A380 that will enable it to add seats to the aircraft. The concept would do away with the carrier’s current A380 version offering 517 seats in a three-class layout. The new variant, which could enter service in 2016, would eliminate first class, although the upper deck bar would remain.

And the airline has previously announced that a more economical two- class Boeing 777 configuration is on the table again. When contacted, an Emirates spokesperson declined to comment further.

Europe’s largest airline Lufthansa has also decided to reposition its premium offering. The carrier decided to remove first-class cabins from one-third of its long-haul aircraft, with the remaining 70 planes receiving an upgrade that includes more comfortable seats fitted with thicker mattresses and a more elaborate culinary offering.

Lufthansa is in the middle of a dramatic revamp that includes major job cuts, at the same time as investing in modern jets to cut its fuel bill and catch up with deep- pocketed Gulf rivals, particularly on hotly contested routes to Asia.

So what will be business travellers’ service demands going into 2014?

Carsten Schaeffer, Lufthansa vice president sales and service southeast Europe, Middle East and Africa, says: “Customers are demanding a fast and seamless travel experience to reach their flight. Therefore we have focused to speed up the check-in and transfer facilities at our hubs in Frankfurt and Munich, which are in the top five of Europe’s most punctual and reliable airports.”

He particularly emphasised the airline’s family-friendly amenities. “We have invested in broadband WLAN onboard, giving customers the chance to surf the web in real time and use their time onboard more efficiently – giving them more rest time with the family before or after the flight.”

“Meanwhile, Lufthansa is once again bolstering its services for the entire family with unique ‘Family Check-in Areas’ at Frankfurt and Munich Airports, enhanced onboard children’s meals, snacks and games, as well as mementos that even the youngest travellers will treasure.”

Using innovative technology to tailor service will give an airline a strategic advantage, says Paolo De Renzis, British Airways regional commercial manager for the Middle East and Central Asia. “We provided specially equipped iPads to 2,000 senior cabin crew across the entire British Airways long and short haul fleet. This enables the crew to have access
to passenger information with a swipe of their fingertips, providing real-time insight into our customers’ preferences across a whole range of areas, from special meal requests to onward travel plans, enabling us to deliver a truly bespoke service.”

He says BA is trialling electronic (permanent) bag tags – to replace the sticky, paper airline bag tags with re-useable digital ones, which are updated on each customer’s baggage with new details every time they fly. Other technologies in the testing phase include auto check in, auto gates, self- baggage drop, and biometrics.

“Evidence suggests that Middle East customers often opt for modern technology over tradition when it comes to their travel plans. They are already frequent users of modern features made possible through technology, such as online check-in, mobile boarding passes, self check-in and airline mobile apps, indicating that they are well-prepared to receive the new wave of personalised technology that will be heading their way.”

Part of the BA’s website allows passengers to check-in, while another lets them plug in their departure and arrival details to determine exactly what movies they will be able to watch on back-seat screens.

Airlines around the world are spending additional money on these sorts of technological offerings to attract tech- savvy passengers.

Some carriers have rolled out air- to-ground in-flight Wi-Fi and even though connectivity woes continue to frustrate many consumers, there is now also satellite-based internet service on some planes.

In September, Hawaiian Airlines said it was the only carrier based in the US to offer Apple’s iPad mini on all of its wide-body Boeing 767-300 aircraft as a replacement device for portable entertainment systems.

Meanwhile, apart from high-tech gadgetry, Etihad Airways has been investing in so-called ‘prognostics technology’ – and in particular the most advanced warning system on the planet. In June, the UAE flag carrier announced a partnership with a company named Taleris to launch a new technology capable of predicting potential maintenance faults along with recommendations for fixes.

In the Middle East, as travellers in general grow increasingly affluent, the demand for exceptional travel experiences is stronger than ever. This has prompted budget carrier flydubai to launch into business class travel, joining a global trend in low-cost airlines hybridising their fleet and services. The new service, which went live in October, is available on select routes like Istanbul, Juba, Kabul, Kiev and Malé.

Globally, US budget carrier jetBlue recently announced that it would offer business class on selected trans- continental routes next year.

FlyDubai CEO Ghaith Al Ghaith told Gulf Business: “We have already differentiated ourselves through our existing product offering and the launch of business class is an evolution of our business model, providing a greater choice for our passengers.”

“We have opened up 46 previously underserved routes across our network and on some of these routes we will be the only airline offering business class.” In the past two years, flydubai has more than doubled the number of destinations it flies to and has around 1,200 weekly flights. It carried 5.1 million passengers in 2012 and has become the second largest carrier, by passenger numbers, operating out of Dubai International.

Al Ghaith says his airline is “challenging the conventions around air travel”.

  As the battle for business class heats up in the coming year, it’s a mission statement that most aviation CEOs around the world will be hoping their business can take on board.