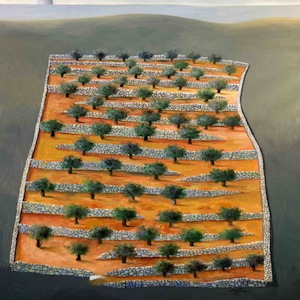 Dubai’s Meem Gallery has been the setting for an exhibition by three artists for whom injustice, displacement and occupation are pivotal motivations for their work. The Art Palestine exhibition, which opened on 5 October and runs until 5 November, showcases the talents of Nabil Anani, Tayseer Barakat and Sliman Mansour.

With the Arab Spring protests on the streets of so many cities across the MENA region over the past six months, the exhibition of such politically motivated and inspired artists, who all live in the Occupied Territories, is particularly well timed.

Sliman Mansour is considered by critics of Palestinian art to be an artist who expresses the concept of ‘sumud’ – which is the Arabic word for a ‘steadfast perseverance’ in the face of the Israeli occupation of Palestinian land. In 1988, he produced four paintings of Palestinian villages that had been destroyed.

Meanwhile, Tayseer Barakat has been quoted as saying that the uprisings on Arab streets have given new vigour to his desire to return home.

If their artistic background appears similar, then the central theme of these artists’ work is even more closely aligned, as Zaki explained. “Nabil Anani’s work is a myriad of Palestinian symbols, linking the land, the house and the people. His recent works focus on the olive tree as a symbol of national identity that the occupation is trying to obliterate.

“Mansour’s work focuses on the land and its symbols; he portrays the relationship between the people and their land, showing conflicting experiences of people on their occupied land. His most recent works emphasise the great olive tree as the symbol of the land of Palestine.

“Tayseer Barakat’s work captures a mystical atmosphere based on the old history of Palestine that developed from ancient regional cultures. He conceives history as a mosaic of images, a liberating force of a scattered soul.”

Mansour’s use of charcoal and oil on canvas or linen generates a tangible sense of shade and subdued colours in his work. His ‘Watch Tower’ displays a darkened hillside of olive trees, which is partially obscured by a sombre military outpost.

Anani, also an accomplished sculptor and ceramicist, utilises acrylic on canvas to produce occasionally bold colours within an often dark and menacing backdrop – his ‘The Olive Intifada’ being a good case in point.

Barakat’s use of mixed media and acrylic on canvas allows him to create a highly individual and striking mosaic tiled effect. Distorted human and animal representations as well as a form of lettering or calligraphy punctuate his work.

Intriguingly Anani, quoted in the impressive catalogue, which accompanies the exhibition, states that he employs a scalping knife to evoke “a more tangible sense of violent winds or feelings of anguish and rage.” Mansour uses mixed elements to indicate “the beginning and the end”, thus combining charcoal and brush drawings.

Both Anani and Barakat depict human forms in a silhouetted, even unworldly manner. “The human elements in Tayseer’s work are inspired by regional mythology and the ancient history of Eastern cultures. He tries to depict the philosophical nature of our culture and not only what is directly seen. He attempts to deeply understand our roots and therefore the human figures on his canvas are rather abstract, like in a dream.

“In Nabil’s work the focus is on the occupation, the people in revolt, where all endure the same oppression, the same history, the same destiny. The human forms are silhouettes that reflect the common revolt against injustice. Hence human details become insignificant,” commented Zaki.

The paintings in this exhibition are for sale with prices ranging between $7,000 and $14,000. “There has been strong interest, especially since the three artists come from Jerusalem and Ramallah. Art collectors, particularly those from the Palestinian community were very interested,” observed Zaki.