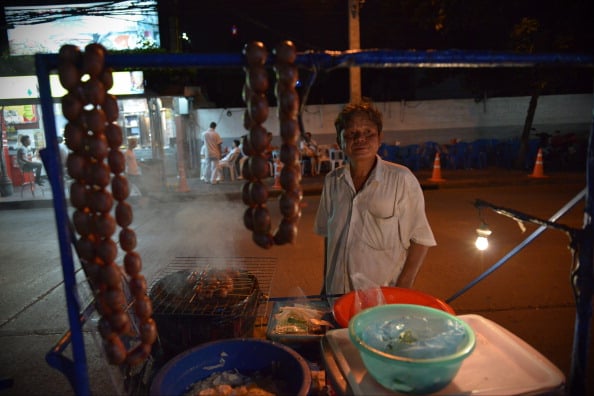 Hoping to show things are getting back to normal, the military has also relaxed a night-time curfew brought in after it seized power in a May 22 coup, and is expected to speed up efforts to get the economy moving again after months of debilitating political protests.

Data on Wednesday showed factory output fell 3.9 per cent in April from a year earlier, the 13th monthly drop in a row.

The Commerce Ministry reported another slump in imports, down 14.5 per cent in April from a year before as companies, unsure how the politics would develop, stopped importing machinery and consumers reined in spending.

Exports have not been able to offset the depression in the domestic economy: they fell 0.9 per cent in April, although the ministry said it was still hopeful for five per cent export growth this year.

The two men are towering figures in Thailand’s military establishment and have close ties to coup leader General Prayuth Chan-ocha. All three are staunch monarchists and helped oust Thaksin, who remains at the heart of the political crisis, in a 2006 coup.

A Reuters report in December revealed that Prawit and Anupong had secretly backed the anti-government protests that undermined the government of Thaksin’s sister, Yingluck Shinawatra. She was removed by a court on May 7 for abuse of power and the coup ousted remaining ministers two weeks later.

Also among the advisers is Pridiyathorn Devakula, overseeing the economy. A former central banker, he was finance minister in an interim government after the 2006 coup, when strict capital controls were introduced to hold down the baht, causing the stock market to plunge 15 per cent in one day.

Thailand’s gross domestic product shrank 2.1 per cent in the first quarter of 2014 as the anti-government protests frequently shut down ministries, damaged confidence and scared off tourists.

The military has moved quickly to tackle economic problems, notably preparing payments for hundreds of thousands of rice farmers that the ousted government was unable to make.

But General Prayuth has not set any timetable for elections, saying broad reforms were needed first.

That may further complicate relations with foreign governments that have called for a speedy return to democracy, an end to censorship and the release of politicians, protest leaders, journalists and others detained.

“We’re going to have to continue to calibrate how we’ll work with the government and military when they don’t show any pathway back to civilian rule,” a senior U.S. official told Reuters in Washington. “We’re very concerned and there will be an impact on our relationship.”

Scores of politicians and activists have been detained as the military moves to stifle resistance to its takeover.

There have been daily, peaceful protests against the coup in Bangkok with crowds calling for elections and confronting troops, although the number of protesters had dwindled to about 200 on Tuesday from about 1,000 on Sunday.

A seven-hour curfew the army imposed after the coup from 10 p.m each night will from Wednesday be shortened to four hours, starting from midnight.

Thaksin has not commented on the coup except to say he was saddened and hoped the military would treat everyone fairly. Yingluck has been released from detention but remains under some restrictions, officers and aides say.

Soldiers detained a former education minister, Chaturon Chaisang, on Wednesday after he had emerged from hiding to denounce the coup, saying it would only worsen conflict. He said people in detention were not being treated badly.

The Shinawatras’ strength is in the north and northeast, populous, mostly rural regions that have won them every election since 2001. Some Thaksin loyalists had vowed to resist a coup and the army and police are hunting for weapons.

Many Bangkok voters support the establishment and approve of the coup if it means ending Thaksin’s influence. They say he is corrupt and disrespectful to the monarchy. He denies that.

“This is a good coup,” said Chanchai Thonprasertvej, 54, a doctor at a small pro-coup gathering at Bangkok’s Democracy Monument on Tuesday. “The army can protect the land and the king. It will protect my country from Thaksin.”