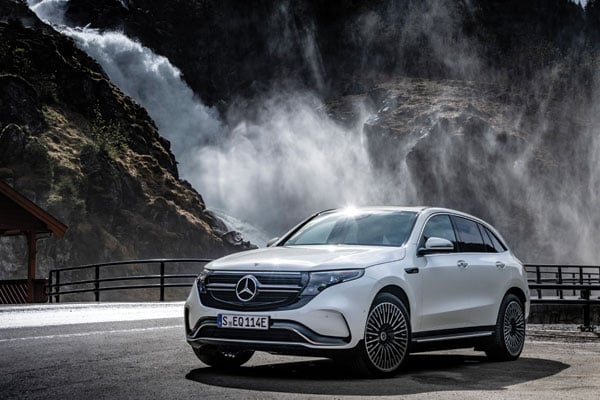 Mercedes-Benz has forged an enviable legacy of building and selling cars powered by combustion engines, but did you know the Stuttgart-based marque had electric vehicles on offer way back in 1906? It’s another story that the three-pointed-star didn’t subsequently pursue the genre at the time as the huge progress made with petrol engines in the early 1900s meant there was no real need for battery-powered cars in its line-up.

Fast-forward to today and the case is, of course, very different. Diminishing fossil-fuel reserves, plus stringent controls on vehicle emissions (especially in Europe and North America) have sparked a big push to get EVs on the market in large volumes. Tesla led the charge, but now the Euro manufacturers have leapt onto the bandwagon – Jaguar, Audi, BMW, Renault, Nissan and Chevrolet are just a few of the manufacturers with electric vehicles in showrooms, albeit not in all markets. 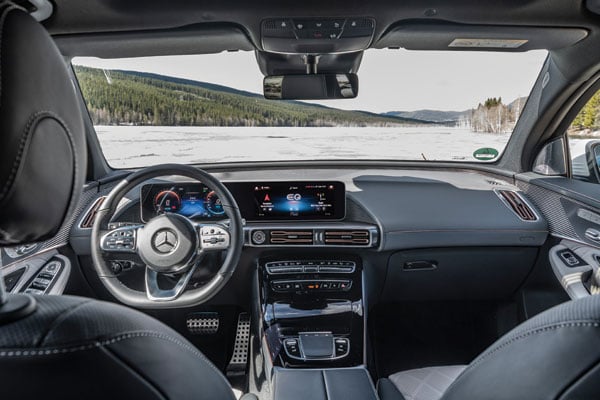 Somewhat surprisingly – given its track record as a pioneer when it comes to debuting new tech – Mercedes has been late to the EV party, as the brand-new EQC crossover is its first mass-market offering in the segment. Slightly tardy it may be, but Merc is now plotting a comprehensive onslaught on the EV sector as the brand’s EQ family (‘EQ’ is Merc’s acronym for ‘Electric Intelligence’) is set to mushroom to 10 models by 2022.

We travelled to Oslo to sample the EQC and there’s a good reason why Mercedes chose the Norwegian capital as the launch venue for its maiden EV. You see, every second car sold in this north European nation last year was either a full-electric vehicle or plug-in hybrid. The EQC is totally in its element here as the local roads are infested with a horde of Teslas, while Jaguar i-Paces and Audi e-trons are hardly a rarity either.

Mercedes didn’t need to start from scratch in developing the EQC, as it shares its basic structure with the existing GLC crossover. However, the platform needed to be significantly reworked to accommodate the 642kg battery, which sits under the passenger cell of the vehicle. That’s the safest place for it, as it’s protected on all sides by a structure that can keep the volatile 80kWh battery pack intact in even the severest of collisions. The other advantage in having the battery down here is that it keeps the car’s centre of gravity as low as possible, which optimises both handling and stability.

Propulsion for the EQC comes from a pair of electric motors – one each for front and rear axles – so the vehicle is a legitimate all-wheel-drive crossover. That said, it’s normally only the motor at the front that does the driving, with the rear unit kicking in only under heavy throttle loads or when traction levels are exceeded at the front.

Despite the EQC’s powertrain being in complete contrast to the rest of Merc’s vehicle range, you’d be hard-pressed to glean this from behind the wheel. Indeed, after covering the first 40-50km of our drive route, my overriding impression is of how ‘normal’ the EQC 400 looks and feels. Apart from the lack of engine noise (there’s only a muted remote-control-car whine from the electric motors), there’s no clue that its ions rather than unleaded fuel doing all the work. 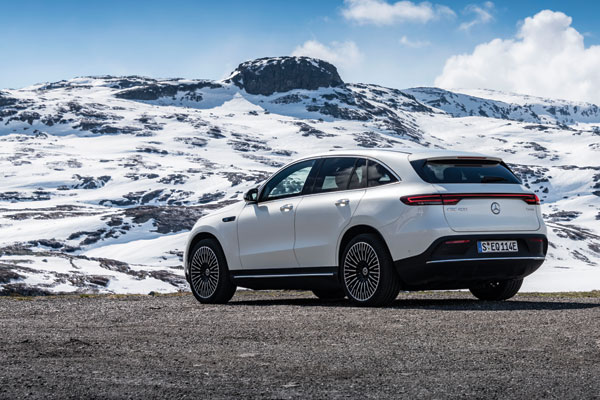 The rest of the driver interface is remarkably conventional, too. As in other Mercs, there’s a column-shift auto with ‘P’, ‘R’ and ‘D’ settings, and the accelerator and brake pedal are no different to the norm. There are various drive modes you can select from, and we initially choose the default ‘Comfort’ mode, but there’s also ‘Sport’, ‘Eco’, ‘Individual’ and ‘Maximum Range’ settings, depending on your mood and the situation.

As the name suggests, ‘Eco’ boosts range by recuperating as much energy as possible by converting kinetic energy into battery charge the instant you lift off the throttle. This essentially enables what Mercedes refers to as ‘one-pedal’ driving as you barely need to touch the brake pedal due to the instant deceleration that occurs when you lift off the accelerator. Conversely, ‘Sport’ unleashes the full brutality of those twin electric motors, which serve up a combined torque quota of 760Nm – almost the same as the steroidal AMG E63 S twin-turbo V8. Flatten the throttle in this mode and you’ll find your torso literally gets imprinted into the seatback.

It might weigh a hefty 2.5 tonnes, but the EQC accelerates with virtually the same urgency as a supercar. It’s also surprisingly lithe and agile for something this heavy, not to mention supremely quiet and refined. Mercedes quotes a 0-100kph split of 5.1seconds, which is extremely brisk for a five-seat, all-purpose family wagon. The EQC’s rear seats are acceptably spacious, and its 500-litre luggage compartment is spacious, though not class-leading.

Mercedes quotes a touring range of 355km but, if you’re flooring it all over town, expect to travel half that distance between recharges (it takes 40 minutes at a fast-charge station to zap the battery level from 10 per cent to 80 per cent, or overnight if you’re relying on a home wallbox).

There’s no denying Mercedes is a belated entrant in the EV segment, and one could argue the EQC’s styling errs towards conservatism but, these gripes aside, the newcomer is a highly convincing first crack at the genre – it’s fast, refined and highly practical as a daily driver. In fact, there’s a good chance it will persuade even devout petrolheads to switch camps to the battery brigade.

The EQC – The Mercedes-Benz of electric cars

The Mercedes-Benz EQC brings innovation to the forefront