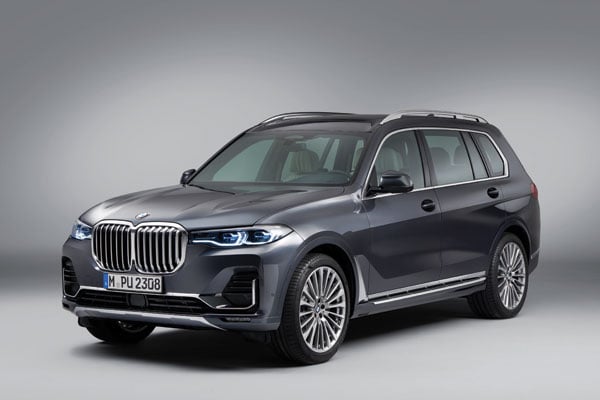 BMW barged into the all-terrain go-anywhere market way back in 1999 with its X5, and the Bavarian brand’s SUV onslaught thereafter went into overdrive, with the ‘X’ family subsequently being bolstered by the X1, X2, X3, X4 and X6. However, it’s taken the company two decades since the X5’s debut to come up with a full-size, seven-seat contender.

Better late than never, as the old cliché goes, as the brand-new X7 packs in all the familiar BMW ingredients into a package that offers a premium feel and vast levels of interior space. The flagship SUV has the challenge of representing the blue-and-white roundel in a segment that already includes the likes of the recently updated Mercedes-Benz GLS, Audi Q7, Lexus LX570, Infiniti QX80, Cadillac Escalade and Lincoln Navigator.

Although the X7 comes with a price tag that positions it well above most of these rivals, BMW is arguably the most sophisticated offering in the category as it’s loaded with a barrage of safety systems and underpinned by a cutting-edge platform – dubbed CLAR, shorthand for ‘Cluster Architecture’.

It may not be as vast as the Navigator and Escalade, but the X7 is still a sizeable vehicle, measuring 5,151mm long and 2,000mm wide. These generous dimensions mean it’s a genuine seven-seater, rather than a wagon that accommodates only small children in the third-row seats.

Propulsion for the X7 comes from either a 3-litre turbocharged six-cylinder unit or a 4.4-litre twin-turbo V8, which in the xDrive50i pushes out robust outputs of 462hp and 650Nm. 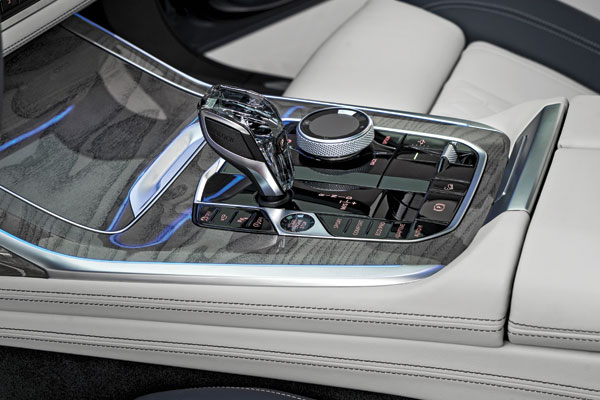 However, for our maiden road trip across Poland and the Czech Republic, we hopped into the entry-level xDrive40i, which is likely to be the volume seller in the Middle East. This variant is no slouch, as its 3-litre inline turbo six ekes out 340hp at 5,500rpm and a beefy 450Nm, on tap from 1,500rpm to 5,200rpm.

The twin-turbo V8 xDrive50i is the more rapid of the two, but even the 40i is brisk enough, as reflected by a claimed 0-100kph split of 6.1seconds. All powertrains are hooked up to the excellent ZF eight-speed auto, which has virtually become the default transmission for European premium brands.

Although the X7 shares its basic platform and drivetrains with the smaller X5, the former comes standard with adaptive dampers and air suspension on the front and rear axles, benefiting both ride qua-lity and handling. It’s remarkably agile for something this big, and this is even more so if you tick the option boxes for active sway bars and four-wheel steering.

The cabin layout won’t be unfamiliar to anyone who’s sampled the latest X5, and there’s again an emphasis on clean, uncluttered design, with buttons and switchgear kept to a minimum as most functions are controlled via the familiar iDrive rotary knob. It’s occasionally an irritation to have to scroll through various menus to get what you want, but in its latest Version 7.0 guise, the iDrive system is far more intuitive than earlier versions. The X7’s tech arsenal includes a raft of collision-prevention systems and optional semi-autonomous driving assists. There are even optional laser headlights that illuminate the road for 500m ahead.

The X7 is about 230mm longer and 60mm taller than the X5, so it’s no surprise it feels comparatively cavernous inside, especially with its full-length panoramic glass roof, which creates a great sense of airiness in the cabin. Less impressive is the fact you can stow only 326 litres of luggage if all three rows of seats are in use. 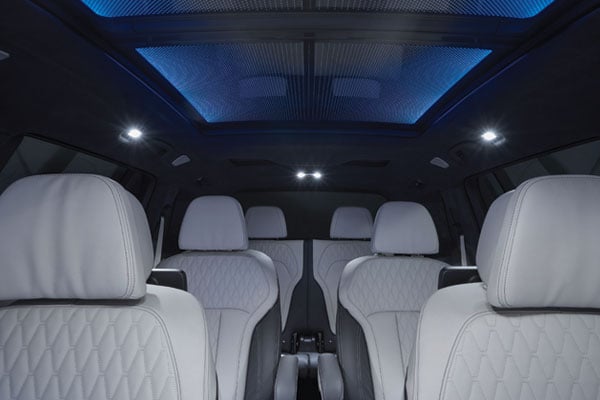 However, folding down the third row of seats ramps stowage space up to 2,120 litres, so this is what you’d need to do if Ikea trips are on the agenda. There’s the option of specifying a pair of captain’s chairs – as opposed to a three-seat bench – for the middle row, and this format also makes access to the third row much easier.

Our drive in the X7 took us from the Polish city of Wroclaw to the Czech capital of Prague, with the predominantly narrow, winding route including the famed ‘100 Curves Road’ in the Klodzko Valley. This road runs for 23km between Radkow and Kudowa Zdroj, near the Czech border in south-west Poland, and it certainly lives up to its name. What became clear after tackling this stretch is that the X7 might not serve up the agility of a Porsche Cayenne, given that there are more than 2.5 tonnes of it, yet it’s far nimbler and more dynamic than pretty much all its competitors in the seven-seater domain. It’s also strong on refinement, with wind, road and engine noise well suppressed and ride quality that’s decently plush, even across lumpy cobbled roads.

The X7’s self-levelling air suspension offers a full 80mm of ride height adjustability, as it raises 40mm above the standard setting in off-road modes. There’s also a button in the luggage compartment that activates a loa-ding mode whereby the car lowers by 40mm from the normal ride height, making it easier to heave heavy objects into the cargo bay. The two-piece tailgate is electrically activated, with the top section gliding up, while the lower half drops down. One advantage of this set-up is that you can pop open the tailgate even if you have a low garage roof.

The frontal styling of the X7 may not be to everyone’s tastes – thanks to that massive twin-nostril grille – but as an overall package, there’s much to like about the big SUV. It’s potent, comfortable and beautifully built, although all these attributes don’t come cheap. That said, you do get a lot of metal, leather and wood for your money.