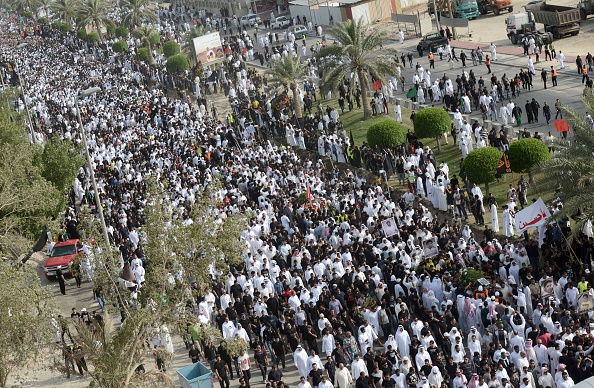 Tens of thousands of people turned out at a mass funeral in eastern Saudi Arabia for 21 Shi’ite Muslims killed last week in a suicide bombing claimed by ISIL, a Reuters witness said.

Saudi security forces stayed away from the funeral in Qatif, as delegates converged on the city from various regions in the eastern province, where most of the country’s Shi’ite Muslim minority live, to attend the burial.

“Here I am, O Hussein,” the crowd chanted, invoking the name of Prophet Mohammad’s grandson Imam Hussein, one of the most revered figures in Shi’ite Islam, as they marched towards the cemetery behind the flower-covered coffins, held shoulder-high by local men.

At the funeral, activists posted a picture of prominent rights activist Mikhlif al-Shammari, a member of a large Sunni Muslim tribe who had been jailed in the past, holding a placard that read: “Sectarian incitement is a time-bomb.”

Friday’s attack was one of the deadliest assaults in recent years in the largest Gulf Arab country, where sectarian tensions have been frayed by nearly two months of Saudi-led air strikes on Shi’ite Houthi rebels in neighbouring Yemen.

Saudi King Salman, in a conciliatory statement on Sunday, said he was heartbroken over the bombing and vowed to bring anyone linked to the attack or who sympathised with it to justice.

Shi’ites, who are a small minority in the predominantly Sunni Muslim Kingdom, complain of discrimination, a charge denied by the government.

Residents of Qatif had hung placards on the funeral path denouncing sectarianism and demanding equality. They also called for closing down some private television stations run by Sunni Muslim hardliners, which Shi’ites see as promoting hatred.