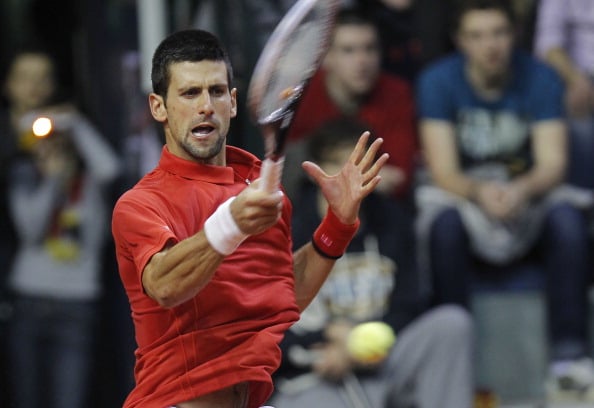 Novak Djokovic trounced fellow Serb Viktor Troicki 6-1 6-4 in the Dubai Championships first round on Tuesday as the world number one extended his unbeaten run to 14 matches.

Djokovic, whose winning streak stretches back to October and includes claiming a third straight Australian Open title, was broken once in the second set but was otherwise untroubled in his first match since Davis Cup duty in early February.

“I had three or four weeks of no tennis, so I was extremely focused to start well and I did really well in the first set,” Djokovic, 25, said in a courtside interview.

“I was right behind his serve and I’m very satisfied with my performance and hopefully I can continue.”

Few would bet against the top seed meeting Roger Federer in Saturday’s final, with the pair having won eight of the past 10 Dubai titles, although the Swiss did need three sets to get past wildcard Malek Jaziri on Monday.

Also into the second round is former U.S. Open champion Juan Martin Del Potro, who saved three match points on his way to beating Marcos Baghdatis 4-6 6-4 7-6.

Fourth seed Del Potro recovered from 4-1 down in the deciding set, the Argentine’s superior ground strokes ultimately wearing down his Cypriot opponent as dusk fell.

“Marcos also deserved to win but the luck was behind me and I played better in the big moments,” Del Potro said in a courtside interview. “In the tiebreak I was solid.”

The opening two sets were decided by a service break as both players opted for a serve-and-volley approach, Del Potro losing the first with a double-fault.

In the deciding set, Del Potro misjudged a Baghdatis lob that drifted in after the 24-year-old pulled his racket away at the last moment to allow the Cypriot to break.

The Argentine had been guilty of making too many unforced errors but was nerveless in saving successive match points, then a third, to hold for 5-5 as some brutal serving helped him survive.

In the tiebreak, Baghdatis wilted by clubbing shots wide and long.
Michael Llodra beat a tiring Jo-Wilfried Tsonga 7-6 6-2, his first victory in seven meetings against his fellow Frenchman.

Tsonga, who won a 10th career singles title on Sunday after defeating Tomas Berdych in the final of the Marseille Open, was 4-2 up in the first set.

But the fifth seed faltered as left-hander Llodra rushed the net at every opportunity, in the final game brilliantly blocking off two attempted passes with angled volley winners.

The first two games took 31 minutes to complete, with Tipsarevic going through three rackets in the opening three games.

The Serb came out fighting in the second set and broke twice for a 4-1 lead only for 31-year-old Davydenko to win six of the last seven games.