How technology is changing the GCC’s logistics industry - Gulf Business 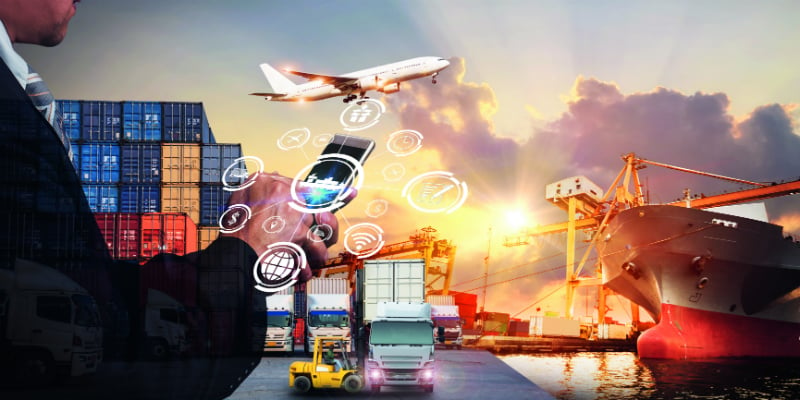 The Gulf region’s logistics industry has enjoyed a high reputation in recent years, and has performed well despite a tougher economic climate of late.

Central to several GCC countries’ future development plans, the region’s logistics market has proven a fundamental pillar of regional economies, and is set to grow at a rate of 7.3 per cent CAGR to a value of $66.3bn by 2020.

In 2015, logistics accounted for 13 per cent of Saudi Arabia’s GDP, and 10 per cent of the UAE’s – figures that will have undoubtedly risen in the interim thanks to both countries’ ambitious diversification and development plans.

And the region’s growing capabilities have given it international recognition.. According to the World Bank’s latest Logistics Performance Index, the UAE ranked 13th out of 160 countries, outdoing the likes of Canada, France, Finland, Denmark and Australia. Against its emerging market peers, the UAE ranks first.

Similarly, a January report by Kuwaiti logistics firm Agility placed the UAE as the third best logistics centre among 50 emerging markets, behind China and India. Bahrain was ranked fifth, with Oman in sixth and Saudi Arabia in seventh position.

But while an external view suggests plain sailing, there are continual challenges, changes and developments that regional logistics firms must contend with and adapt to in order to stay at the front of the pack.

A major contributor to this is technology, which has and is changing the logistics industry at an accelerated rate.

From artificial intelligence (AI) to blockchain, and big data to robotics, logistics players are on a constant mission to understand and implement new and developing technologies in the most effective and efficient ways possible. 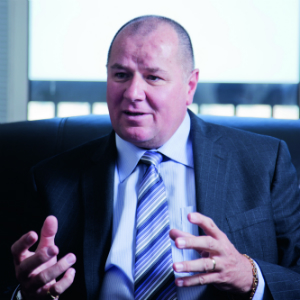 “The logistics space is being significantly influenced by technologies like blockchain, AI, IoT and automation, demanding positive change across functions and across industry verticals,” says Gulftainer’s group CEO Peter Richards.

“The supply chain landscape will be much different than what it is today, and those that are agile enough to quickly align with trends will be the ones to come out strong.”

Richards singles out big data as having “the potential to encourage innovation and improve efficiencies,” as well as IoT, which “can be used to model vessel behaviour to quickly and accurately detect and forecast events”. He also highlights the role of blockchain, which he says has the “potential to streamline key business processes and increase operational efficiency”.

Shailen Shukla, head of Jumbo Logistics at Jumbo Group takes the conversation a step further, stating “the logistics industry is at the forefront of technology adoption to improve efficiency”.

“Technologies such as IoT, machine learning and AI will further improve and simplify the processes in the supply chain and logistics industries,” he says.

“Innovative software solutions as a method of increasing efficiency and accuracy are also important for the industry.”

To illustrate the practical implications of these technologies, Gaurav Biswas, the founder and CEO of TruKKer Technologies – billed as an Uber for lorries in the UAE – offers some examples of how they are making a difference.

“There are now AI-powered sensors capturing long tail metrics such as fleet physical health and driver behaviour, which are being used for predictive prevention of accidents,” he says.

“There are also prototypes of blockchain technology being used for interconnected fleets, communicating in transit for optimisation of road real estate. 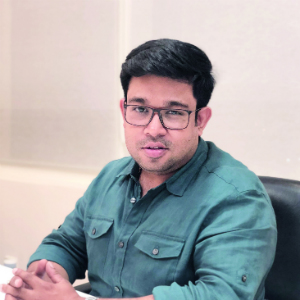 “Blockchain has the power to transform almost every element of this industry. Connected fleets powered by the internet of everything is already an industry buzz-term. Such a fleet needs a higher level of security and blockchain is a matchless solution in this regard.

“Drone deliveries are also becoming a reality and they are becoming more accurate and efficient. Smart technology is making every touchpoint of the logistics process ‘smarter’, and telematics systems have improved tracking and traceability, making transport reliable and secure.”

While Sebastian Stefan, co-founder and CEO of Load-ME, agrees, he suggests that these new technologies are a long-play for businesses.

“I can see AI and new technologies making their space in the logistics industry, but the big impact will be later,” he says.

“Now we are in the adoption stage – a very fast adoption, I would say. On demand logistics and transport marketplaces are now automated, connected with IoT, and generating big data. Soon we can expect to see anticipatory logistics.”

In being an early adopter of efficiency-improving technologies, the logistics industry is also considered one of the most likely to see job losses, as technology replaces traditional job roles.

This follows a trend not confined to logistics or the region, with a 2017 PwC report suggesting that automation will replace 33 per cent of jobs in the US by 2030, and 47 per cent by 2033. Around 137 million workers in Southeast Asia could lose their jobs to automation within the same period.

At this year’s World Government Summit, McKinsey and Company estimated that nearly half of the Middle East’s existing jobs could be automated within 12 years. That equates to nearly 21 million full-time employees.

“In some cases humans will not be needed,” confirms Stefan.

“Self-driving trucks will reduce the need for drivers, for example. This is something real that is happening now – Dubai Metro has 80 trains but no drivers.

“That said, I also believe that at the same time new jobs are created and people should develop new skills if disruption will affect their profession.”

The notion that new roles will be created is one that is echoed by Stefan’s peers, some of who add that new technologies have the potential to augment existing jobs, and even create fresh opportunities.

“Even where robots are used, human intervention is necessary for the supervision and proper functioning,” says Alain Kaddoum, general manager at Swisslog Middle East. 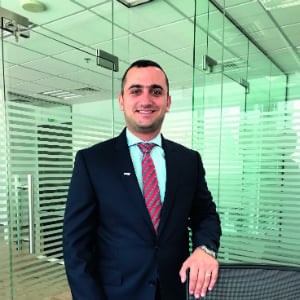 “There is no question of doing away with humans. We only see automation as a tool that helps them do their job more efficiently and with lesser personal risk.”

Adding his support to the motion, Biswas says: “Technology enables incredible things but technology can’t run business by itself. It takes experienced workers to operate all the new technology, and the most successful supply chain operators will be those that can identify and deploy them both in the right balance.”

Gulftainer’s Richards adds: “Companies are often too concerned with potential job losses from the rise of AI, and should instead be looking at how to augment roles to keep up with the data revolution.

“Innovation and the use of tools to make life easier have been markers of progress throughout history, through agricultural and industrial revolutions. We are now in a data revolution and as we progress some of the roles people do will change.”

Indeed, regardless of the technological advances, industry leaders appear to agree on the continual need for the ‘human touch’.

“While AI and other technologies complement businesses, the human workforce is still an important and integral part of the supply chain – particularly when overseeing warehouse operations and the delivery of products,” argues Jumbo’s Shukla.

Richards adds that customer relationships must stay in the hands of human beings, while Kaddoum highlights that there are also disadvantages to the use of AI.

“They can certainly handle their prescribed tasks, but they typically cannot handle unexpected situations,” he says.

“And there are always humans needed to supervise the robots and to maintain them. In such situations, there is no denying that the ‘human touch’ matters and is critical to the workplace.”

The combination of human and robotic capabilities within the region’s logistics firms will be put to the test in the GCC in the coming months and years, as the industry adapts to what could become a boom period brought on by Expo 2020 Dubai, the opening up of Saudi Arabia, and the growth of e-commerce.

The highly anticipated World Expo launches on October 20, 2020, and will include numerous logistics requirements and opportunities before and during the event, as well as after the spectacle closes in April 2021. Meanwhile, Saudi Arabia’s Vision 2030 – designed to diversify its economy away from oil dependency – has laid out ambitions to become the premier logistics hub for the region, and the e-commerce boom continues to gather pace throughout the GCC region. 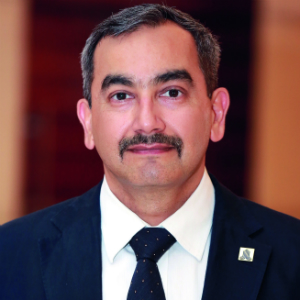 “E-commerce is a growing segment of the consumer electronics industry and has witnessed rapid growth in the last 12 months in the region,” says Shukla.

“This has provided an entirely new market for the logistics industry as more companies will outsource delivery and supply chain solutions to ensure customers have a seamless retail experience when purchasing goods online.

“Expo 2020 will also provide tremendous stimulus to the market – especially local players competing in the global market. New projects will lead to increased demand not just in the short term but also in the long run as the market matures.”

TruKKer’s Biswas adds: “Mega events like Expo 2020 impact cities and definitely have a catalytic effect on the economy. Logistics and transport are the threads woven into the fabric of each and every industry – retail, construction, manufacturing and trade to name a few. Add to this an increase in shipping demand. DP World expects the number of items it handles to double by 2020.

“The increase of accessibility to Saudi Arabia is a push in the direction of a seamless interconnected regional logistics network across the region. As a ripple effect, there will be higher regional trade growth, which I foresee leading to a mushrooming of export-oriented industrial hubs. These will in turn grow domestic demand for logistics and related services.”

Saudi’s potential is also highlighted by Load-ME’s Stefan, who points to the kingdom’s geographical advantage. 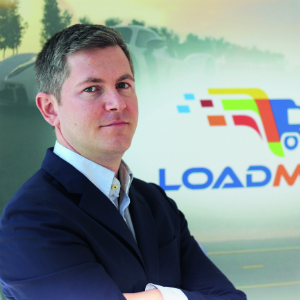 “Saudi Arabia is well positioned on the world’s busiest maritime route, and logistics is a key element in the infrastructure that will sustain the Vision 2030,” he says.

“The kingdom is also the biggest market in the region, so the logistics industry will be sustainable, but there is still room for growth. Further opportunities might come if a highway connects Oman’s ports to Saudi Arabia.

“There are also advantages in the demographics of this country. The young population will be able to sustain organic growth of its logistics industry.”

It all adds up to an exciting picture, with high potential for rapid growth and early adoption of new technologies. With leading players exploring the optimal use of these technologies, and regional governments determined to diversify and develop at high speed, the stage is set for the Gulf to enhance its reputation as a leading global logistics hub.