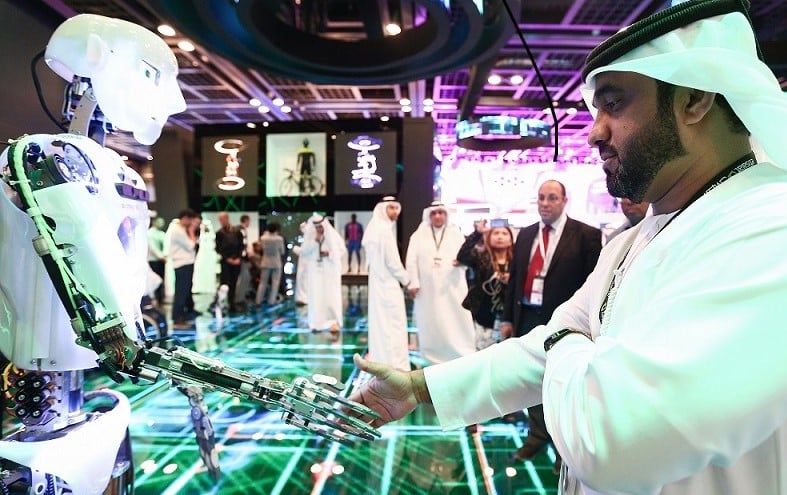 The tech exhibition, which draws participants from across the world, has become a platform for the emirate to showcase the progress of its ambitious ‘smart city’ strategy with government entities among the key exhibitors. The Smart Dubai strategic plan aims to transform all government services and make them digital and paperless. It includes 100 initiatives under six key pillars: transport, communications, infrastructure, electricity, economic services and urban planning.

Overall, a total of 88 Dubai government services are now being provided through the DubaiNow digital application. Dubai citizens and residents have been able to transact over Dhs4bn on the application so far, it was revealed late last month. With the services that are now being offered digitally, an estimated 28 hours per user is being saved, while the need for 14 visits to government services centres has been eliminated.

“We aim to be the one stop shop for all government services,” says Wesam Lootah, CEO of Smart Dubai. “We are launching services that are related to residency – so you can sponsor your family, apply for the entry permit and get the residency all digitally. Also, we are setting up services with (education regulator) KHDA, where you can have access to your children’s academic history and also sign the school contracts. We are also looking at the real estate sector where through the app, you can find the appropriate house for yourself and complete the entire transaction of renting a house digitally with your landlord,” he explains.

“Our aim is to provide all government services digitally versus physically. Given a choice, the vast majority of people would prefer to do a transaction anywhere and anytime digitally. Also, the government saves significant resources when it offers the services in a digital way. So, we hope to leverage these technologies to raise the efficiency of the government and to save time and money for citizens. And we are targeting the year 2021 to completely digitise the entire Dubai government,” he adds.

The Dubai paperless strategy, launched by Crown Prince Sheikh Hamdan bin Mohammed Al Maktoum in February 2018 to digitise all internal and external government to consumer transactions, now has 15 entities onboard.

After 2021, government entities will no longer issue or request paper documents from customers for any transaction, while government employ- ees will also stop issuing or processing paper in key or supporting internal operations. According to officials, the move will eliminate the use of over one billion pieces of paper per year, saving 130,000 trees. The city will save Dhs900m that would have been spent executing paper transactions while Dubai’s residents and visitors will also save 40 hours per year.

SMART CITY SILOS
While the discussions around smart cities have been doing the rounds worldwide for at least 15-20 years now, not a lot of the use cases have been realised. “The reason for that is primarily because when you look at a city, there are so many different silos within that and so you really need to take a horizontal approach, and not a vertical approach,” explains Osama Al Zoubi, chief technology officer, Digitization and Innovation at Cisco MEA.

But a lot of progress has been made, he stresses. There are platforms available now that allow cities to connect various aspects – from traffic, weather conditions and lighting to safety, security and waste management.

The advent of artificial intelligence (AI) and internet of things (IoT) has certainly helped accelerate the deployment of smart city technologies, adds Necip Ozyucel, Cloud and Enterprise business group lead at Microsoft Gulf. IoT sensors installed across the city are able to collect data from different sources, and the application of AI tools such as machine learning process the big data and offer key insights.

Regionally, there is also a lot of thought that is going into creating smart cities, with the developers of projects such as the Expo 2020 site in Dubai and the NEOM site in Saudi Arabia “actually having a more sophisticated level of thinking in terms of the kind of services that are offered to the residents or to the investors”, states Adrian Pickering, regional general manager, MENA at Red Hat.

“For instance, instead of just providing an internet connection and a certain speed, the people who created these entities are asking about the specific requirements that residents want,” he elaborates.

SECURITY CONCERNS
But with a greater number of cities embarking on digital transformation, concerns around security have been mounting.

“We believe security is the biggest challenge from a technology standpoint. Just as every good person is trying to take advantage of the technology, every bad person is also doing the same. And now, because of speed, reach, connectivity and compute power, they’re able to do a lot more with a lot less effort. So from a Cisco perspective, we believe that every point that’s connected not only needs to be secured, but it must also participate in security,” says Al Zoubi.

According to Microsoft’s Ozyucel, technology is also helping stem the issue. “For example, on our cloud, we have a good amount of intelligence coming from our users and enterprises. And we have a centre that analyses the data to detect whether a future attack may be possible. So we are trying to understand, capture, and then predict, so that we can avoid an attack. I think other industry players are also trying to benefit from the cloud to handle these kinds of attacks in advance,” he explains.

Smart Dubai’s Lootah agrees that cyber security is paramount to ensuring a safe and protected experience for citizens and residents. “We take this very seriously,” he says.

Another challenge, he cites, is making sure that the infrastructure and IT systems operate smoothly on a consistent basis. “In digital channels – unlike a traditional physical government office, it’s not a 9 to 5 job; it has to work 24/7. So we have a team that has proven time and time again that we are able to provide critical national infrastructure and achieve our service level agreements and desired uptimes,” he stresses.

RAPID PROGRESSION
Digital transformation has already become far from optional for cities that wish to progress. While there has been apprehension about the neg- ative impact of AI on society and jobs, it is vital to understand the positives they bring to the table, opine industry insiders.

“I think what automation and robotics bring today to the environment is that they take away a lot of the mundane work. And this allows us as humans to be more creative and then move into other areas. We have only scratched the surface of what’s capable and what’s possible today, so you can only think of what else will happen from here onwards,” says Ashish Panjabi, COO of Jacky’s Business Solutions.

Coming back to the new smart floating police station that Dubai unveiled at Gitex, the project, which will be based at the World Island, is a good illustration to understand that may be coming. Expected to open in Q1 2020, the floating seahorse police station will not require any human intervention, and along with providing safety and security services, it will also promote sustainability and marine life protection.

Speaking at the launch, major general Abdullah Khalifa Al Marri, commander-in-chief of Dubai Police, said the project has “grabbed the attention of police and security institutions around the world, as they seek to replicate the experience in their countries”.

The future certainly appears closer then ever in Dubai.