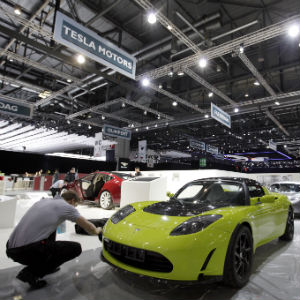 TAQA, which is 75 per cent owned by the government of Abu Dhabi, did not disclose how much it received for the shares.

“We sold all 7,297,139 shares that we held after these were transferred to us from Abu Dhabi Water and Electricity Authority in December 2010. This represents roughly seven per cent of all Tesla Motor shares,” said TAQA spokesman Allan Virtanen.

Leading global automakers Daimler AG and Toyota Motor Co are investors in Tesla, which is yet to report a quarterly profit. Abu Dhabi is the top shareholder in Daimler through its sovereign wealth fund Aabar Investments.

Tesla expects to turn profitable in 2013 and sees 2012 annual revenues nearly tripling, spurred by deliveries of its premium electric sedan, the Model S, which begin in July, it said in February.

In a separate statement, TAQA said it bought a 50 per cent interest in a Kurdistan power plant, which has been operating since 2009. The power plant has a capacity of 750 megawatts, with an additional 250 megawatts under construction, TAQA said.

The company signed a joint venture agreement with Mass Global Investments Co Ltd for the purchase, it said.

“There is a 15 year take or pay agreement (750 MW) in place with the Ministry of Electricity, Kurdistan Region. The facility receives gas from an underground pipeline connecting the Khor Mor gas field to the plant,” said Virtanen.

Abu Dhabi-listed TAQA, which invests in oil and gas overseas, also runs power plants in Morocco, Saudi Arabia, Ghana, India and the US and plans to start oil and gas operations in North Africa.

TAQA is a major shareholder in the Netherlands’ Bergermeer gas storage facility with capacity of 4.1 billion cubic metres, and is also involved in an offshore gas production project in the Dutch North Sea.