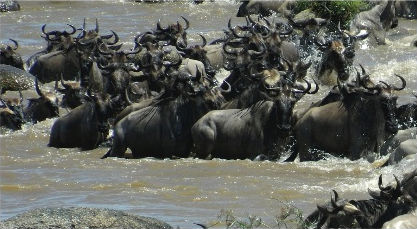 Leonard Kivuyo’s smile is enigmatic. “There is definitely, maybe, possibly a chance to see a lion,” he says.

We look at each other quizzically, wondering about the maybe-yes, maybe-no response of our Tanzanian tour guide. Kivuyo has just picked us up at a gravelly airstrip, a scar in the Serengeti landscape at Kogatende. He wants to know what animals we want to see.

We respond with an all-star list of the Serengeti: black rhino, lion, elephant. And, of course, we want to witness the main attraction of a northern safari this time of year, a wildebeest crossing of the Mara river.

He nods in agreement at our wildlife wish list. There have been regular crossings, just one this morning, Kivuyo tells us. But whether one would happen today, he can’t say. As he unlatches the roof of our jeep so that we have nearly unobstructed views of the grasslands around us, my friend Angel and I exchange bemuse looks at our guide’s Yoda-like responses.

We don’t have to wait for long. Shortly into our journey along a dirt track, we come across a pair of giraffes. About 20 feet high, the male nuzzles the female’s neck as it creeps closer to her. Realising we have stumbled upon the pair mid-romance, we giggle like school children. A few more nuzzles later and the male giraffe has accomplished his mission, walking off towards a tree for a snack.

“Part of the circle of life,” Kivuyo deadpans and we laugh heartily.

We continue our drive and Kivuyo keeps an eye out on the horizon. The hum from the jeep’s walkie-talkie is on low; the guides at the various camps chatter amongst themselves, exchanging information on locations of nocturnal cats, rare rhinos or the anticipatory swarm of wildebeest gathered on the banks of the Mara.

Within an hour, the Serengeti’s abundance of wildlife emerge. We spot impalas and elephants silently grazing, and hippos submerged to their ears in the river to ward off the late afternoon heat. Skittish zebras dart in and out of clusters of their fellow prey animals.

By evening, however, a crossing hasn’t formed and we have to reach camp before sundown. From July to October, about two million animals follow the rains, migrating
from Tanzania’s Serengeti National Park to the Masai Mara National Reserve in Kenya. One of the highlights of the annual migration is the crossing of the Mara river, where crocodiles lurk underwater and lionesses’ prowl on the banks alongside.

At dinner that evening, our fellow campers rave about the raw power they witnessed as thousands of wildebeest stampeded through the Mara river.

A baby zebra walked into the open yaw of a hippo, which then crunched down on it! We watched a wildebeest taken down, mid-river, by a crocodile!

We have no such stories to contribute to the fireside gathering. I am not worried; we still have a few days left for our safari.

The next day, the walkie-talkies are ablaze with chatter of migration-style critical masses forming along the Mara at several crossing points. We travel from site to site, eventually staking out the one nearest to our camp. The hours tick by but by late afternoon, the first of the wildebeests slide down the steep bank and into the river. And just like that, the migration begins. The zebras’ shrieking bark seems to offer directional guidance to the wildebeest, who in two and then three single-file lines half-swim, half-gallop through the water to the greener pastures on the other side.

Zebras, we discover, are the bouncers of the wildlife world.

After that first crossing, we begin stumbling on crossings on a regular basis. The next morning we watch a particularly large group of wildebeest for 20 minutes when suddenly a lioness bounds in from the left. We watch, dumbfounded, as she charges the unlucky wildebeest directly in her path. As she wrestles her prey to the ground, the zebras’ shriek grow even more shrill and the tide of wildebeests reverses course.