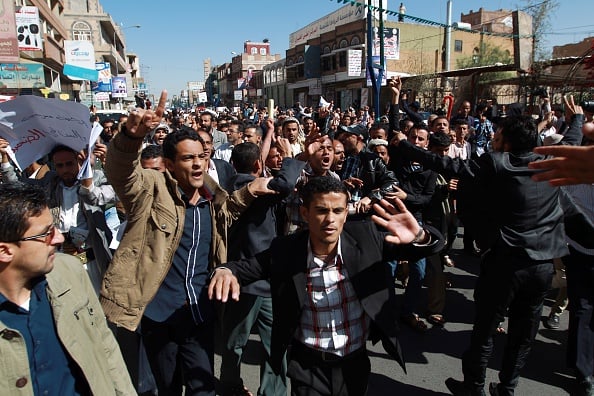 The parties, which are seen as close to President Abd-Rabbu Mansour Hadi, said they walked out of the talks after the Houthis reneged on previous promises.

Hadi, who was backed by the United States and seen as an ally in its war on the Sunni Muslim militant group al Qaeda, resigned on Thursday after Houthi fighters crushed his presidential guards and deployed outside his home.

In an effort to prevent Yemen slipping further into tribal unrest and turmoil, the various political forces agreed to talks to try to overcome the gathering crisis.

However, the Islamist al-Islah Party, the Socialist Party and the Nasserist Party swiftly decided to abandon the negotiations, accusing the Houthis of reneging on a previous agreement to reject Hadi’s resignation.

Mohamed Qabati, the spokesman for the three parties, said they were also angry about a Houthi crackdown on recent protests. There was no immediate comment from the Houthis.

Houthi fighters, a guerrilla force drawn from a Shi’ite minority that ruled a thousand-year Kingdom in Yemen’s highlands until 1962, seized the capital Sanaa in September.

They turned on Hadi last week, accusing him of reneging on a power-sharing agreement and are still besieging his residence.

The Houthi’s action sparked the largest demonstrations against the movement since September. Shots were fired by Houthis to disperse a demonstration in front of Sanaa university earlier on Sunday and eight protesters were arrested.

Yemen, a neighbour to top oil exporter Saudi Arabia, risks breaking up following the dramatic ascent of the Houthi movement.

In the southern city of Aden, once the capital of a Marxist independent South Yemen, the local security committee has said it will no longer receive orders from the capital Sanaa.

“People are angry, people are scared. The worst is that it could turn into a civil war,” a diplomatic source said.