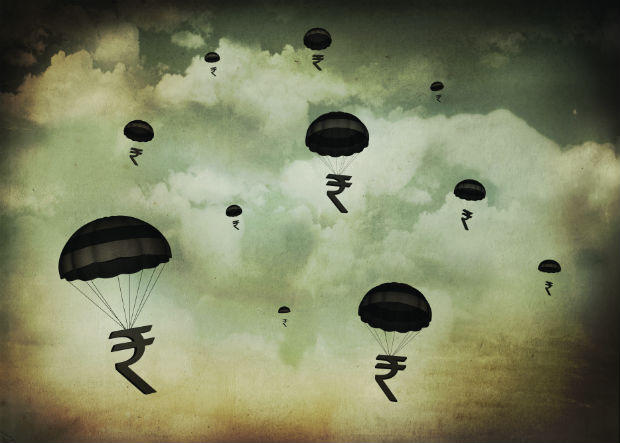 The tumbling Indian rupee sparked panic as it touched record lows and spiked inflation in August this year. However, the rupee stabilised at the close of the month with news of Raghuram Rajan – former chief economist at the International monetary Fund – being appointed as the governor of the Reserve bank of India.

According to a World bank report released earlier this year, global remittance flows increased 10.77 per cent in 2012 to $514 billion, up from $464 billion in 2011. India received the highest amount of remittances totalling $69 billion, followed by China, which received $60 billion.

“It is generally believed that Indians working abroad save 70 per cent of their disposable income,” said m.R. Raghu, senior vice president-research at Kuwait Finance Centre.

Raghu said that the remittance outflow from the GCC has been historically high due to its reliance on an expat workforce.

Gaurav Kashyap, head of futures at Alpari, a global online currency and commodity broker, said that the UAE will see an increased capital flight if the rupee continues to weaken.

“Loan activity from UAE banks has increased as Indians take on more liability locally to remit back home and capitalise on the weak rupee,” he said.

However, the surge in the outflow of remittances will not dramatically affect the UAE economy, experts said. “The UAE, which enjoys a current account surplus, would be marginally affected by surging remittances,” said Raghu.

TAXES AND CAPS ‘PINCH’ THE UAE

One of the capital control measures adopted by the Reserve Bank of India is the reduction of the cap on outward flow of remittances from $200,000 to $75,000 per year, which could slow down investments in Dubai’s real estate sector.

According to Dubai’s Land Department data, Indians contributed to the biggest portion of foreign investments in Dubai’s real estate market with transactions worth Dhs8 billion during the first half of 2013. “We could see this trickling into lower real estate transactions from Indians in Dubai,” said Kashyap.

Indian investors have traditionally demonstrated a strong interest in Dubai’s real estate. Earlier this year, Dubai real estate developer Emaar said that it had recorded “strong investor response” for its Dubai-based projects during a roadshow in India.

“For wealthier Indians, the real estate market in Dubai has provided an attractive alternative to their underperforming equity and real estate markets back home. Such capital controls will limit this activity and would make real estate in the UAE much less accessible to this particular demographic of investors,” Kashyap said.

He added that most of the Indian remitters would not be able to exhaust the new cap, which would insulate the GCC from the effects of a rupee free fall.

However, the same cannot be said for electronics retailers in the region.

Raghu said the government’s efforts to stem the currency slide, which included a duty on all flat-panel televisions (LCD, LED and plasma), could be a blow to the UAE’s retailers.

Beginning late August, India announced a levy of 36 per cent of duty on flat-screen televisions imported into the country. Previously airline passengers were allowed to carry televisions worth up to Dhs2,022 into India without paying duty.

According to data from Dubai Exports, India is Dubai’s biggest export market with goods totaling Dhs36 billion being exported last year. The Indian market showed a robust demand of eight million flat screen televisions a year while 3.5 million of these were imported to the country, estimates from the Consumers Electronics and Appliances Manufacturers Association show.

“Such measures (import duty) may also be imposed on high-end mobiles and laptops, if the rupee continues to slide,” said Raghu.

But the retail industry also stands to benefit from a weak rupee since consumers can now buy Indian products at a much cheaper rate with cost of imports falling, said Raghu.

The UAE’s NRI community received another blow in August as the Indian government hiked up bullion taxes in another move to steady the rupee.

New Delhi tightened control over gold imports – the highest contributor to the country’s current account deficit – and raised the duty from eight to 10 per cent.

According to data from the Gold Council, bullion consumption in India accounted for about 20 per cent of global demand in 2012.

But Kashyap said that the government’s measures would not have a large impact on the demand for gold.

“This is the second such import hike this year – the RBI increased the duty from six to eight per cent in June and despite this, the demand for gold remained elevated. Following record months in April and May, gold imports increased 18 per cent to a total of $2.9 billion in July, one month after the hike.”

“Such measures have a very short term impact on the prices of gold, and have not proven to constrain gold demand in the long run. Prices will continue to remain volatile and demand insatiable.”

India is also one of Dubai’s largest tourism source markets, according to data from Dubai’s Department of Tourism and Commerce Marketing.

But concerns about tourist numbers slowing due to a weak rupee are largely unfounded, Kashyap said.

“The impact on the UAE tourism sector [due to a rupee slide] will be negligible. The continuous weakening of the currency would have a lag effect and, if anything, would reflect in the first quarter of 2014 as opposed to now.”