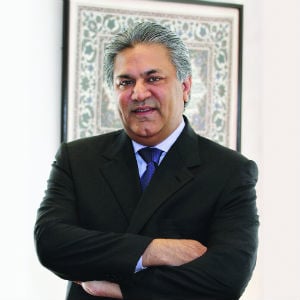 The founder of private equity firm Abraaj Capital must be feeling pretty pleased with himself this year. After selling his stake in Turkish hospital group Acibadem for a “significant profit”, Arif Naqvi can rest easy that his firm was first to spot a major regional trend in private equity – the health sector.

“In 20 years of investing, I’ve never given the game away. But we did recently invest in a Moroccan insurance company, so if I were you I’d read this as a trend,” says the founder of the region’s largest private equity firm, with assets of around $7.5 billion.

Fifty-one-year old Naqvi’s office is palatial and adorned with tasteful, expensive-looking pieces of art. But most noticeable is the flickering news screens that beset his large desk. This is a man with an investment brain that never stops. Which is probably why Naqvi is behind some of the region’s largest and most successful deals, from Aramex (the Arab world’s only Nasdaq listing) to low-cost carrier Air Arabia. The group CEO remains at the top of the regional private equity food chain even as less sturdy competitors were felled by the recession.

He also comes across as measured, not your stereotypical bullish embodiment of a private equity pioneer. “People think the private equity industry is one in which you take large risks,” he says. “On the contrary, if you look at the people that succeed, they take measured risks and are always alert to the circumstances around them.”

The regional private equity market is still beset with woes following the global economic crisis. According to figures from Zawya.com, MENA transactions dropped by more than half to $159.4 million in 2011 from $345 million in 2010. However the value of announced exits rose 17 per cent to $385.7 million from $329.6 million.

In a surprise and pivotal move this year, Abraaj Capital acquired Aureos, which manages assets of $1.3 billion and provides expansion for buyout funding to small and medium-sized businesses in Asia, Africa and Latin America. The firm said the deal was raised purely from Abraaj’s balance sheet.

“It was an exciting transaction for us. In many ways it marked a watershed moment in the private equity industry as it represented a consolidation between two emerging markets. The acquisition accelerates our entry into East Asia, sub Saharan Africa and Latin America,” he says.

“The move showed that more and more growth markets are going to convene around these deals,” – Naqvi prefers the term ‘growth markets’ to ’emerging markets’ as many of these markets have “already emerged”.

It’s been an active year for Abraaj with several investments announced in the past few months, including Viking, Saham Finances, The Entertainer and Kuwait Energy, as well as rumoured stakes in Turkish media. Today the CEO remains circumspect about the survival of private equity deals in a world that is marred by the Arab Spring and an impending ‘Grexit’. “Private equity has been in search of an identity because for many years the firms have been judged by their ability to beat market benchmarks.

“Many sectors of the private equity market relied on leverage to produce the last dollar of return, but many others relied on value-add investment growth,” he says.

“The issue of how firms calculate their returns has often been a matter of debate. However besides that, the imperative for private equity firms has to be one of job creation and value-add in their portfolio companies.”

Naqvi says that growth opportunities lie in new markets that have seen “social and economic liberalisation”. He talks of the some 1.2 billion people that represent a growing middle class across the growth markets. Incidentally, this is a figure that apes the entire OECD population today.

“Four-hundred-and-twenty-five cities are going to account for 45 per cent of global growth. These are the cities of the future and I believe the opportunity available to long-term investors in these growth markets is phenomenal.”

Closer to home, Naqvi says the euphoria of the ‘Arab Spring’ has been replaced by pragmatism.

“Yes [the Arab Spring] was disruptive, but in a way it was an inevitable disruption. I remember giving a talk about it saying that if we don’t focus on youth unemployment and youth empowerment, it will rebound on us. We must remember that at the end of the day, it was economic marginalisation and the desire for economic dignity that sparked the Arab Spring,” Naqvi says.

“It is important to acknowledge what needs to be done now. We need to focus on employment, on fostering the spirit of enterprise and on investing in sectors like education, infrastructure development and vocational training. I also believe it is very important for young people to have role models from their own countries. It gets someone thinking that ‘I could be like that guy’ – and that sense of aspiration and identity is an important and a hugely motivating force.”

How private equity is well poised to leverage opportunities