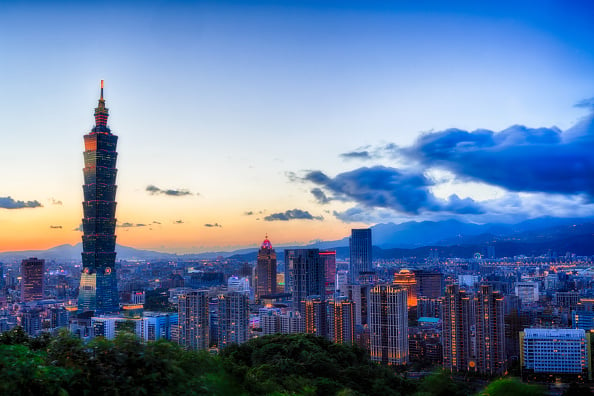 Holux Technology director of sales and marketing Eddy Huang is upbeat about his company’s prospects as he excitedly displays his firm’s latest wearable smartwatch – the Impulse 8100. The product marks Holux’s foray into wearables, deviating slightly from its core car navigation devices. For Huang, it is no less than a test as he looks to revitalise sales, which took a hit after smartphones began featuring global positioning systems.

The firm is among many in Taiwan looking to diversify their focus from the country’s traditional industry, manufacturing hardware parts.

Faced with these figures, it comes as little surprise that Taiwanese manufacturers are talking about the next big phenomenon – the ‘Internet of Things’.The concept aims to connect people and devices to build a smart society.

“We see a big decline in PC sales so every company in Taiwan including manufacturers, suppliers, and semiconductor firms is trying to find the next step. IoT is one thing that every body is looking at,” affirms research firm IDC Taiwan’s associate research director Helen Chiang.

The erstwhile PC manufacturing hub Taiwan could be in an ideal position to cash in on this expected boom for connected devices, especially for sensors and chips – says Chiang.

“Taiwan has a good position in hardware – not just in final assembly but for different kinds of sensors in devices. To manufacture sensors, you need knowledge in analogue technologies and that could benefit the country.”*

Preparing for the boom

Taiwan’s early focus on IoT has been endorsed by a number of stalwarts. Recently Acer Inc founder Stan Shih said that IoT will be Taiwan’s next big market opportunity, urging firms to leverage their hardware experience to tap into the upcoming boom.

Acer, which can relate the most to falling PC sales, was one of the fastest to realise the need to diversify from hardware. The PC firm ventured into cloud computing with its ‘Bring Your Own Cloud’ initiative and aims to make all Acer devices localised data centres.

“Last year we talked about changing the direction and not just staying in the hardware business, which is a tough business,” says BYOC business group president Maverick Shih.

“We are looking at a future that needs both hardware and software so we are moving in a new direction that is hardware, software and services.”

While Acer might require a broader change in strategy to tap into IoT, local semiconductor firm Mediatek could benefit immensely if IoT picks up.

The Taiwanese firm, number two in the world for producing chips used in tablets and smartphones after Qualcomm, is expecting to ship 10 times the number of chips in the IoT era.

But in the vast potential of IoT it is also possible to lose focus unless these firms narrow down on verticals, IDC’s Chiang warns.

MediaTek’s general manager of new business development JC Hsu agrees. “We need to be focused as there are so many application domains in IoT. So we have to select the bigger opportunity for us,” he says.

The semiconductor firm has identified verticals including smart health, smart cities and smart industry. But Hsu suggests that Mediatek’s immediate focus will be on wearables, smart vehicles and smart homes – especially in home security cameras.

Elsewhere, Holux has narrowed down healthcare and smart homes as its key focus verticals for IoT solutions.

Amid this changing market, analysts are also quick to warn that IoT may not have the same impact as PC sales unless firms can figure out a new business model.

“The business model is volume based in PC and tablet production. In IoT, total solutions will be more important so volumes cannot be as high as with PCs but profitability margins could be much better. However, a lot of things need to be changed to transition from the old business model to a new suitable business model. I think it will take time for IoT revenues to make up for [declining] PC sales,” says Chiang.

Towards the Middle East

As Taiwanese firms position themselves for an IoT boom, the Middle East is not far from their minds. According to a report from Deloitte, the Middle East’s IoT hardware and services revenues are expected to reach nearly $2bn in 2015.

Advantech, a Taipei-based intelligence solutions provider, is expecting business growth of 20 to 30 per cent due to the region’s focus on smart cities. Speaking to Gulf Business at the company headquarters in Taipei, Advantech’s manager of intelligence services group Allen Tsai says that this growth will be driven by mega events like Expo 2020.

“As Dubai is focusing heavily on Expo 2020 and building a smart city, the government is looking for solutions which can enable that. We see a big boom in the healthcare, retail and hospitality sectors.”

The firm has $10m worth of computing deals with major public and private sector firms in the region. These include Dubai Water and Electricity Authority and the new Midfield Terminal project in Abu Dhabi. The firm’s automation business has also seen steady growth over the last two years.

“In automation, we have had deals worth $5m to $6m last year. But the growth rate in the automation business will be more significant. We have seen 30 per cent annual growth since 2012,” says the company’s channel sales manager for the intercontinental region Darren Chen.

The company has decided to open an office in Dubai in Q1 2016 to support its top regional markets the United Arab Emirates and Saudi Arabia.

“Annual growth of 30 per cent is very meaningful for us and we see continuous opportunities for further growth in the region,” says Chen.

Although the Middle East looks rosy to established players like Advantech, many others have yet to explore the market – where Chinese firms already have a strong presence. Meanwhile many firms have to renew their partnerships as they shift their focus in line with the new trend. Holux has yet to find a partner in the Middle East for its new products, Huang says.

“We have a partner in Iraq, Saudi and the UAE especially for GPS products. But now we need to find new people to promote our new products and those distributors are not suitable as they don’t have the know-how.”

 Top tier tech executives will have to overcome these difficulties and others for Taiwan’s IoT gamble to pay off.