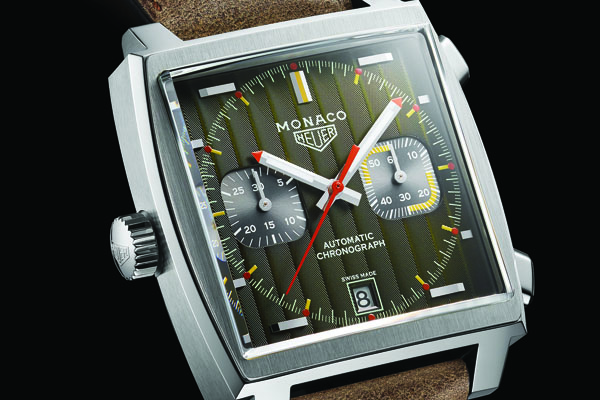 The iconic square-cased TAG Heuer Monaco was during its debut in 1969, the first ever square, water-resistant automatic chronograph.

That the crown was placed on the left, was meant to signal that it was an automatic-winding timepiece that didn’t require its wearer to wind the watch.

Its real-life and reel-life positioning as the ultimate racing watch was cemented first when it made it appeared on the track on the wrist of Swiss F1 driver Jo Siffert in 1970, and then on the wrist of Steve McQueen in the 1971 film Le Mans. 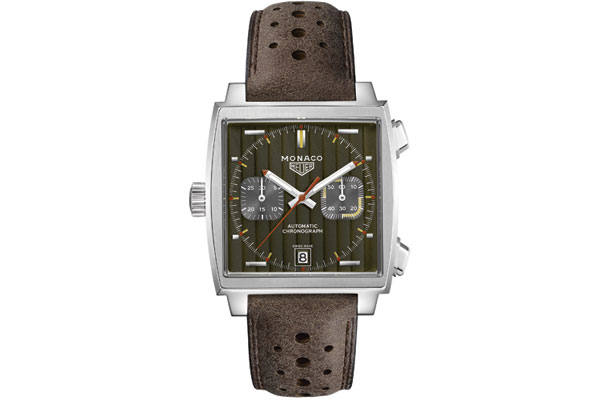 This year, to mark the 50th anniversary of the timepiece, TAG Heuer announced a collection of five limited-edition Monaco timepieces, each of which are dedicated to a decade in the history of the Monaco watch.

This Monaco 1969-1979 Limited Edition which was released earlier this month has a green dial featuring the vertical Côtes de Genève pattern and an hour and minute hand filled with luminescent material. The 39mmx39mm stainless steel case is fitted with a perforated brown calfskin leather strap.

In an attempt to create this as a faithful reinterpretation of a classic, this new timepiece is fitted with a Calibre 11 movement that operates at a frequency of 4Hz (28,000vph) and has a power reserve of 40 hours.

Limited to just 169 pieces, and priced at $6,550 each, the first Monaco of the five-piece collection certainly appears to be worthy of becoming a collector-grade timepiece.