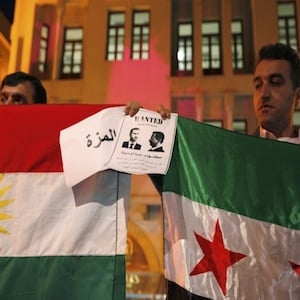 Unrest in Syria is causing chaos at the country’s banks, which posted bumper profits last year as a plunge in Syria’s currency boosted foreign exchange gains, but will struggle this year in the face of rapidly declining deposits and rising bad loans.

The country’s 14 privately owned banks, mostly subsidiaries of Arab banks, have weathered the 11-month uprising against President Bashar al-Assad’s rule, and the civil unrest and international sanctions that have accompanied it, thanks largely to a windfall from their foreign currency holdings in the wake of a 39 per cent depreciation in the Syrian pound.

The central bank has encouraged banks to maintain high foreign currency holdings as the country’s foreign exchange reserves have diminished since the political turmoil began.

Net profit at Chambank, one of three private Islamic banks in Syria and 32 per cent owned by Commercial Bank of Kuwait, soared 553 per cent last year, standing out among a string of strong earnings reports from the banking sector.

“A lot of the Syrian private banks held a lot of dollars and because of that this gave them a huge windfall. They took advantage and made exceptional profits,” said Talal Samhouri, a Jordan-based financial expert and asset manager.

Surging profits, however, masked lower operating income and a fall in the value of banks’ assets, which will become much more evident this year. Chambank had to set aside nearly the same amount as its net profit to cover doubtful loans last year.

Until the uprising a year ago, banks had enjoyed a decade-long credit boom after the state relinquished its monopoly on the sector, making banks the showcase of economic liberalisation as they took advantage of an underbanked market in the country of 20 million.

Now analysts question how many banks will survive as the uprising and Western sanctions have crippled Syria’s economy and triggered capital flight, causing total bank deposits to drop by almost a third since the unrest began.

Customers are still switching to dollars and hoarding savings or smuggling them to the relative safety of neighbouring markets such as Lebanon, Jordan and Turkey, bankers say.

“Banks are facing dire pressures that could threaten the very survival of some of the smaller banks if operational revenues continue to plunge dramatically. We could even see mergers or bankruptcies down the road if Syria slides into civil war ,” said one banker at a prominent Lebanese bank.

Before the uprising, the total assets of Syrian banks, public and private, stood at 2 trillion Syrian pounds ($43 billion), a small amount compared with neighbouring countries.

Syria’s four state-owned banks still have a dominant share of the local market, although most non-government business goes to the 14 private banks.

Offshoots of Lebanese banks, the first to enter the Syrian market and whose Syrian operations had driven their profits in recent years, appear more resilient than later arrivals including the units of Gulf and Jordanian banks, bankers say.

Syria’s old mercantile class, which traditionally did business through Lebanon’s banking system and still has large shareholdings in some Lebanese banks’ Syrian branches, provides a solid customer base for Lebanese banks.

Aggressive lending by late entrants to the Syrian market in the last few years means their loan portfolios could expose them more to bad debts, bankers said.

“The Lebanese banks have already passed stages that we are still going through. In our case it’s still the launching stage, with costs…for branches that need to be set up. The damage will be bigger,” said a manager of a bank in Damascus with a large Jordanian shareholding, who asked not to be identified.

Lebanon’s Audi Bank, for example, saw its Syrian deposit base roughly halve last year but still turned a profit in Syria despite an 83 percent drop in net income as it cushioned its balance sheet with hefty provisions in anticipation of more bad debts.

As the unrest has now spread to large swathes of Damascus and to the country’s economic capital Aleppo, bankers fear a plunge in the value of real estate collateral could further expose troubled loan portfolios.

On top of this, Syria’s central bank raised interest rates from the start of this year to between 9 and 11 percent on deposits, from 6-7 percent, to stem the run on the banks, adding to banks’ costs.

Tightening sanctions by Belgium-based SWIFT, which provides banks with a system for moving funds around the world, have made it harder for banks in Syria to transfer foreign currency. More customers now head to Lebanon and Jordan to open letters of credit in dollars and even to do normal commercial transfers with parties overseas, which Syrian banks can no longer undertake .

Bankers say few banks are willing to sell scarce foreign currency to customers – even after the central bank last month lifted restrictions on the sale of dollars at market prices, a moved aimed at relieving pressure on state banks’ financing of imports.

The central bank requires banks to have cash to cover at least 30 percent of their foreign currency holdings and deposits; banks still comfortably exceed that minimum. But bankers are privately worried that the worsening security situation could accelerate the hemorrhage in deposits, which had shown some signs of abating in recent months.

“The biggest coming challenge that relates to risk in the Syrian banking sector is the growing liquidity problem,” said a senior banker at a leading privately owned bank in Syria, who requested anonymity.

He said some banks were already putting together contingency plans that could involve asking for central bank support, such as a currency swap which would allow banks to obtain Syrian pounds if there were a bigger run on deposits. Another rescue step might be a cut in the minimum reserves which Syrian banks are required to hold.

But other bankers say Syrian authorities have traditionally eyed the country’s mainly foreign-owned private banks with suspicion, so they doubt the authorities would come to the banks’ defence in the event of a major crisis.

“The central bank doesn’t…view private banks as instrumental to spurring the economy,” a Syrian banker familiar with central bank thinking said, adding that monetary authorities had failed to give banks dollars despite pledges to do so in recent weeks.

“I doubt they will intervene. They will just add pressure on us to increase provisions, and won’t give us much flexibility.”