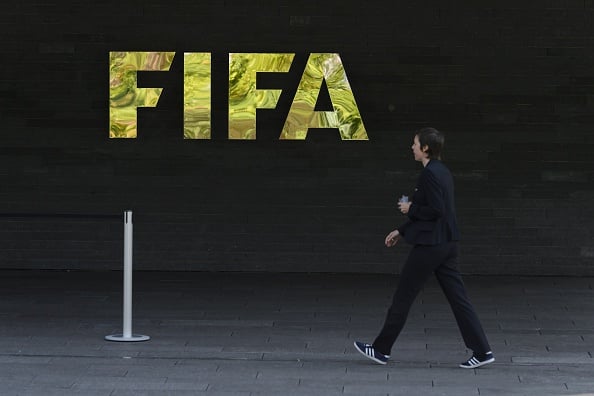 The world’s most popular sport was plunged into turmoil on Wednesday as seven senior soccer officials were arrested on U.S. corruption charges and faced extradition from Switzerland, whose authorities also announced a criminal investigation into the awarding of the next two World Cups.

The arrests in a dawn raid at a five-star Zurich hotel mark an unprecedented blow against soccer’s governing body FIFA, which for years has been dogged by allegations of corruption but always escaped major criminal cases.

U.S. prosecutors said they aimed to make more arrests but would not be drawn on whether FIFA President Sepp Blatter, for long the most powerful man in the sport, was a target of the probe. Blatter, 79, is standing for re-election to a fifth term at the FIFA Congress in Zurich on Friday, and FIFA said the vote would go ahead as planned.

The European soccer body UEFA called for the election to be postponed, saying “the European associations will have to consider carefully if they should even attend this Congress.”

The Asian Football Confederation, which represents 47 member nations and has been a steadfast ally of Blatter, re-affirmed its support for the FIFA boss on Thursday, and pushed for Friday’s election to go ahead.

In a scathing indictment of corruption in soccer, U.S. authorities said nine officials and five sports media and promotions executives were charged in cases involving more than $150 million in bribes over a period of 24 years. They said their investigation exposed complex money laundering schemes, millions of dollars in untaxed incomes and tens of millions in offshore accounts held by FIFA officials.

Swiss police arrested the seven, all from the Latin American and Caribbean region, and detained them pending extradition proceedings to the United States, which could take years if they contest the process. The Federal Office of Justice in Switzerland said that six would contest extradition, but that one person agreed to be extradited.

“As charged in the indictment, the defendants fostered a culture of corruption and greed that created an uneven playing field for the biggest sport in the world,” said Federal Bureau of Investigation Director James Comey. “Undisclosed and illegal payments, kickbacks, and bribes became a way of doing business at FIFA.”

Blatter, who has denied and survived allegations of his involvement in corruption, said in a statement: “Let me be clear: such misconduct has no place in football and we will ensure that those who engage in it are put out of the game.”

The statement also said that FIFA welcomed the actions and the investigations “and believe that it will help to reinforce measures that FIFA has already taken to root out any wrongdoing in football.”

Separate from the U.S. investigation, Swiss prosecutors said they had opened their own criminal proceedings against unidentified people on suspicion of mismanagement and money laundering related to the awarding of rights to host the 2018 World Cup in Russia and the 2022 event in Qatar.

U.S. Attorney General Loretta Lynch told reporters at a news conference in New York her office did not want to impede the 2018 and 2022 World Cups but looked forward to working with Swiss authorities investigating the award of the tournaments.

“FIFA has a lot of soul searching to do,” she said.

The indictment accused the officials of using a variety of schemes to take kickbacks and bribes from sports marketing firms connected to major tournaments, and also alleged corruption in the selection of the 2010 World Cup host and the 2011 FIFA presidential election.

One of those indicted, former FIFA Vice President Jack Warner of Trinidad, solicited $10 million in bribes from the South African government to host the 2010 World Cup, the Justice Department said.

Warner directed a number of co-conspirators to arrange the payment, which was eventually sent from a FIFA account in Switzerland to a Bank of America account in New York that Warner controlled, the indictment said. The South African Football Association called the bribe allegations “baseless and untested.”

“THE BEGINNING … NOT THE END”

Warner, a former president of CONCACAF (Confederation of North, Central America, Caribbean Association Football), said in a statement that he was innocent of any charges. He surrendered to the police mid-afternoon in Port of Spain, made an initial court appearance on 12 charges of corruption, money laundering and racketeering and was granted TT$2.5 million ($400,000) bail.

The United States took jurisdiction of the case in part because the Internal Revenue Service and the FBI secured the cooperation of U.S. citizen Chuck Blazer, a former top FIFA official, who U.S. officials said had not paid taxes for years.

Kelly Currie, the acting U.S. attorney in Brooklyn said Wednesday’s charges brought in the New York City borough represent “the beginning of our effort, not the end.”

Early Wednesday, FBI agents carrying bags and boxes to execute a search warrant went into the group’s office in Miami Beach. Agents also used a search warrant at the offices of Traffic Sports in Miami.

CONCACAF said in a statement it was “deeply concerned by today’s developments” and that “the Confederation will continue to cooperate with the authorities to its fullest capacity.”

In addition to Blazer, 70, others who pleaded guilty were José Hawilla, 71, owner of the Traffic Group, a sports marketing firm founded in Brazil, and two of his companies; Daryan Warner, 46, and Daryll Warner, 40, sons of Jack Warner.

“It is clear that the case is based in large part on some cooperating insiders who have already plead guilty,” said Miami lawyer David Weinstein, former prosecutor.

The FIFA officials appeared to have walked into a trap set by U.S. and Swiss authorities. The arrests were made at dawn at a plush Zurich hotel, the Baur au Lac, where officials are staying before the vote. Suites at the hotel cost up to $4,000 a night.

The arrests could have implications for sponsorship.

The indictment said that in 1996, an unidentified global sports company agreed to pay $160 million over 10 years to become Brazil’s exclusive footwear, apparel, accessories, and equipment supplier. That was an apparent reference to Nike Inc , which sponsored the Brazil national team.

Nike said that it was cooperating with authorities. “Nike believes in ethical and fair play in both business and sport…,” a company statement said.

The indictment said that the company agreed to additional financial terms not in the initial contract. This included paying an additional $40 million to “a Traffic affiliate with a Swiss bank account” and referred to as “marketing fees.”

German sportswear company Adidas, long associated with FIFA, said the soccer body should do more to establish transparent compliance standards. Anheuser-Busch InBev, whose Budweiser brand is a sponsor of the 2018 World Cup, said it was closely monitoring developments at FIFA.

Coca-Cola Co, another FIFA sponsor, said the charges had “tarnished the mission and ideals of the FIFA World Cup and we have repeatedly expressed our concerns about these serious allegations.”

Officials said that following the arrests, accounts at several banks in Switzerland had been blocked.

The officials arrested in Zurich are: Jeffrey Webb, vice-president of FIFA, president of CONCACAF and head of soccer in the Cayman Islands; Eduardo Li, who runs Costa Rica’s soccer federation; Julio Rocha, who headed Nicaragua’s federation; Eugenio Figueredo, another FIFA vice-president who used to run Uruguayan soccer; Rafael Esquivel who is the sport’s boss in Venezuela; Jose Maria Marin, who used to be the head of Brazil’s federation; and Costas Takkas, another CONCACAF official.

Those detained or their representatives were not available to comment.

Lynch said in a statement that the charges span “at least two generations of soccer officials who, as alleged, have abused their positions of trust to acquire millions of dollars in bribes and kickbacks.”

The international governing body of football collects billions of dollars in revenue, mostly from sponsorship and television rights for World Cups. It has been dogged by reports of corruption which it says it investigates itself.

“The chickens are finally coming home to roost and this sounds like a hugely significant development for FIFA,” said Damian Collins, a British member of parliament who founded the reform group New FIFA Now.

“This should have happened long ago!” said Wilson Suares, 66, a newspaper seller, in Rio de Janeiro, the city that is for many soccer’s spiritual ‘home’. “All those people are just there to steal,” he said, in views echoed in streets and Tweets across soccer-mad Latin America.

FIFA’s decision to award the World Cup to Qatar, a tiny desert country with no domestic tradition of soccer, was heavily criticised by soccer officials in Western countries. FIFA was forced to acknowledge that it is too hot to play soccer there in the summer when the tournament is traditionally held, forcing schedules around the globe to be rewritten to move the event.