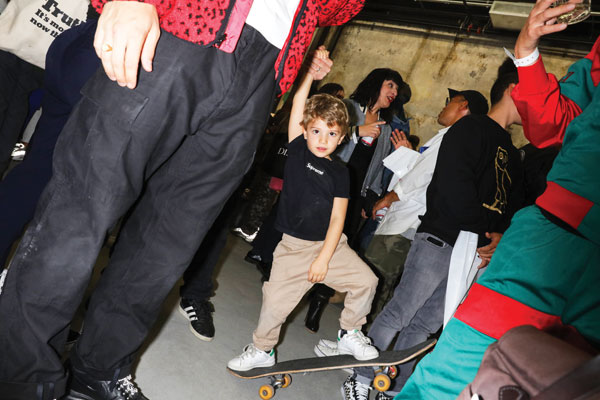 In December 2002, the skaters came for Deitch Projects, or maybe it was the other way around. For the exhibition Session The Bowl, a huge skate bowl was built into the gallery’s Wooster Street space, and on the opening night, and for weeks afterward, you could find skaters hanging out and dropping in. They were on the walls, too: The gallery was displaying work by skate-friendly artists like KAWS and Ed Templeton. (Alife took over Deitch’s Grand Street location around the corner for a complementary installation.)

“It really is a live sculpture,” Jeffrey Deitch told The Washington Post at the time, a thoughtful explanation of the rowdy setting that wasn’t wholly right. “Session the Bowl” was a merger, one once-insurgent downtown New York scene embracing another, borrowing some of its insouciance while welcoming street culture into a luxury environment, on terms both could deal with. 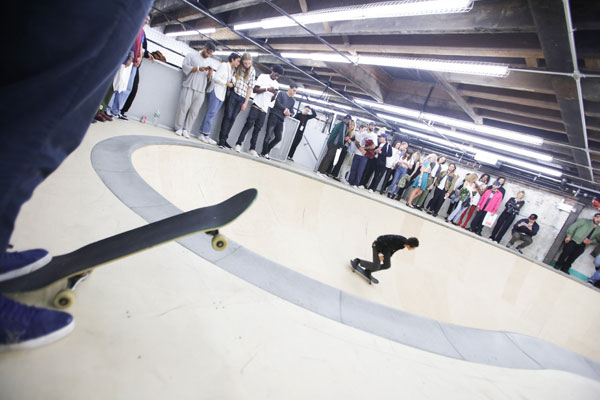 By that point, the original Supreme store on Lafayette Street had been open for eight years, and the brand had helped codify the New York skater, tougher and scrappier and with better taste in music than its California brethren.

But a decade and a half later, all the signifiers are now mixed up: Supreme has been woven into the fashion firmament, thanks to a series of shrewd partnerships, both in the high-fashion and street-wear worlds. It recently collaborated with Louis Vuitton on a capsule collection. The Lafayette store has become a tourist attraction and a generator of long lines, requiring high levels of emotional fortitude to navigate. Skating feels ancillary.

And so the bowl that takes up the back half of the new Supreme store in Williamsburg, Brooklyn has some of the performative qualities of that Deitch Projects exhibit. (By coincidence, it was built by Steve Badgett, who worked on the Deitch Project bowl.) There is a bowl in Supreme’s Los Angeles store, too, but this one looms larger. 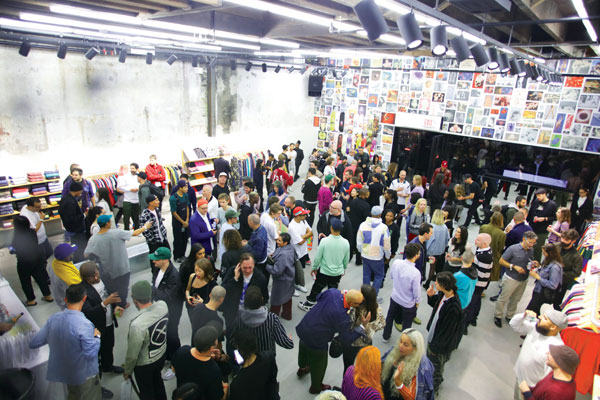 Within minutes of the party’s start, skaters were feeling out its contours, while non-skaters were taking to the cameras on their phones, to show the world that they were near skaters. The later it got, the more people were squeezed around the bowl’s rim, participants and observers in symbiosis.

Read: Travel review: On the streets of New York City

Down on the floor, Supreme was showing off its latest collections, which include collaborations with the artist Andres Serrano, the Italian outerwear specialist Stone Island and the conglomerate Nike. There were things to be had for under $50, and also for more than ten times that, reflecting the brand’s role as both entry point and end goal. It is also the raw material for a vibrant and thirsty resale ecosystem with prices that can rise exponentially on the internet’s grey markets.

Putting a Supreme in Brooklyn doesn’t mean what it might have in the bleeding-edge Williamsburg of two decades ago, or in its partly gentrified late-2000s version. It’s a family neighbourhood now – a wealthy family neighbourhood – with seven-figure condominiums and Michelin-starred restaurants. With square footage that’s about three times the Lafayette store, this location figures to be more relaxed than the flagship: a place where the brand can breathe, a reclaiming of the hometown, a maturation without surrender. 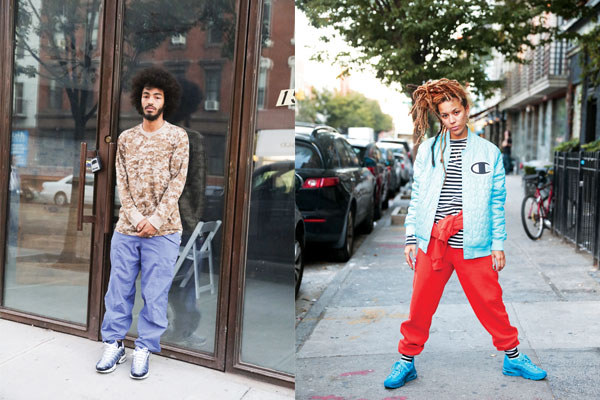 In the crowd, there were skaters (Mark Gonzales, Sage Elsesser), celebrities (Amar’e Stoudemire, James Franco), avatars of good taste (Mister Mort, Venus X), at least two people in hyper-chunky Balenciaga Triple S sneakers, a troupe of public relations representatives and, out on the street, security alternating between pushing people off the sidewalk and back on it. (And also children: There were probably more attendees under the age of 13 than, say, between 13 and 20.)

And of course, there were the hounds. Nothing was available for sale at the party – the store officially opened shortly after the opening party – but there was a special T-shirt made for the occasion, with a yellow, green and black camouflage box logo, exactly the sort of limited item the brand’s loyalists salivate over. And indeed, late in the night, some of them were out on the street, sidling up to people who walked out with white Supreme bags and offering them cash. Not long after, some shirts were already selling on eBay for more than $1,000. A live sculpture, to be sure.