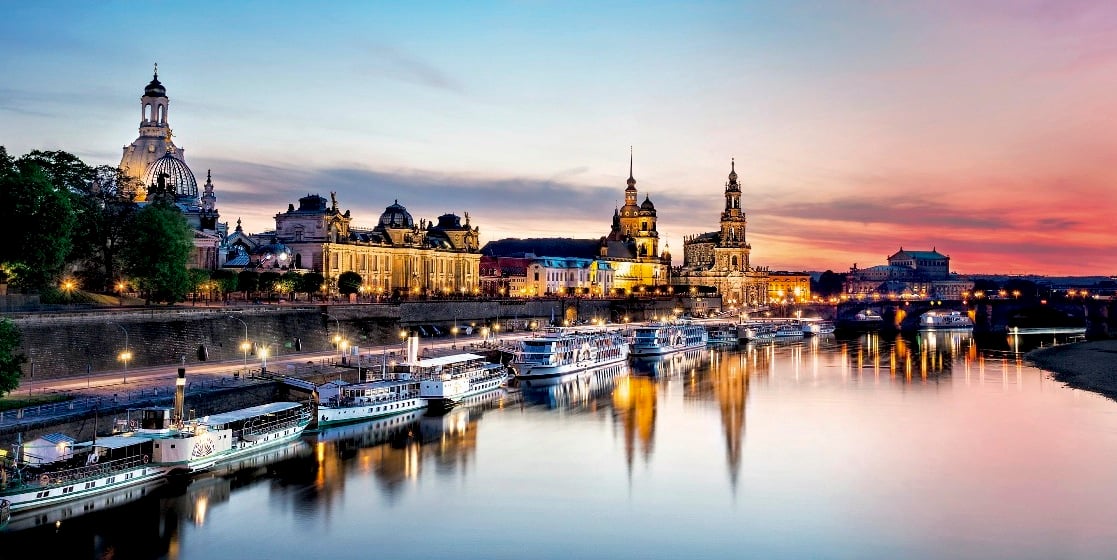 It is impossible to describe a trip to Saxony without using a string of superlatives. After all, this not-too-large state in the east of Germany comes with some lofty accomplishments. For history buffs there is Europe’s highest fortress Konigstein and the world’s oldest paddle steamer.

Art lovers can glimpse one of the most famous paintings in the world, the Sistine Madonna, or attend a concert at Europe’s oldest orchestra Gewandhaus. Meanwhile, shopaholics can bring back Meissen accessories from the region that introduced Europe to porcelain.

Whether you are looking to experience the best of Europe, or simply want to tick these record-breakers off your travel bucket-list, head to Saxony. Because some places really do have it all.

The capital city of Dresden holds at its heart some of Europe’s most striking baroque architecture. Stand on the bridge, over the serene Elbe, and the city seems picture-perfect with its gigantic stone domes, gold-tipped spires reaching for the sky, opulent palaces and breath- taking churches.

Little wonder that this German city was once crowned ‘Florence of the Elbe’. Most of the baroque beauties can be credited to the 18th century ruler, Augustus the strong. The king was notorious for his varied taste in women – he was rumoured to have fathered over 300 children – but when it came to his capital, one can see his loyalty to a particular style.

The two most famous structures are the Frauenkirche and the Zwinger. The former was once a Roman Catholic Church and later converted to the protestant faith. With the conversion, came the current blueprint. Its majestic dome – 96 metres tall and one of the highest in Europe – has become a symbol of Dresden. You can climb to the top to get a bird’s-eye view of the city. Or take in the Baroque altar with its biblical sculptures.

One look at the place today and it is hard to believe that the Frauenkirche was destroyed by the Allies in the bombing raids of WW2. Subsequently, Dresden fell behind the Iron Curtain and for decades the church lay in rubble in the centre of the city; until the reunification of East and West Germany when the locals decided to put it back together brick-by-brick.

Similarly, the Zwinger, the party palace of Augustus was built to bowl guests over. Lavish courtyards come with nymph-dotted fountains. Ornate portals open up to a world of opulence and splendour. Intricately carved ceilings and evocative sculptures greet you everywhere in this sprawling structure.

Much like the Frauenkirche, this too was razed in the war and later rebuilt. Today, the Zwinger houses several museums. Even if museums aren’t your thing, do not miss the Old Master’s Gallery to catch a glimpse of the 500-year-old Sistine Madonna by Raphael. Note the two little cherubs at the bottom of the painting, who seemed to have made a career of their own.

With many such architectural marvels, Dresden is undoubtedly among the most beautiful and resilient cities in Europe. Ironically, she has also earned the tag of being the first European city to be taken off the UNESCO Heritage list. The building of a modern four-lane bridge over the Elbe may have led to her losing the title but as any visitor will tell you, the city still wins you over with its old- world charm.

With its Islamic dome and minarets, most visitors mistake the Yenidze for a mosque. It adds a bit of drama to Dresden’s skyline. It is impossible to believe that this is not a masjid but was once a cigarette factory.

The structure was built between 1907 and 1909. It was designed by an architect named Hammitzsch, who was married to Hitler’s half sister. Ironically, Hitler’s brother-in-law was commissioned to create the structure by a Jewish entrepreneur named Zeitz. The proprietor wanted to capture a bit of Turkey as the Ottomans were at the head of the tobacco trade. Incidentally, back in 1881, it was a Dresden local who patented Europe’s first cigarette stuffing machines.

The mosque-like Yenidze was also the world’s first reinforced concrete-framed building. The dome is 62 metres high; taller than the domes of all the (real) mosques in Germany. It comes withemerald and ruby coloured glass and is illuminated by night, such that you can spot it miles away. Look up at one of the minarets and you may just notice that it is actually a chimney. Some believe it was an allegory for cigarettes.

Despite the beauty of the building, the cigarette brand named ‘Salaam Alekham’ was unsuccessful and went under. Today the building houses offices. You can make it inside by visiting one of three restaurants it holds. Or head to the rooftop beer garden.

The loud steam whistle heralds the beginning of the journey; one that started more than 175 years ago. Dresden is home to the oldest and largest paddle steamer fleet in the world, built in the 19th century. Nine lovingly restored steamboats, once used to transport goods, now take visitors on a pleasure trip down the Elbe. And much like they did back in the day, the boats still run on the elements of fire and water. Hop on board to take a trip down memory lane.

STAND ON TOP OF THE WORLD

Europe’s highest fortress, Konigstein, lies just outside Dresden in the area of Saxon Switzerland, aptly named due to its picturesque landscape. At the top of the beautiful town stands the fortress, which was so imposing that throughout the nation’s turbulent history this fort was never attacked.

Built in the 13th century, it sits 260 metres above sea level and was expanded over the centuries to a sprawling 9.5 hectares. A speedy bus ride brings you to the high fortress. Step inside or just lounge around its open spaces and take in the spectacular view – rock formations on which the fort sits, greenery all around and a touch of blue from the Elbe.

BE A WHITE GOLD DIGGER

An alchemist named Bottger was hired by Augustus the Strong to discover gold. Unable to fulfil his duties, he was just about to be marched-off to the gallows when he struck upon porcelain. Back in 1705, porcelain was worth its weight in gold. As economic deals were struck in gold and porcelain, those who lacked the latter had to part with the former.

Bottger’s discovery was aptly termed ‘white gold’. And Europe’s first porcelain factory was set up in Meissen, just upstream of Dresden. Today it houses a world-famous porcelain brand by the same name. Visit the museum to learn more about this precious clay.

The city of Leipzig is a day trip from Dresden. It is where Wagner was born and where Bach spent a large part of his childhood. It is also the birthplace of Europe’s oldest civilian orchestra, the Gewandhaus. Founded in 1743, under the name of the ‘Grand Concerts’, it found its real home in the trading house of the cloth-makers’ guild or the Gewandhaus. The name of the venue caught on and the orchestra was renamed. Be sure to catch a performance of this iconic group.

A trip though Saxony comes with these and many other wonderful discoveries. Given German precision and ingenuity, who knows what they may churn out next.