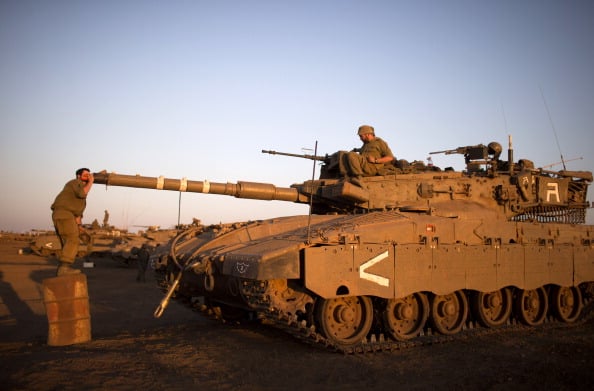 It’s a truism often repeated in the Pentagon and across the U.S. security establishment: In war, the enemy gets a vote.

A US-led cruise missile attack on Syria in response to its alleged use of chemical weapons, which seems increasingly likely in the coming days, could provoke reprisals from Damascus and its backers, ranging from retaliatory missile strikes to terrorist attacks and cyberwar, according to government officials and private analysts.

US military commanders are preparing contingency plans for a potential counter-strike by Syria’s military, defense officials said. The officials expressed confidence that the United States and U.S. regional allies such as Israel could deter or neutralise an immediate response from Syrian President Bashar al-Assad.

A European defense official said the purpose of building up large forces near Syria – mostly in the form of naval assets – was to deter Assad.

“The important thing is to have enough force to control the escalatory response,” said the official, speaking on condition of anonymity.

Even so, “there is no military action without risk, and a punitive strike on Syrian regime forces would carry some. Weapons could hit unintended targets, perhaps killing civilians,” Jeffrey White of the Washington Institute for Near East Policy think tank wrote this week. “The regime could strike back in unexpected ways against U.S. and allied interests, or it could resort to further (chemical weapons) attacks inside Syria.”

Syria and its close regional ally, Iran, both are widely believed to have ballistic missiles capable of reaching Israel and other U.S. allies nearby, such as Turkey and Jordan.

Hezbollah, the Shi’ite militia backed by Tehran and fighting on Assad’s side in Syria, has tens of thousands of short-range rockets in southern Lebanon, near Israel’s border.

Many analysts predict that Syria and its allies will avoid a direct conflict with the United States and opt instead for an “asymmetric response” aimed at Western vulnerabilities – terror or cyber attacks, for example.

Assad also could opt not to respond to a strike, hoping to wait out the U.S. and allied military threat.

A U.S. official with experience in the Middle East said that Washington also is concerned that Iran could turn up the heat in Iraq. So far, resurgent violence by Sunni militants there has not been answered with retaliation from Shi’ite militias with ties to Tehran.

There are still militias in Iraq “that would respond most likely if the Iranians put pressure on them,” said the official, who is not authorised to comment publicly on the matter. “It’s something that’s of concern, and something that’s on everybody’s minds.”

The potential for retaliation by Syria or its allies is among the growing concerns in the U.S. Congress and elsewhere about President Barack Obama’s moves toward launching missile strikes against Syria in light of its apparent use of chemical weapons against civilians outside Damascus on Aug. 21.

Some lawmakers and analysts say they worry that Washington could be sucked into Syria’s 2-1/2-year-old civil war – something Obama has long resisted. Others argue that a few volleys of missiles aimed at Syrian military facilities would have little effect, and might even embolden Assad.

“It is vital we avoid shortsighted military action that would have little impact on the long-term trajectory of the conflict. We can’t simply launch a few missiles and hope for the best,” Senator James Inhofe, the top Republican on the Senate Armed Services Committee, said on Wednesday.

How Syria itself will respond will be key, although many analysts expect Assad initially will simply absorb any strikes as long as they do not appear intended to decapitate his government.

“I think the calculation will be, ‘Let’s just hunker down, take what we think will be a limited series of strikes and then just live to fight another day,'” said Shawn Brimley of the Center for a New American Security.

“I’d be surprised if Assad tried to respond because that would just further draw the United States into an engagement,” said Brimley, who recently served on Obama’s National Security Council staff. “He probably has the calculation that if the United States becomes decisively engaged that he’s unlikely to survive.”

Iran’s military chief of staff, Hassan Firouzabadi, was quoted by a state-run Iranian news agency on Wednesday as promising that “any attack on Syria would burn down Israel.”

Iran could turn to Hezbollah, however, to accomplish its goals.

“A Hezbollah attack on Israel is likely, and in fact some are speculating about yet another Hezbollah-Israeli war in Lebanon,” said Hayat Alvi, a lecturer in Middle East studies at the U.S. Naval War College.

“Iran and Syria can target coalition cyber-based infrastructure and other potential targets,” Alvi added. “They prove to be quite capable in that domain.”

A pro-Hezbollah religious leader, Sheikh Afif Nabulsi, warned on Tuesday that a U.S. strike on Syria “would be met by harsh responses against U.S. interests in the region and against Israel directly,” according to Lebanon’s Daily Star newspaper.

The group has sent thousands of fighters into Syria to help Assad quash mostly Sunni rebels, stretching its capabilities and sparking apparent attacks against it by Sunnis back in Lebanon.

“Hezbollah may say, ‘Actually, I don’t want to get sucked in further over Assad’s poor decision to use chemical weapons,'” said Matthew Levitt, author of a book on Hezbollah that is due to be released next week.

Iran, Syria and Hezbollah “are all inclined to do the asymmetric thing,” Levitt said.

Hezbollah’s most likely response, he said, will be to tell operatives already in the field who are planning violent attacks “to speed up.”