Stocks News- Kuwait Drops The Most In 3 Weeks - Gulf Business 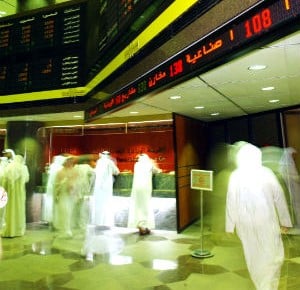 Kuwait’s bourse makes its largest one-day drop since Dec. 4 as retail investors cash out ahead of holidays.

The index falls 0.6 per cent to finish at 5,922 points. The market rallied 6.2 per cent from early November till Dec. 23, as bargain hunters and support from government buying lifted the market from eight-year nadir touched on Nov. 4.

“The market is totally driven by retails with no fundamental reasons,” says Fouad Darwish, head of brokerage at Global Investment House. “We don’t see any support from government buying in the last few days and that’s making some people nervous and are getting out of Kuwait 15 index.”

Kuwaiti investors tend to sell out of profitable positions ahead of holidays to book spending cash, Darwish adds.

The Kuwait 15 sub-index, down 4.6 points, is comprised mainly of bluechips and has been the recent target of state-linked buying. Expectations of government supporting the market have been high after reassuring comments of economic improvement from the government amid political unrest.

The ruler opened a new parliament last week, which was elected on Dec. 1 amid mass street rallies and an opposition boycott over a change to the voting laws that activists said favoured pro-government candidates.

Elsewhere, Oman’s index ends 0.1 per cent lower at 5,676 points, down for a second session since Sunday’s six-week high.

Small-cap Ajman Bank slips 0.7 per cent, easing away from a four-year intraday high. It accounts for a third of all shares traded on the market. The stock has rallied nearly 70 per cent in the last three months, on what traders say is speculation, so far unconfirmed, that institutions may buy a large stake in the bank.

Shares in Air Arabia shed 1.6 per cent, its second decline since Sunday’s 21-month high. Investors have been accumulating the stock on expectations of positive fourth-quarter earnings and dividends.

Abu Dhabi’s Eshraq Properties falls 2.4 per cent and Sorouh Real Estate sheds 0.8 per cent. Shares in Aldar Properties end flat. The trio account for two-thirds of all shares on the index.

The emirate’s index retreats 0.4 per cent to 2,629 points, losing for its first session in last six.

In Doha, the benchmark slips 0.1 per cent to 8,381 points, down for a third session since Thursday’s three-week high. It has lost 4.5 per cent so far this year.