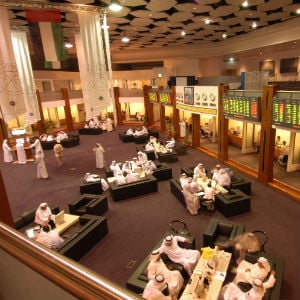 Kuwait’s bourse recovers early-session declines to end near-flat as investors buy stocks to boost share prices at the end of the first quarter.

This trading tactic, known by many brokers as “window dressing”, is especially rife in Kuwait, with investors seeking to temporarily bolster portfolio performance.

Selling pressure on stocks also eases as many companies file earnings on the final day of the reporting period. Shares in firms that fail to do so will be suspended from trading on Monday.

Logistics operator Agility rises 1.7 per cent to a three-year high. The firm said its fourth-quarter net profit more than doubled.

Elsewhere, UAE markets close mixed with Dubai’s bourse falling 0.9 per cent to a fresh two-month low of 1,829 points as investors book profits from an early-year surge.

Emaar Properties and Air Arabia decline 1.7 and 3.1 per cent respectively.

Abu Dhabi’s benchmark gains 0.3 per cent to 3,025 points. Shares in Ras Al Khaimah Ceramics surge 14.7 per cent after the company proposed a 20 per cent cash dividend.

In Oman, the benchmark falls for a third session since Tuesday’s 22-month high as investors sell stocks post-dividend.

The index drops one per cent to 5,990 points, its lowest finish since March 3.