Social Chain founder and BBC One’s newest and youngest-ever Dragons’ Den investor, Steven Bartlett, took to the stage in Dubai for a one-night-only event at Dubai Opera on Wednesday, March 2.

Steven Bartlett is represented in the Middle East by Motivate Talent – part of the Motivate Media Group.

An Evening With Steven Bartlett & Guests began with a fireside interview, wherein Bartlett was interviewed by Dubai-based serial entrepreneur and leadership trainer Spencer Lodge. Bartlett revealed details about his humble beginnings, the struggles he faced within his family that shaped his outlook towards business, and also how he grew his social media empire from scratch.

Bartlett, who is only 29, is widely considered as one of Europe’s most accomplished young entrepreneurs and thought leaders. He is the host of Europe’s No. 1 podcast on Spotify, The Diary of a CEO, and his debut book Happy Sexy Millionaire: Unexpected Truths about Fulfilment, Love and Success, became a Sunday Times bestseller. 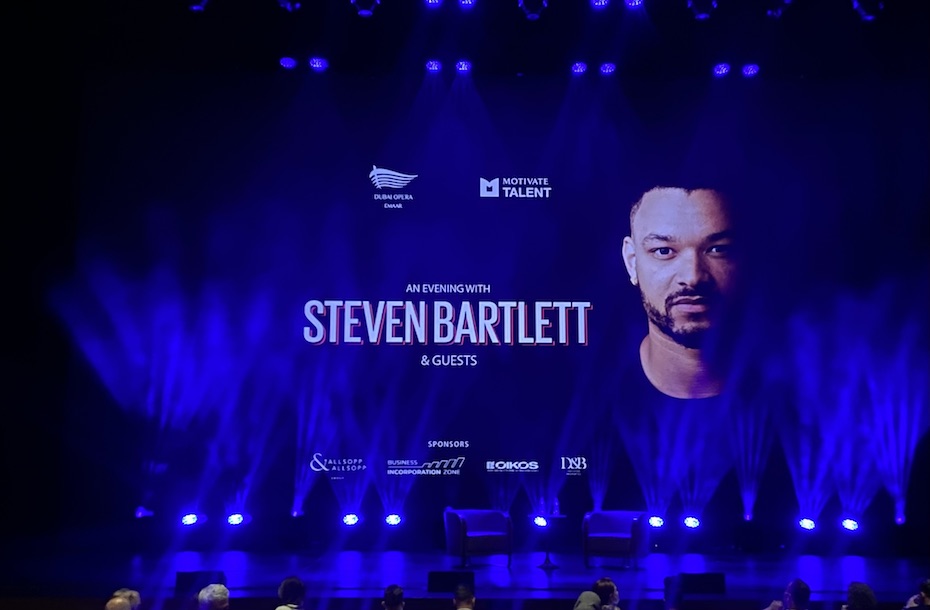 After the one-on-one interview with Lodge, Bartlett participated in a panel discussion with some of the region’s most influential entrepreneurs, moderated by Jane Withserspoon, the Dubai bureau chief at Euronews.

The panelists included world champion freestyle footballer Séan Garnier; Lewis Allsopp, the group CEO of Allsopp & Allsopp; Basma Ashry, general manager of Business Incorporation Zone; and Husni Al Bayari, chairman and founder of D&B Properties. Each of the panelists had a chance to pose questions to each other as well as Bartlett directly.

The evening ended, with a set of questions from the audience that were posed to members of the panel. One of the key takeaways from the panel discussion as well as the Q&A session was Bartlett reiterating the immense potential of Web 3.0 and how Dubai and the UAE can play a key role in attracting talent to the country to create unicorns within this space.

Commenting on the success of the event, Ian Fairservice, managing partner of Motivate Media Group, said, “It was our pleasure working with Steven and introducing him to the region. He is a brilliant entrepreneur who has played an instrumental role in inspiring an entire generation.”

Protecting data in the cloud: Whose responsibility is it?