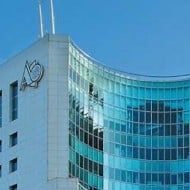 Ferguson, who has spent 28 years with the Asia-focused lender and held roles including head of south east Asia as well as Americas boss, will join ABC in the second quarter of this year as group chief banking officer, the statement said.

Shares in ABC were trading 10 percent higher, their maximum daily gain, on the Bahrain stock exchange at 0858 GMT.

ABC counts the Central Bank of Libya as its largest shareholder with a near-60 percent stake in the lender, with Kuwait’s sovereign wealth fund also holding around 30 percent, according to Thomson Reuters data.