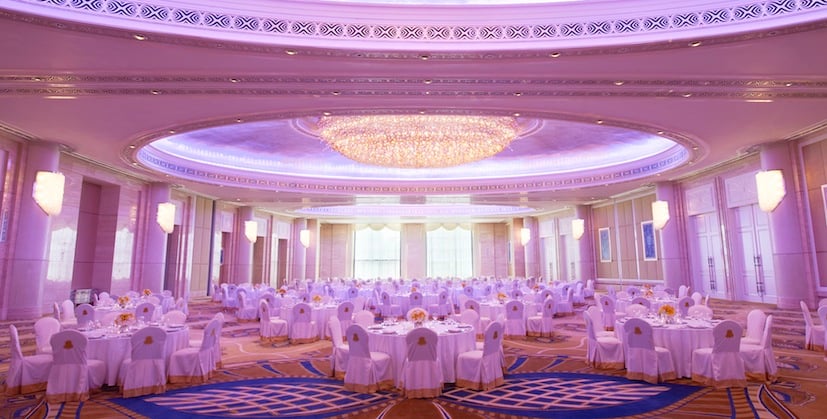 The extravagant Abu Dhabi Suite on the 49th floor is billed as the world’s highest suspended hotel suite – 200 metres above ground between the two Nation Towers – although along with the stretch of private beach across the road, accessed via a tunnel, it won’t be open immediately.

In all other respects the soaring 283-room property, which contains 55 suites, is ready for business. The hotel was designed by Hirsch Bedner Associates (HBA) in conjunction with local designers.

Eight culinary venues are available, spearheaded by Rhodes 44 from Gary Rhodes, and the man himself, who has been on site for the last six weeks, was busy preparing his team today. The St Regis Bar resembles a high-class library and contains UAE heritage artworks by Sergei Yatsenko while Villa Toscana serves regional specialities from Tuscany, Umbria and Emilia-Romagna and contains an attractive water-facing terrace.

On a media tour today, general manager Oliver Key said it expects the strongly Arabian-themed hotel to appeal primarily to GCC guests, with the strength of Starwood’s global distribution also likely to funnel through a steady stream of international visitors.

Despite the influx of five-star hotels, Key said he was hearing that the city’s hoteliers had been “pleasantly surprised” by business through the summer and Ramadan.

“I don’t think it will necessarily be a fight for business – it depends on your property and location, and with the mix of business we can attract, and leisure element, we’ve got a lot to offer. We’ll have attractive promotional rates for the first two or three months, and then we’ll set the rates according to the market. But with our butler service and infrastructure, we can’t go too low.”