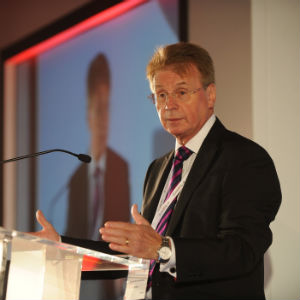 When people think of aerospace they generally think of manufacturing hubs such as Seattle and Toulouse – the founding cities of Boeing and Airbus. Very few would associate the UAE with such capabilities. But for Strata, the aerospace manufacturer wholly-owned by Mubadala, achieving such kudos forms a key part of its agenda.

“That is exactly what we intend to do,” says Ross Bradley, Strata chief executive officer. “A very large area of land has been designated for the creation of an aerospace park, and strata is the first company to be established on the park.

Plans are already well advanced to populate the area with a wide range of diverse aerospace businesses and most of these businesses come with partnerships from global organisations, where the technology will be transferred here. This concentration of activity is already attracting overseas investors in the aviation industry to become established in this area.”

Bradley says other factors contributing to Abu Dhabi’s attractiveness as an aviation hub is its global position, low cost of labour and tax regime. “Within six hours of flying time, almost two-thirds of the world can be reached. Secondly, the cost of our labour is less than that in Europe and the USA. The tax regime in this country is more supportive of industries, and Abu Dhabi is prepared to invest in high technology, capital-intensive sectors, such as aerospace. This is a much different situation than can be seen in many of Strata’s competitor nations.”

Reports in December showed that Al Ain-based Strata had around $2.7 billion, or Dhs9.91 billion, of work orders already secured from Airbus and other aircraft makers, including ATR of Italy, Alenia Aeronautica and FACC. And in November last year, it delivered its first composite flap track fairings for Airbus A330 and A340 aircraft.

Strata is on track to start phase two of construction in early 2012, providing additional manufacturing floor space at it’s planned 21,600 square km plant. But as developments progress, Bradley says the firm will adopt a “retail mentality” and take a “lean” approach to investment. He says: “Everything we do is lean so that there is no excess anywhere. All the time we’re looking at taking costs out and doing things better, and improving lead times. It’s not just lean on the shop floor; it’s lean in the finance area, lean in HR and lean in this office, so it is taking this lean approach like you would get in a supermarket, for example. A supermarket is not going to buy more bread than it will sell.”

Cementing its place in an already-over-crowded sector is a challenge Strata is ready for, according to Bradley. “The aerospace industry is a mature industry, and almost all of our competitors have been around for decades. These organisations tend to have established procedures and processes that make it difficult to introduce the changes that are needed in this increasingly competitive business. Consequently, the advantage that Strata has – because we are a new young company – is that we can implement from the beginning the best practice that we can find, both inside and outside the aerospace industry.”

This, says Bradley, “is attractive to the large aircraft manufacturers, because both Airbus and Boeing have experienced difficulties in their supply chain when delivering new generations of aircraft.”

Going forward, however, Bradley anticipates an influx of contracts from market heavyweights such as Airbus and Boeing.

“We are currently pursuing new business opportunities, and these big global aircraft companies are here for two reasons.

One – access to market. This country purchases a large number of aviation products, therefore access to market is important. Secondly – and this is what I think is more important – the aerospace industry is very mature and has been around for a long time. Barriers to entry are very, very high. So we are new. We are the youngest aerostructures company in the world and this gives companies such as Airbus and Boeing the opportunity in the design of a new business to put in place capability that will meet the performance standards that they require.”