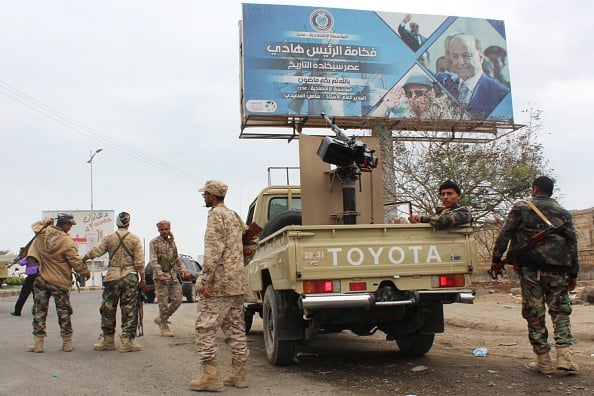 Three days of deadly clashes between southern Yemeni separatists and an internationally recognised government based in the port of Aden subsided on Wednesday after fighters handed back two military bases they had seized, residents said.

The detente followed mediation by a Saudi-led military coalition, which is trying to halt the worst infighting yet among its allies in a wider war against the Houthi movement that controls northern Yemen, including the capital Sanaa.

The separatists aim to restore the independent state of Southern Yemen, which united with northern Yemen in 1990. They have fought alongside forces of the government of President Abd Rabbu Mansour al-Hadi, but rose up this week and seized control of Aden after Hadi refused to sack his prime minister.

Separatist military units gained full control of Aden on Tuesday with the exception of a fortified presidential palace housing the prime minister’s cabinet. But the fighters ceded two bases later on Tuesday.

“Government institutions were handed back and the (southern) militias withdrew,” a government source told Reuters.

Residents reported that banks and businesses reopened on Wednesday as traffic resumed on the streets after many people spent days indoors fleeing from combat which killed at least 20 fighters.

The separatist leader Aidaroos al-Zubaidi, speaking on Tuesday to France 24 Arabic TV, said his side remained loyal to Hadi and had no plans to quit the battle against the Houthis.

“We’ve asked the president … to fire the government and appoint a caretaker government in its place,” Zubaidi said. “We ask the Arab coalition to take control and assume its duty to this people and these bad conditions.”

The conflict has pushed Yemen, already one of the Arab world’s poorest countries, toward humanitarian collapse as hunger and disease spread.

The UN refugee agency (UNHCR) said on Wednesday that the latest fighting had hindered access to people in need.

“UNHCR emergency aid distributions and humanitarian assessments planned this week for vulnerable, displaced Yemenis have now been postponed and UNHCR humanitarian cargo remains at Aden port unable to be released,” the group said.