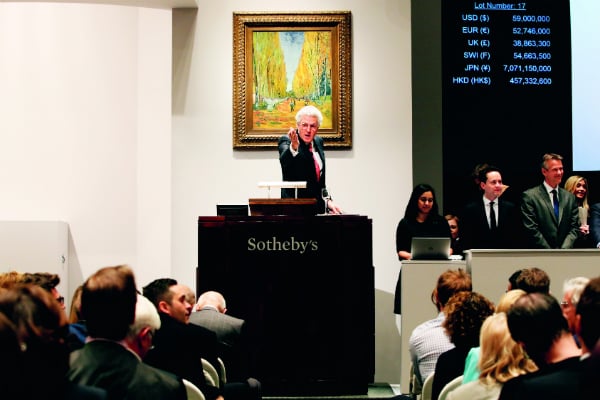 International auction house Sotheby’s plans to open its first gallery in Dubai as part of efforts to capitalise on demand for Middle Eastern art coming from the region.

“Over the last five years we have seen that the number of clients participating in our global sales has more than doubled, and the spending by these clients has nearly tripled,” said Edward Gibbs, senior director and chairman, Middle East and India.

“By expanding in the region we are seeking to serve our clients as best as we can,” he added.

Sotheby’s, which has offices in Doha, Istanbul, Egypt and Mumbai, has begun hiring staff for its office in Dubai.

The company has recorded 16 per cent year-on-year growth in the region and enjoyed a 46 per cent increase in spending by regional clients at its global auctions.

In the UAE in particular, the auction house has recorded a significant 147 per cent increase in sales with demand driven by products such as watches, jewellery, contemporary and modern art.

“The economic crisis has curtailed the crazy spending we’ve seen five and six years ago. But the savvy collectors are cautious and don’t mind spending on art that is rare, fresh and of museum quality,” said Ashkan Baghestani, head of Sales and deputy director of contemporary and modern Arab Iranian art.

There is a large interest in modern art among the younger generation from the region.

“The modernist movement is only now being recognised. Modern art has been undervalued and not appreciated until now and so there is a lot of room for growth. Middle Eastern art is considered as an emerging market internationally,” he said.

The company also said it witnessed strong interest for art emerging from its online platform.

The number of clients from the Middle East registering to bid and buy online has almost doubled. “There was a 30 per cent increase in online billing last year,” Gills revealed.

He emphasised the importance of educating clients on the subject of art.