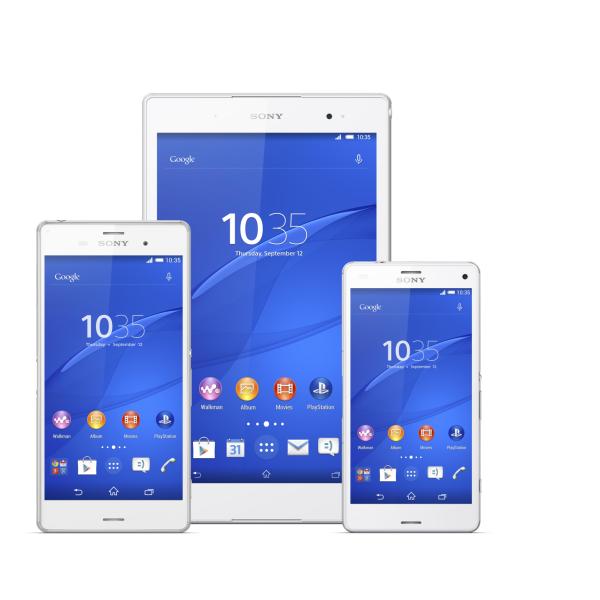 Japanese device manufacturer Sony Mobile has revealed its latest round of devices in time for the IFA technology show in Berlin, including new additions to its premium and mid-end smartphone range and its tablet lineup.

The device manufacturer has opted for a six month upgrade cycle on its devices, as opposed to the yearly cycles of competitors Samsung and Apple.

The Xperia Z3 compact is designed for one-handed use, with similar specs to the Z2 but in a smaller 129g and 8.6mm thick design, featuring a liquid reflection frame and tempered glass panels.

Improvements come in the camera, which is still 20.7 megapixels, but now features a 1/2.3 Exmor RS for mobile sensor, BIONZ for mobile processing engine, new 25mm wide-angle Sony G Lens and improved steady shot mode. The device’s processor is also slightly upgraded, now a 2.5GHz Snapdragon 801 Quad-core chip as opposed to the 2.3GHz processor in the Z2.

Sony is also launching the similar spec Z3 Dual, a slightly heavier 152g device with a 7.3mm aluminium frame and dual sim functionality, and the Z3 Tablet Compact, a 6.4mm thick, eight-inch tablet with what is expected to be a lower megapixel rear camera and stainless steel corners.

The devices are the first in Sony’s line-up to allow users to play Playstation 4 games anywhere in their home through a Remote Play application and game control mount.

The manufacturer is also upgrading its wearables lineup with a new Android application called Lifelog, that enables users to set and achieve goals and bookmark memorable moments, and two new devices.

The waterproof SmartBand Talk features a 1.4 inch e-paper display and built-in microphone and speaker, enabling the user to make and receive calls and issue voice commands, as well as a built in accelerometer and altimeter sensor for measuring physical activity.

Sony’s second wearable addition is the SmartWatch 3, set to only be available in selected markets. It is the manufacturer’s first device specifically designed for the latest Android Wear updates introduced by Google, and features an accelerometer, compass, gyro, and GPS sensor in a stainless steel body.

No information was given as to the Middle East release date of any of the devices, but the previous Z2 line reached UAE and Saudi Arabian stores around two and a half to three months after it was announced at Mobile World Congress in February, with a release date of May 19.