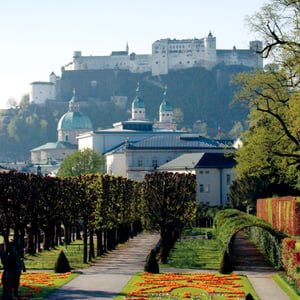 If you took a Mozartkugel and rolled it down a Salzburg street, that’s pretty much how far you’d be able to walk without tripping over the town’s most famous son or The Sound of Music. Now Wolfgang Amadeus Mozart is a composer I know and love, but so far I’ve managed to avoid watching that musical. Apparently so have most Austrians, but it is compulsory viewing if you’re studying tourism.

Mozart and The Sound of Music combine into a powerful tourist attraction. But reducing Salzburg to just two things would be doing its 150,000 citizens a great disservice. Or maybe you should make that 520,000 people, as Salzburg can refer to both the town and the federal state. Confusing? Wait until you hear this. Mozart was actually not Austrian as Salzburg was an independent sovereign state when he was born. Only 15 years after his death did Salzburg become part of Austria.

Salzburg is a picturesque city lovingly cradled between the 1,972-metre Untersberg, the closest Alpine peak’ and two smaller mountains, the Monchsberg and Kapuzinerberg. The Salzach river meanders through the town bisecting the, ‘Alstadt’ (Old Town) that is dominated by baroque towers, churches and the impressive Festung Hohensalzburg, one of Europe’s largest medieval castles. Salzburg’s famous baroque architecture largely survived World War II intact and it was listed as a UNESCO World Heritage Site in 1997.

The Alstadt is fairly compact, which means you can explore it leisurely on foot. As luck would have it, it is here were most of the attractions are found. And thanks to the mountains and river, navigating is fairly easy. One thing you should have is the Salzburg Card (25 euros for 24 hours) that gives you one time free entry to the city’s attractions, allows use of public transport and gives discounts on cultural events and several trips and outings.

I stayed at the five-star Sheraton Salzburg (sheratonsalzburg.com), situated right next to the famous Mirabell Palace and garden, within easy walking distance of the Altstadt. And it is in the Mirabell garden that my Salzburg experience started on a sunny day aided by Heidi, a super efficient and highly knowledgeable tour guide who clearly loves Salzburg.

The history behind the Mirabell Palace would do any soap opera proud with its tales of bishops, princes, mistresses and intrigue. The palace garden is also stunning, a fact that wasn’t lost on Hollywood as it is here where Maria (Julie Andrews) and the children danced and sang ‘Do-Re-Mi’. Barely had Heidi finished imparting that nugget of wisdom when, I kid you not, the sounds of ‘Do-Re-Me’ filled the air. The source of this impromptu musical interlude turned out to be some happy schoolgirls on an outing.

We carried on meandering along the Salzach river’s right bank through the ‘modern’ Old Town, so called because it is a few centuries younger than the Altstadt – age is fairly relative in Salzburg. Heidi was full of interesting facts, but the most fun one was when she pointed out gauge marks on the buildings at the entrance of the narrow Steingasse. Apparently an American tank crew during WWII tried to get their tank to a ‘house of ill repute’ a little further down the road and promptly got stuck. The Salzburgers, being humorous people, have steadfastly declined to renovate this interesting conversation piece. Or maybe it is simply the knowledge that more than one army has left its mark on the city’s history.

As most of the major tourist sites are found on the left bank, we crossed the Salzach on the Mozartsteg pedestrian bridge, which landed us right in Mozart Square at the feet of Mozart’s statue. Heidi pointed out the throngs of Japanese tourists who, she explained, have a special affinity for his music.

Heidi, with Teutonic efficiency, made sure that the Residenzplatz (another Sound of Music location), Old Residenz Palace, the Festival Hall Complex, Mozart’s Birth Place and Mozart’s Residence were all covered. As was the Kapitelplatz, which features the 2007 ‘Sphaera’ sculpture by Stephan Balkenhol that consists of a 10-metre-tall yellow ball with a man on top of it. The Salzburgers, naturally, call it ‘Mann auf Mozartkugel’.

While it is great to be able to tick off all these sights, there is the danger of getting historical and cultural overload. So my advice is to take it slow, absorb the baroque architecture and maybe throw away your map. The Altstadt is so compact that even aimless wandering will get you were you want to be.

The Grunmarkt on Universitatsplatz, for example, is an explosion of fresh fruit, smoked meats and tourist knick-knacks. Salzburg was briefly part of Bavaria, and some of that famous Gemutlichkeit, an agreeable and friendly way of doing things, seems to have stayed on (Some historians claim that Mozart always referred to himself as being German, but let’s not go there). So make like a real Salzburger and hit the nearest sausage stand for a wurst with mustard.

Then take a leisurely trundle to see the Salzburg Panorama, which is housed next to the New Residenz. This unique city panorama by Johann Michael Sattler (1786-1847) covers 125 square metres and depicts the historic centre of Salzburg and its surrounds in 1829. Comparing it to Salzburg today, it becomes clear that the Altstadt is little changed. Americans should definitely also go if they want to see what Manhattan (New York) looked like in the 1850s.

Understandably, cemeteries do not feature on most people’s holiday plans, but St Peter’s Cemetery is worthy of a visit as the oldest gravestone hails all the way back to 1288. Mozart’s sister is buried here, as is Paul Furst who invented the Mozartkugel and started a whole confectionary craze. And yes, it is in this graveyard that the Van Trapp family hid from the Nazis.

From the cemetery it is a short walk to the Festungbahn (Funicular), which takes you up to the Hohensalzburg Fortress. The view of Salzburg is stunning from the top and you can follow a path (around 1.2 kilometres) to The Museum der Moderne Salzburg. This museum for modern art is situated on the Monchsberg and has an elevator that basically lands you at the beginning (or the end) of the Getreidegasse, Salzburg’s most famous shopping street. By the time you’ve finished with the throngs of people and shopping in the Getreidegasse it will be time to sit down somewhere, have a coffee, and reflect on the duality of Salzburg.

Salzburg’s marketing team has been blessed with Mozart and The Sound of Music, but even without these the city would be worth visiting for its beautiful location, architecture and history. New sits next to old comfortably, with modern clubs adjacent to ancient pubs, traditional restaurants complementing modern cuisine and ancient squares housing modern art. There’s a reason why Dietrich Mateschitz – the famous Austrian entrepreneur, billionaire and co-founder of Red Bull – calls Salzburg home.