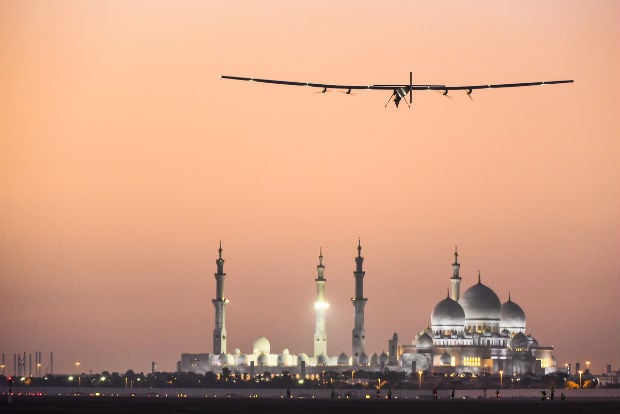 Solar Impulse, the first solar powered flight attempting to fly around the world, has been forced to land in Japan due to bad weather.

Abu Dhabi clean energy company Masdar is the host partner for the flight and hosted Solar Impulse during the reassembly of the plane and the final flight preparations.

The flight was enroute to Hawaii from Nanjing in China as it aimed to cover almost 5,079 miles (8,174km) without any stops. If successful, the five-day journey would have been the longest solo flight of an aircraft.

However, the plane would have needed perfect weather to complete this stretch of the journey in a single attempt.

The craft, which is covered with 17,000 solar cells, required clear skies to let the sunlight filter through to its cells and store up the energy for its night time flight.

In addition it would also need to have favourable winds to propel the aircraft.

But the pilot was forced to make a stop in Nagoya due to worsening storms, the team said in a statement.

Solar Impulse pilot André Borschberg tweeted:” On my way to Nagoya, disappointed for not continuing but very thankful to the Japanese authorities for their support.”

If the plane had been unable to land at the nearest airport, the pilot would have been forced to eject by using a parachute. If the pilot remained in the plane, then he might have faced the possibility of being electrocuted if it touched the water.

The team is now reportedly waiting for stable weather to resume the solar-powered flight’s journey.

Solar Impulse 2 took from Abu Dhabi’s Al Bateen Airport on March 9 and has travelled to countries such as Oman, India, Myanmar and China.

The craft is now proceeding towards America and then has to cross the Atlantic before the hurricane season peaks in August.

There are concerns that this slight delay could push back the schedule of Solar Impulse 2.