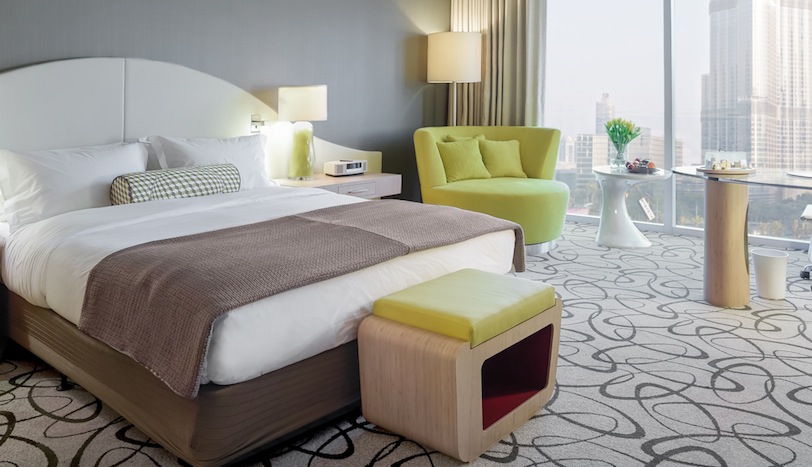 Accor has opened its third Sofitel hotel in Dubai today, located in the shadow of Burj Khalifa, and close to Dubai Mall and the city’s financial district.

The 31-storey hotel is next to a 48-floor office and residence tower and, similar to the JW Marriott Marquis Dubai, accessed from the back rather than the front, which overlooks Sheikh Zayed Road.

All 350 rooms feature spacious marble bathrooms, deluxe French amenities such as Lanvin and Hermes along with Sofitel’s MyBed – and all-feather bed and light duvet, free wifi and Nespresso coffee machine.

Accor intends to position the hotel as “an oasis of art” which will blend Victor Vasarel-inspired Op Art with Sofitel’s French culture.

“I think we have one of the best locations in town – directly off Sheikh Zayed Road, next to the Metro station, and virtually connected to the Dubai Mall and Burj Khalifa,” he said. “From the Metro you are connected to all the stops nearby, DIFC, and the airport is 18 minutes away.”

Classic rooms start from 45sqm and the 76 suites offer panoramic views of either the world’s tallest tower or the coastline (classic room pictured). “Every room has a view – we anticipated that most people will want a Burj Khalifa view but when we had agents through, there was split opinion.”

Classy leather fixtures and a ‘bubble’ floor design give the lobby a novel look, with three stand-alone reception desks and concierge desk to the left. Corridor carpets have bright, swirling colours.

The stand-out feature is a vast, seventh-floor pool deck which features a 62-metre infinity pool, with abundant function space that can hold up to 3,000 people for cocktail receptions, and affords striking views of Burj Khalifa. One suspects it will be a hot venue for New Year’s Eve.

F&B options include French-inspired meats in The Green Spices and The Red Grill, Open kitchens at Les Cuisines (all-day international dining) and the Lobby Patisserie. The top-floor 31st Bar will be a striking place for cocktails and the Op Art Lobby Bar will be a pre- or post-meeting spot, or starting point on a night out.

The Sofitel So SPA and So FIT feature a full range of equipment, treatment rooms, two hammams with private baths, scrub and deep relaxation room, dry sauna and steam room.

MICE will be a key component with 14 meeting rooms and a 600-person ballroom containing a carved wood ceiling that recalls traditional piroques, complemented by modern sound and video systems and full-service business centre.

A special discovery rate is currently priced $258. A function will be held on Monday night to promote the hotel during the Arabian Travel Market.