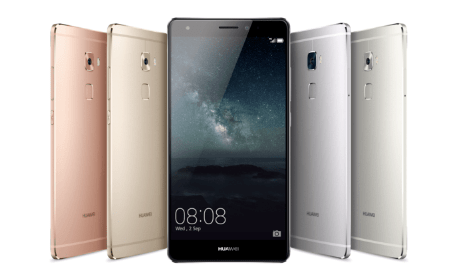 The Mate S was revealed in September to some fanfare. Just days before the launch of the latest iPhone, Huawei took Apple head on announcing its own device with the 6s’ pressure-sensitive force touch technology

However, it would be fair to say that force touch is far from a reason to buy the Chinese manufacturer’s new device. For one, it is only available on the more expensive 128GB version. But perhaps more importantly, the functionality is limited to weighing small objects and zooming in on photos rather than quick glances at emails or app shortcuts seen on the new iPhone.

Even disregarding the feature though, there is plenty to like about Huawei’s latest device.

Huawei has clearly been paying close attention to its smartphone design in the last year and this is shown in the build quality of the Mate S. The all-metal unibody gives the smartphone a smooth premium look, while the curved rear means it fits snugly in the hand despite the 150x75mm dimensions. This is not to say that it feels clunky. In fact, it is one of the smaller 5.5-inch-display devices on the market at launch.

The 1080p AMOLED display itself offers a clearer and more colourful visuals than some competitors, even if their 2K and 4K screens outmuscle it. However, we did encounter a few visibility issues in bright conditions.

In terms of hardware, the device’s overall performance is speedy – as expected with any new premium smartphone these days – thanks to the 2.2GHZ octa-core processor and 3GB of RAM. There is little no slowdown switching between apps or browsing the web. Indeed, only the most hard-core users will notice the very slight difference in performance compared to Samsung’s Galaxy S6 line.

More obvious though is Huawei’s Emotion user interface. Users will either love or hate the lack of an app tray and settings and notifications tabs compared to stock Android. Although it should only take a few days to get used to.

Outside of force touch, the device’s other differentiators include a fingerprint sensor and KnuckleSense. The former, located on the rear of the device, is genuinely useful for unlocking the phone and can even answer calls, stop alarms and pull down the notification menu. Those that like the odd selfie will also be pleased to hear it can be used to activate the camera, meaning no more reaching to touch the screen. KnuckleSense in comparison feels a little unnecessary. Swiping the screen with your knuckles in certain shapes can be used to take screenshots or open applications. Yet in practice it is far quicker to just do so normally with your fingers, not to mention less awkward if there are people around.

Other highlights include the device’s 8MP front camera with flash, meaning dark selfies will become a thing of the past. Although the colour reproduction and definition of both this and the rear 13MP shooter is far from market beating.

The battery life is also nothing exceptional – and cannot be replaced with a backup due to the unibody design choice – but it should last the day with moderate use.

However, where the Mate S does fall short is its price point. At Dhs 2,000 to Dhs 2,300 and above in the United Arab Emirates, the device is touching on new Samsung Galaxy and iPhone territory where it does not compare favourably. Huawei’s Honor 7 also has similar technical specifications for a more budget-friendly Dhs 1,399.

This point aside, it is a solid device and a sign Huawei is heading in the right direction.