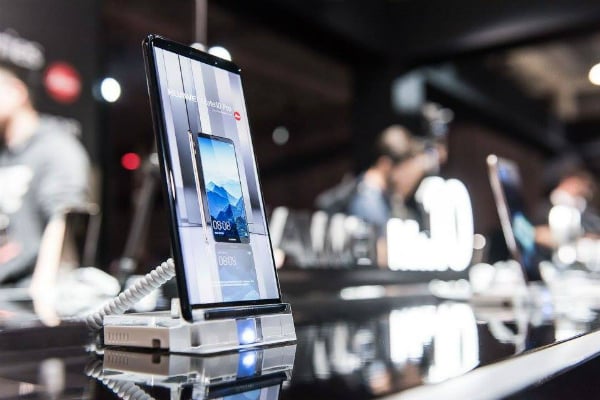 Following new releases from Apple and Samsung it is Huawei’s turn to enter the rush for end of year sales with its Mate line.

For those unfamiliar with the Mate devices, the focus is very much on power users with the pro variant in particular catering to those that want top specifications in a phablet-sized package.

At first glance there are many of the things you can expect from a flagship device these days.

Dominating the front is a six-inch OLED display with the thin bezels that have come to define top-end smartphones this year. The aesthetic is perhaps a little generic on the screen side but makes more of a statement on the rear with an easy to hold curved glass design and a metallic layer visible underneath.

The back is where you will also find a reliable fingerprint scanner on the pro variant, with the standard Mate 10 boasting the sensor on the front. Another noticeable difference between the two is the lack of a headphone jack and SD card slot on the pro, which Huawei has done away with to introduce water and dust resistance. This may displease some users with expensive headphones or high storage needs but didn’t bother me given the included adapter and 128GB of internal storage.

Among the key selling points for the line this year is Huawei’s new Kirin 970 chipset, which has an on-board AI processing unit claimed to offer better speed and energy efficiency. Day-to-day usage is silky smooth whether you are flicking between multiple apps, watching a series on Netflix or gaming. The pro variant comes with 6GB of RAM as opposed to the regular’s 4GB and should prove a workhorse when it comes to productivity. A longer term question will be the impact of the AI chip, which in theory means the device will offer the same performance a year from now.

Other highlights include the latest version of Google’s Android operating system, Oreo, out of the box – with Huawei’s EMUI on top. A new addition among the included Huawei apps is a translator utilising the on-board AI chip. This can be used to translate text on pictures taken by the camera and proved somewhat effective for understanding menus written in German, but unfortunately it doesn’t work with Arabic for now. There is also a desktop mode that allows the device to be plugged into a monitor to act as a PC for PowerPoint presentations or word processing and a split screen mode to take advantage of the phone’s larger display – all useful in a work context.

The screen itself has been the subject of some debate at launch because the pro variant has a lower resolution than the regular Mate 10 and other competing Android devices. Whether this makes a difference to you may depend upon what smartphone you are replacing. If it is one from last year you will more than likely notice a positive difference with the pro’s OLED but more recent releases may offer more detailed visuals.

The slight reduction in pixels per inch does have one key advantage, however, in using less battery power than competitors. Combined with the larger (4,000mAh) cell included it leaves others in the dust when it comes to longevity, lasting a full two days with 20 per cent to spare during testing with moderate usage. When it is time to charge you can also be sure it won’t take long with the fast charging cable coming close to the nearly 60 per cent top-up in half an hour promised.

This finally brings us to the cameras, which continue Huawei’s partnership with German optical firm Leica. New features on the dual rear camera include 2X lossless zoom and a wider aperture, with the latter providing better low light performance. Shots in general are great quality with crisp colours and no slowdown between taking one photo and the next, meaning the front or back camera is unlikely to disappoint. As an added bonus, the on-board AI also recognises when certain objects are in front of the camera to automatically alter its settings and there is no shortage of modes from wide aperture where you can alter the depth of field to portrait ‘bokeh’ effects and motion capture.

All in all the Mate 10 Pro is a great productivity device that delivers in several areas. As mentioned, the main sticking point for some users will likely be the display and the lack of a headphone jack, but the battery life is hard to beat.

The Mate 10 Pro will be available at the end of November from Dhs2,999