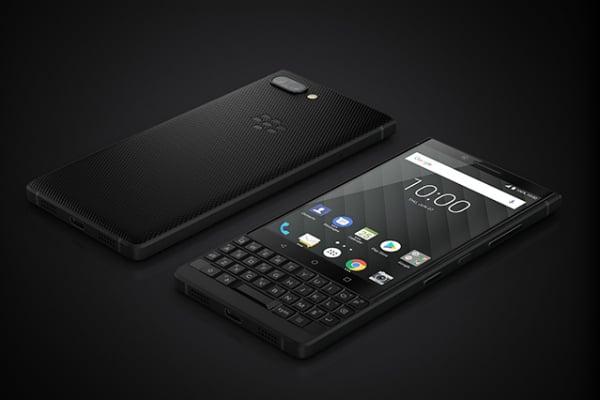 I have to admit when a box containing a Blackberry Key2 arrived on my desk I was excited.

Blackberry was the brand that brought me into the smartphone market more than a decade ago and I still have fond memories of my last device from the manufacturer, a Bold 9900, which is gathering dust in a drawer somewhere.

A lot has changed since then with Blackberry itself (formerly Research in Motion) pulling out of the smartphone game entirely to focus on its software and services business.

Instead it is China’s TCL now producing Blackberry branded devices under a licensing deal that has generated some interest to date, with the touchscreen/keyboard combo KeyOne a hit in the Gulf.

Building on this success is the Key2, which features a similar design with a physical keyboard and touchscreen combo.

TCL says the main target audience is people that use their smartphone for communication and work as opposed to gaming and multimedia and it’s easy to see why.

All that space taken up by the keyboard means the screen itself on the not insubstantial device is a relatively small 4.5 inches in a market where close to 6 inches is rapidly becoming the norm.

But is sacrificing screen space for a keys worth it? The answer is likely to depend on the person.

Out of the box it is clear that the Key2 is not a device necessarily aiming for the mass market. The design appears somewhat blocky with a metallic rim and is certainly more functional than fashion statement with a texturised rear.

The keys themselves are 20 per cent larger than on the KeyOne but still feel fiddly at first and take a bit of getting used to. In particular the size and positioning of the keyboard in relation to the display means you may have to adjust how you hold the device in comparison to a regular smartphone. I also found myself often getting stuck when it came to finding the right punctuation symbols to begin with but over time this became less of an issue.

After getting past initial setup, I was pleasantly surprised at the way in which TCL has made the Key2 stand out in more than just physical appearance from your standard smartphone.

There are enough useful brand specific apps and tools to ensure it feels like a genuine Blackberry experience including old favourite the Hub, which combines emails, appointments, texts and other messaging services into one display that is always just a flick from the right side of the screen away.

Other worthy mentions include the privacy folder, which is an area where you can lock away selected files and photos under password or fingerprint protection so the next person you hand your device to can’t view something you don’t want them to (probably useful if you have a nosey spouse).

And then there is DTEK Security, which automatically monitors the operating system and lets you know of any risks to your privacy like apps accessing your camera or contacts without your knowledge. All relevant given the privacy scandals this year.

However, I personally didn’t see much use in bundling in Blackberry Messenger (who still uses this?) and the Privacy Shade, which allows you to cover all but a snippet of the screen to prevent the person next to you from taking a peak.

Other unique features include speed key combinations, which allow you to quickly skip to an app with what is essentially a keyboard shortcut. After playing around with these I can certainly see them saving time but couldn’t help but feel a lot of users wouldn’t bother.

The OS itself is Android Oreo, meaning unlike the Blackberry devices of yesteryear you can access the full Android app library, and TCL is promising an upgrade from Oreo 8.1 to P at a later date.

While undertaking work related tasks, like emails, browsing or word processing, the Key2 is in its element and the upgraded internal specs including Qualcomm SDM660 processor and 6GB of RAM mean slowdown is almost non-existent. The battery should also last you into a second day without too many issues and there is enough internal storage space (64GB/128GB) combined with a dual SIM/Micro SD slot to save all of the attachments you need.

Another upgrade from the KeyOne to the Key2 is a dual 12MP lens rear camera for improved photo taking potential. The camera feels speedy and should be fine for taking pictures during a conference, event or even a quick profile picture with the portrait mode but is nothing exceptional. Some of the more unique features include a business card scanner that can upload the data to your contacts and the ability to hit the space bar to save pictures straight to the previously mentioned privacy folder – both useful in the right situation. The experience with the 8MP front camera is similar and combined they should be more than capable of meeting your video conferencing needs.

However, video calls and other visual tasks like watching YoutTube clips and gaming also reveal the shortcomings of the smaller display. Although the device is not designed as a multimedia powerhouse, it is hard not to feel that the viewing area (and somewhat strange 3:2 aspect ratio) could have been expanded for a better experience given the quite substantial bezels and an unnecessary off-screen bar for the Android buttons.

Over time, I all too often felt like the physical keyboard was not necessarily adding enough to justify the sacrifice in viewing space even with the addition of touch controls for scrolling and predictive text for an arguably superior experience than that seen on the Blackberrys of old.

Unlike a touchscreen board it’s always there even when you aren’t using it, while advancements in predictive typing and autocorrect have minimised many of the advantages physical key devices may have once had in terms of accuracy and typing speed.

Add to this the often-unreliable fingerprint scanner on the spacebar and I soon snapped out of my nostalgic longing for a keyboard. Although there will no doubt be others who prefer the physical feedback or just want a device that stands out from the crowd.

All in all these issues make it hard for me to recommend the Key2 as a default device but as a secondary work phone there is certainly potential.

However, based on my experience I would definitely take some time to test out the keyboard before you buy as in my case the expectation did not match the reality.