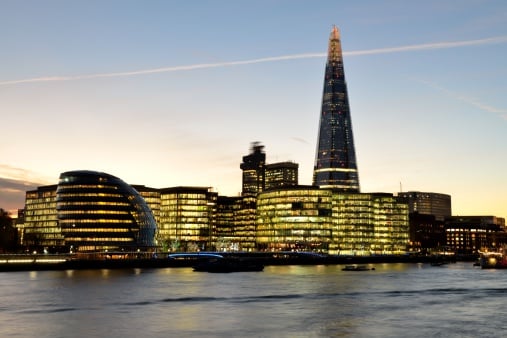 Western Europe’s tallest skyscraper, the Shard, built by Qatar’s royal family, is now 50 per cent let a year after its opening – a sign, analysts say, of an improving office rental market.

Six new tenants mean that eight of 26 floors of offices in the tapering glass tower will be occupied this year, the Shard’s real estate managers said on Thursday. Its 13 floors of apartments have yet to be offered to potential residents.

New York-based investment bank Duff & Phelps, an intellectual property law firm, a venture capital group and an energy company are the other tenants.

It stands beside by a smaller office block called The Place, also designed by Piano, which will host media tycoon Rupert Murdoch’s News Corp.

Restaurants Oblix, Aqua Shard and Hutong moved into the tower last summer, and its top floors are reserved for visitors who can pay 30 pounds ($50) to see the highest view of London. From May, the Shangri-La Hotel will occupy floors 34 to 52.

The elongated pyramid competes for business with other skyscrapers such as the “Walkie Talkie” and the “Cheese Grater”, nicknamed for the silhouettes they cast on the skyline.

Although developer Sellar Property Group has struggled to attract tenants, Qatar is ploughing on with the expansion of its London property empire and the 2 billion pound ($3.3 billion) development project next to London Bridge station.

Only last month it announced plans to build a 27-storey residential tower next to the Shard.