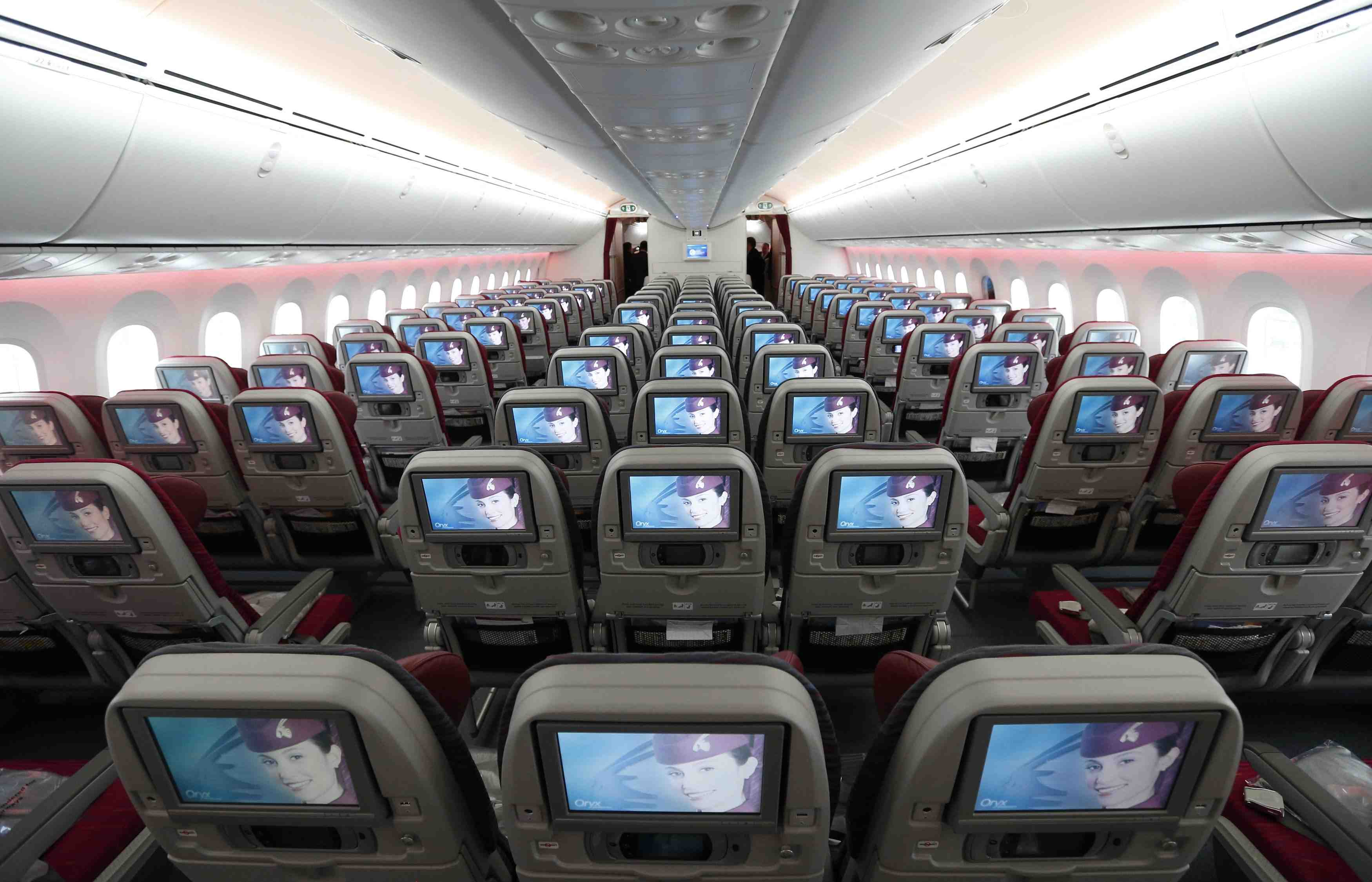 Passengers in business and first class have arguably enjoyed the biggest overhaul in aircraft seating in recent years. Fully flat bed designs, and now three-room suites in the case of Etihad, are bringing new levels of comfort and space to high paying flyers.

But in economy, with the exception of new entertainment systems, and perhaps better cushions and headrests, the passenger experience has largely remained the same, and could be worsening, according to reports.

This lack of innovation has not gone unnoticed among airlines. Plane manufacturers and designers have all presented their ideas for the future of economy seating in recent years, although many reflect where airline priorities lie when it comes to lower cost flying.

If economy passengers have noticed their seats seeming smaller than before on long haul routes it may not just be from one too many snacks before take off.

A report last year by the Wall Street Journal found that big carriers including American Airlines, Air Canada, Air France-KLM and Emirates were bringing the short haul standard seat width to long-haul flying by cramming an extra seat into each row.

For almost 20 years, the standard setup of the Boeing 777 was nine seats per row, but 70 per cent of Boeing’s biggest version of the plane delivered in 2012 included 10 abreast seating, up from just 15 per cent in 2010, the report found.

Meanwhile, 90 per cent of airlines that bought the 787 Dreamliner selected nine-abreast seating in economy over eight-abreast.

Planes from rival Airbus were also not immune, with 10 airlines found to fly Airbus A330 jetliners with nine 16.7-inch width seats in each row, rather than the eight it was designed for.

This trends reverses decades of seat width growth in economy, and could be a sign of where the industry is heading, at least in the short term.

The standard seat width for long haul flying increased to 18 inches in the 1970s and 80s with the 747 jumbo and first Airbus planes, jumping to 18.5 inches in the Boeing 777 and A380 superjumbo.

This difference has led to some sabre rattling between the manufacturers, with Airbus even going as far as commissioning a study at the end of last year from the London Sleep Centre, as part of its call for airlines to set a minimum 18-inch seat width standard for long haul flights.

The research conducted by having six healthy adults complete a series of “night sleeps in flight simulations re-creating [the] long-haul economy passenger experience” with all variables kept constant except seat width, which was changed from 17 to 18 inches.

The wider seats were found to improve sleep quality variables by up to 53 per cent, with Airbus stating it maintained a standard 18-inch minimum seat width in its long-haul economy cabins.

“We are however seeing a trend that especially on full service long haul, new generation jets from the competition have smaller seats in economy,” says Hmkova.

In contrast, rival Boeing is quick to point out that the ball is in airlines’ court in deciding how much comfort to offer passengers.

“We design our interiors to give our airline customers the flexibility to offer their passengers the right combination of comfort and value,” says Marty Bentrott, vice president – sales, Boeing Commercial Aeroplanes for Middle East, Russia and Central Asia.

Debates aside, reserving the right level of comfort while maximising airline revenue is the ideal combination, for airline seating, according to Airbus’ Hmkova.

Bearing this in mind there have been a series of radical designs proposed by the manufacturer in recent announcements and patent filings.“Whilst many patents are filed each year, not all come to fruition.

This is common for innovative companies, although of course we hope these innovations are implemented and do become the norm,” she says.

In December 2013 Airbus filed a patent application for a seat design resembling a bicycle seat mixed with an office chair, with a small back rest, two small arm rests, and the ability to fold up and down when not in use like cinema or stadium seats.

The design would position the passenger in a semi upright stance, reducing the required legroom between rows at the expense of some passenger comfort, the manufacturer admitted.

“However, this reduced comfort is tolerable for passengers in as much as the flight lasts one or a few hours,” the airline said.

Another patent filed in April 2014 proposed an arguably even more radical seating scheme, doing away with seat rows altogether in a circular design described by the Financial Times as a “flying doughnut.”

In the application, Airbus says that traditional aeroplanes, where passengers sit in rows in tube like structure, have a design flaw, in that a lot of stress is placed on the front and back when the cabin is pressurised.

This requires reinforced frames, which reduce the number of passengers airlines can fit in.

The manufacturer theorises that the redistributed pressure with a circular cabin in an aeroplane design that resembles a stealth bomber, would allow airlines to fit even more paying passengers on the aircraft. Some reports however theorised that sitting in a different direction to the one the plane was moving could cause motion sickness for some passengers.

Airbus has also shared its vision for how aircraft cabin and aircraft designs might radically change in the longer term.

Driven by the philosophy “inspired by nature” the concept cabin is based on bionic principles to deliver aircraft cabins optimised to the needs of individual passengers, according to Airbus.

Technologies envisioned for the concept include fittings and furnishings able to clean and repair themselves thanks to self-healing covers and dirt repellent coatings, while traditional travel classes would no longer apply.

“First, Business and Economy class are replaced by zones that target more individual needs like relaxing, playing games, interacting with other passengers or holding business meetings with people on the ground,” says Hmkova.

A video of the cabin vision shows a young woman walking through a plane with sections of traditional seating rows, leather sofas and armchairs and even sun loungers in a cabin with transparent walls and roof.

Another area shows a glass bottom boat style viewing deck with bench seating, and private rooms that can be customised to include a desk with chair, bed, or lounger with coffee table.

Although it is likely to take more than 35 years for passengers to be able to drive or fly out of the open front of the plane in their cars when they reach the gate, as the video suggests.

“By offering different levels of experience within each zone, airlines would be able to achieve the price differential they need to operate a successful business, give more people access to the benefits of air travel and still look after the environment, adds Hmkova.

Suggestions from other sources appear more feasible today, although less comfortable for the passenger.

In 2010 Irish budget airline Ryanair proposed vertical seats, resembling leaning posts with seatbelts attached on flights of up to one hour, including its London to Dublin route.

The airline proposed removing five rows of conventional seats and two rear toilets at the back of its conventional 737s and replacing them with 10 rows of standing passengers.

It was reported at the time that some of these posts would be available for free, net of taxes and airport charges, while others could cost up to 10 euros.

However, amid warnings from safety regulators the plans never got off the ground.

Two years later Ryanair was at it again, proposing cabins with a standing room only section and handles instead of seatbelts.

“You don’t need a seat belt on the London Underground,” Michael O’Leary reasoned to UK daily the Telegraph in late 2012.

“You don’t need a seat belt on trains which are traveling at 120 mph.” Although his descriptions of an
aeroplane as “just a bloody bus with wings” and exclamation that “if there ever was a crash on an aircraft, God forbid, a seat belt won’t save you,” may have made aircraft safety regulators wince.

However, despite conjuring headlines every time Ryanair mentions the standing concept, little progress towards making it a reality seems to have been made.

A more comfortable concept from London-based firm Factorydesign, which was commissioned by Zodiac seats, is the Air Lair, featuring single seat cocoons stacked on top of each other.

The design features moveable seats than can be positioned to lie flat or upright with each pod boasting mood lighting on the ceiling, a projector to screen films and an iPod dock.

It was claimed the design would give passengers 30 per cent more room than traditional aircraft seats and provide more privacy. Although Factorydesign director Adam White admitted that the pods might present difficulties for disabled passengers.

Only time will tell which of these designs becomes a reality, although if recent trends are anything to go by it could be – the smaller the seat, the better for many airlines.