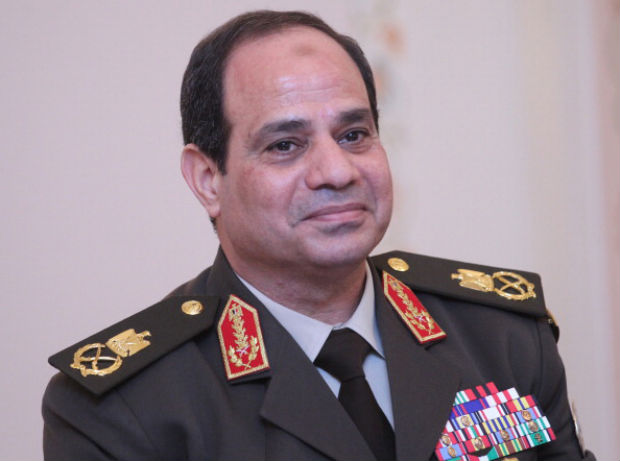 Egyptian President Abdel Fattah al-Sisi told visiting U.S. Secretary of State John Kerry that any global coalition against terrorism should battle not just Islamic State but other groups as well, the presidency said on Saturday.

Egyptian security officials have said Islamic State has established contacts with Ansar Bayt al-Maqdis, the country’s most dangerous militant group, which has killed hundreds of security forces since the army toppled Islamist President Mohamed Mursi last year after mass protests against him.

Egypt would certainly welcome strong action against Ansar as well as Mursi’s Muslim Brotherhood, which it has declared a terrorist group.

Sisi said any international coalition to combat terrorism “should be comprehensive and not exclusively target a specific organization or eradicate a certain terrorist hotspot”, the presidency said in a statement.

“Rather, the coalition should extend to encompass combating terrorism wherever it exists in the Middle East and African regions.”

Sisi also expressed concerns about foreign fighters in Islamic State and the danger they posed to their home countries because of Western passports that can get get them through airports undetected.

The statement added that Sisi “warned of the repercussions from the involvement of foreign militants in ongoing regional conflicts”.

Egypt’s foreign minister, backing Washington’s call for global action to counter the threat, said earlier in a news conference with Kerry that Islamic State militants in Iraq and Syria were forging ties with other extremist groups in the region.

Militant groups that share Islamic State’s ideology and “take Islam as a cover” must be dealt with, said Foreign Minister Sameh Shukri.

Egypt’s strong public support for the U.S. campaign against Islamic State contrasts with a mixed response elsewhere in the region and demonstrates how far Cairo has come in restoring its place as a premier U.S. partner in the Arab world since its authoritarian crackdown and military takeover last year.

“We will take all measures that are intended to eliminate this phenomenon altogether, whether in Libya or any other part of the Arab world or in the African continent in particular,” Shukri said.

But the specific role of many countries in the coalition remains unclear. Few have publicly committed to military action or other steps, particularly in Syria where a three-year civil war still rages. Europe’s response has been mixed.

But Islamic State stirred new outrage on Saturday with a video purporting to show the beheading of British aid worker David Haines. British Prime Minister David Cameron called it “a despicable and appalling murder,” and vowed to bring the killers to justice.

Egypt’s role is potentially crucial. Egyptian security officials fear they face a threat from Egyptian militants based across the border in Libya and from the Sinai-based Ansar Bayt al-Maqdis. Both are linked to or inspired by Islamic State.

Islamic State, fighting to redraw the map of the Middle East, has been coaching Ansar, which has carried out bombings and shootings, a senior Ansar commander told Reuters this month.

“Ultimately this extremist ideology is shared by all terrorist groups. We detect ties of cooperation between them and see a danger as it crosses borders,” said Shukri.

At the news conference, Kerry suggested Egypt, regarded as an intellectual hub in the Arab world, could exert enormous influence in countering Islamic State’s ideology from its sheer size as the Arab world’s most populous state to its powerful clerics.

The United States wants Egypt to use its leading Islamic authority Al-Azhar, a 1,000-year-old seat of religious learning, to send a message of moderation across the Middle East to counter Islamic State’s extremist ideology.

“As an intellectual and cultural capital of the Muslim world, Egypt has a critical role to play in publicly renouncing the ideology ISIL disseminates,” said Kerry, referring to the group by its former name Islamic State in Iraq and the Levant.

Kerry’s message in Cairo came two days after he urged Gulf Arab foreign ministers to suppress all financing of Islamic State, including private money in countries such as Qatar and Kuwait where U.S. officials say enforcement has been weak.

The United States called on each country to work with clerics to convey a message that Islamic State’s ideas are contrary to Islam, and to use their influence on regional television stations to broadcast anti-extremist programming.

Obama’s plan to fight Islamic State simultaneously in Iraq and Syria thrusts the United States directly into the midst of two different wars, in which nearly every country in the region has a stake against the backdrop of Islam’s 1,300-year-old rift between Sunnis and Shi’ites.

Islamic State is made up of Sunni militants, who are fighting a Shi’ite-led government in Iraq and a government in Syria led by members of a Shi’ite offshoot sect.

In Syria, Turkey has backed mainly Sunni rebels fighting against President Bashar al-Assad. Although it is alarmed by Islamic State’s rise, Turkey is wary about any military action that might weaken Assad’s foes, and is concerned about strengthening Kurds in Iraq and Syria.

Lebanese Foreign Minister Gebran Bassil told Reuters some Arab states at talks in Jeddah on Thursday had proposed expanding the campaign to fight other Islamist groups besides Islamic State, a move Turkey would also probably oppose.

Egypt would welcome any move that would further isolate the Muslim Brotherhood, which has faced one of the fiercest crackdowns in its history.

Egyptian authorities have killed hundreds of members and jailing thousands of others.

Qatar has asked seven senior figures from Egypt’s outlawed Muslim Brotherhood to leave the country, the movement said on Saturday, following months of pressure on the Gulf Arab state from its neighbours to stop backing the Islamists.

On Monday, Kerry will attend a conference in Paris that will bring Iraqi authorities together with 15 to 20 international players. The talks come ahead of a U.N. Security Council ministerial meeting on Sept. 19 and a heads of state meeting at the U.N. General Assembly later this month.