On Thursday, Sheikh Mohammed bin Rashid Al Maktoum, Vice President and Prime Minister of the UAE and Ruler of Dubai, visited the newly constructed Infinity Bridge in the emirate.

The bridge improves connectivity between Deira and Bur Dubai by raising the total number of lanes crossing the Dubai Creek from 48 to 60.

The bridge can accommodate 24,000 vehicles per hour in both directions and features a combined 3-metre-wide track for pedestrians and cyclists.

Consisting of six lanes in each direction, the Infinity Bridge that borrows its name from an architectural arch shaped in the form of the infinity symbol, is part of the Dhs5.3bn Shindagha Corridor Project. 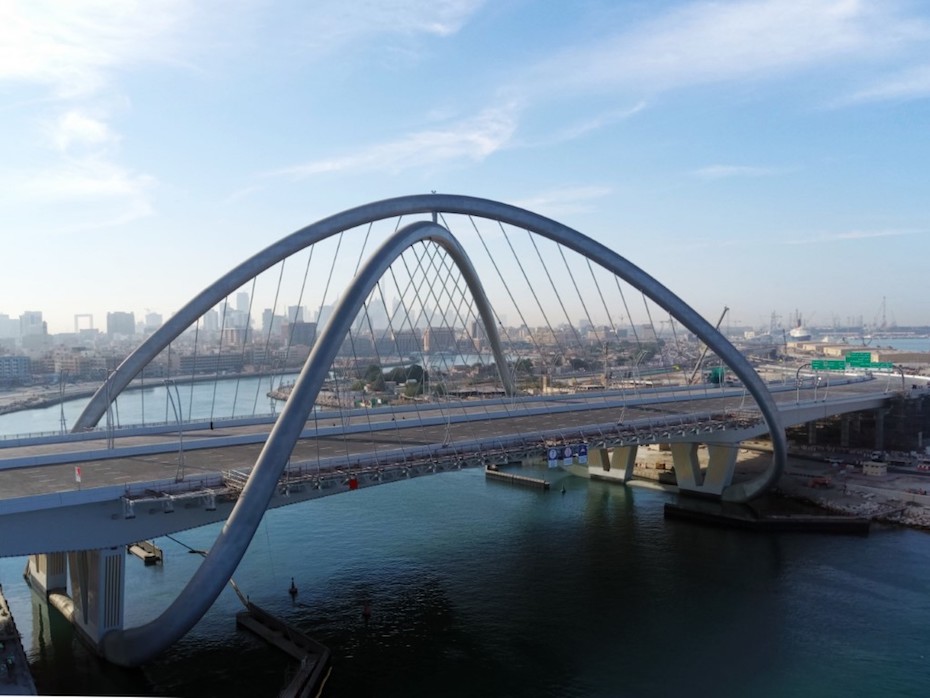 The 13km long project spans along Sheikh Rashid Street, Al Mina Street, Al Khaleej Street and Cairo Street and is being completed by the Roads and Transport Authority (RTA) in 11 phases.

Construction works for the project started in 2016 and is scheduled to be completed by 2027.

.@HHShkMohd: #Dubai government places the highest priority on projects that support sustainable development, meet the changing requirements of the community and provide it the highest quality of services. pic.twitter.com/GBki6GCZvA

The current section of Al Shindagha Corridor Project encompasses the construction of 15 junctions with a total length of 13km. Due to its immense scope, the project is being built in five phases. The completion rate in the entire section of the project has now reached 85 per cent and is expected to be completed in the second half of this year. The Corridor serves Deira and Bur Dubai in addition to several development projects such as Deira Islands, Dubai Seafront, Dubai Maritime City and Port Rashid, and is expected to serve one million persons. It will slash travel time from 104 minutes to just 16 minutes by 2030, and the time saved over 20 years will be worth about Dhs45bn.

Al Shindagha Corridor Project also features plans for improvements to Al Khaleej Street along with the intersection with Abu Hail Street, as well as the intersection of Sheikh Rashid Street with Jumeirah, Al Mina and Sheikh Sabah Al-Ahmad Al-Jaber Al-Sabah Streets. This phase is expected to be completed by the end of 2025.

Furthermore, the project also covers the construction of 1.5km long bridges leading to Deira Islands southwards, which is set for completion in 2027.

“The rapid development of Dubai’s roads and transport network, with investments exceeding AED140 billion over the past fifteen years, reflects our belief in the role a strong infrastructure base plays in enhancing our global competitiveness, creating new growth opportunities, providing a supportive environment for business and ensuring the highest possible quality of life for citizens, residents and visitors to the emirate,” said Sheikh Mohammed.

Among the other major road infrastructure projects in advanced stages of completion in Dubai include the Dubai-Al Ain Road improvement project which extends 17km from the intersection of the Emirates Road to Bu Kadra-Ras Al Khor intersection. Also, work is underway on the Sheikh Rashid bin Saeed Roads Improvement Corridor project which extends 8km along Ras Al Khor Road, runs from the intersection of the Dubai-Al Ain Road to the junction of Sheikh Mohammed bin Zayed Road which includes the construction of bridges extending 2km and will increase the capacity of Ras Al Khor Road to 10,000 vehicles per hour and slash the travel time from 20 to 7 minutes.