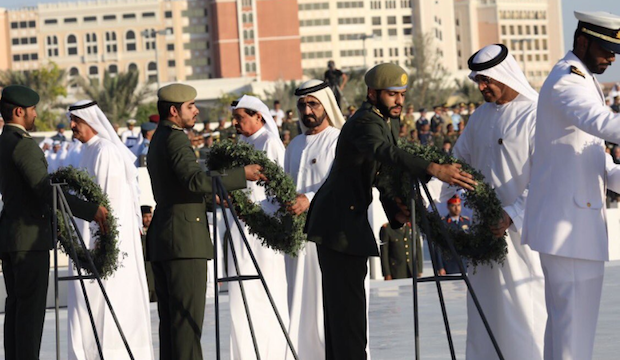 The UAE’s Vice President and Prime Minister and Dubai’s ruler Sheikh Mohammed bin Rashid Al Maktoum has ordered the construction of a memorial in Dubai to honour the country’s martyrs.

The monument will be inaugurated in November 2017, he said in a statement on Wednesday.

The announcement comes after the opening of the 46,000 sqm Wahat Al Karama (Oasis of Dignity) memorial site in Abu Dhabi on Wednesday by the UAE’s rulers, to mark the UAE’s second Commemoration Day.

Open to the public throughout the year, Wahat Al Karama consists of a series of metal panels supporting each other, featuring the name of each UAE martyr.

The park also includes a large plaza with terraced seating, public gardens, a pavilion and a pool that reflects the memorial.

“Commemorating UAE’s martyrs is a commemoration of the strength and the sacrifices of Emiratis. We are a nation who is not afraid of giving the dearest things we have including our kids for our country,” Sheikh Mohammed said.

“The bloodshed of our martyrs will be preserved, and their memory will remain elevated, and their sacrifices will remain a probity for Emiratis and a source of inspiration for future generations.

“In every corner of the UAE, a flag will be raised for martyrs, and the martyrs monument is in the capital near Sheikh Zayed Mosque, where the body of the founding father lays in peace. They will have a place in every corner of our land and heart commemorate their sacrifices and their souls.”